A number of the city’s new food and drinks have been nominated for a major design award. Here’s our pick to try this weekend. More than 20 Melbourne venues made the shortlist for the 2017 Eat Drink Design Awards, which are dedicated exclusively to the design of food and drink spaces in Australia and New Zealand.

Our finalists include a converted motor garage turned cafe-cum-greenhouse, a cork-ceilinged laneway bar and a futuristic coffee joint. This weekend, why not tick some of them off your list?

Arlechin
Guy Grossi’s sultry new laneway bar, designed by Six Degrees Architects, has a slightly subterranean ambience, with a low, concave Portages cork roof that’s lit like an old European wine cellar. And overhead spotlights that cast ominous, abstract shadows off industrial-chic weight-and-pulley downlight shades. The bar is a long white-marble countertop with a decadent silver fruit bowl in its centre. It looks a little like the Holy Grail scene in Indiana Jones and the Last Crusade, with rows of dimly coloured, liquor-hued bottles illuminated behind the bar like chalices. The wine bottles, too, seem a little sacred, stored inside glass-encased walls. The space was originally the ground floor of the State Trustees building until the owner renovated and sub-divided it two years ago. Initially, the Grossis used it for storage and eventually to house their very large wine cellar.

Stomping Ground Brewing Co.
Despite all the beer and the gleaming fermentation tanks looming next door, Stomping Ground doesn’t feel like a typical brewery. Or a pub. It’s something else entirely. Maybe that’s down to the two big braziers that warm the site. Or the retractable roof that covers a quarter of it. Or the potted trees, climbing vines and other greenery. There’s really nothing like it in Melbourne. Brass, timber and black iron give the 250-patron site the look of a Victorian-era factory or train station, with vintage-industrial finishes by interior designers StudioY.

The George on Collins
Designers Hecker Guthrie gutted the basement room here to reveal the heritage brick archways and brickwork of what was once a department store. The walls and ceilings have been painted a crisp, bright white, punctuated by textured curtains that draw attention to softly lit booths. The main dining area is divided by an imposing granite bar, where diners can perch with a drink or dinner. The design is all about emphasising the heritage space without sacrificing its implicit modernity.

Uncle Collins Street
Occupying the first floor of a former office building, Uncle Collins Street has large fold-out windows that open to leafy, treetop views. Foolscap Studio’s design is refined, with spirit. Cane furniture and pink and orange lights create a fun, tropical vibe. As at the St Kilda original, a large central bar is a key feature, as is the colourful ceramic crockery.

Giant Steps (Bergman & Co)
Moody, atmospheric, simple but beautiful. These were the words Phil Sexton, owner of Giant Steps Winery, gave interior designer Wendy Bergman, when planning the winery’s complete redesign. “It has that ‘coming home’ lounge room, relaxed and earthy feeling about it,” Bergman says of the new space. High ceilings with timber panelling oversee a room in a palette of earthy browns, greens and mustards. Glass windows with timber shutters have been kept from the original build. Leather-cross booths allow diners to look out onto the restaurant, and Bergman’s husband, industrial designer Paul Grummisch, created dramatic but contemporary chandeliers that hang throughout. The wine wall is filled with individually hung leather slings attached to metal brackets that cradle hundreds of wine bottles.

Atlas Dining
Architects Belinda Pajkovic and Tamara Frangelli of GelliKovic designed this ambitious new restaurant that features leather banquettes, white birch timber and a four-metre-wide brass compass on the ceiling. It’s airy but sleek, and dominated by warm wood. Atlas’s cuisine changes every four months, and the menu will change weekly: longitudinal lines criss-cross the venue, with new coordinates to be added every time Atlas shifts its food map.

Etta
Each of the two polished rooms that make up Etta centre around large and expensive-looking Australian stone benches, crafted from marble from a quarry in Chillagoe, northern Queensland. The restaurant’s concrete walls are cut a few inches from the ground, exposing some of the building’s raw brick, and overhead there’s sleek Finnish and Italian lighting. Designer Iva Foschia restored some of the space’s inherited features (it’s hard to believe, but this place used to be a fish-and-chip shop), including the stone floor in the front section and hardwood floorboards in the back. The goal was to keep things simple. Outside of the impressive rock collection and a playful forest mural by local artist Rob Bowers, the place is fairly unadorned.

AU79
This cafe, bakery and roastery feels like an indoor botanical garden. Once an old motor garage, this space has been transformed by Melbourne-based Mim Design, with stained cement floors and old tyres. Interior windows reveal a self-contained roastery and a bakery and patisserie. Au and 79 are the chemical symbol and atomic number for gold, and when you arrive at the cafe on Nicholson Street, you’ll see its gold standard: the name spelled out on a shiny, metallic gold sign attached to the dark brick building.

Workshop Brothers Glen Waverley
The owners of this Asian-inspired cafe worked with design firm Studio Esteta to ensure the space could easily transition from day to night. Circles, present in many old-style Chinese restaurants, are incorporated through plywood arches. The interior is covered floor to ceiling in blush-pink paint, lifted with sophisticated gold-fixture lighting to create a bright, lively space. “The design celebrates playful clichés of retro-styled Asian restaurants coupled with our own memories of these places,” says Sarah Cosentino, director of Studio Esteta. “That includes plum accents and pink hues.”

Cromwell Streat
Cromwell Manor, a heritage site, has been a pub, a brothel and an art gallery in its 150-year history. Now it’s an 80-seat cafe, bakery and state-of-the-art coffee roastery. The original brick walls still stand, stained with soot from the chimneys. Six Degrees Architects created verandas and walkways that run alongside a landscaped garden and courtyard, giving you the sense of being somewhere outside the city.

Sensory Lab
Tucked away in the recessed thoroughfare of an office building, Sensory Lab feels like a secret uncovered. The design by Foolscap Studio is a nod to Japanese efficiency, with no wood or tiles in the space – the materials instead give a sense of the high-tech. Huge stainless-steel benches gleam like an Ajax ad, while a healthy dose of cork adds texture. Sit-down patrons can get their morning news from iPads that are placed along the bar-style counters. Takeaway coffee is a major focus here, so a service window – designed to emulate a “vending machine” – keeps service quick and efficient. Sensory Lab’s retail manager Lachlan Ward describes the effect of this rounded, port-style facade as a futuristic Japanese-meets-1950s-American diner. In keeping with the theme of efficiency, the food is all about toast and it’s taken as seriously as the coffee. A huge, conveyor-belt style toaster dominates the counter, through which passes some of the best bread in Melbourne. 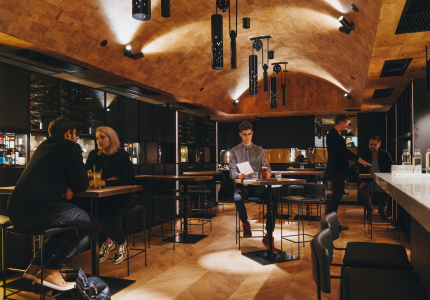 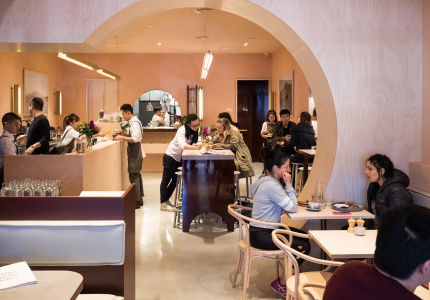 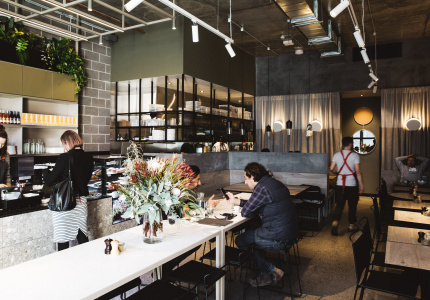 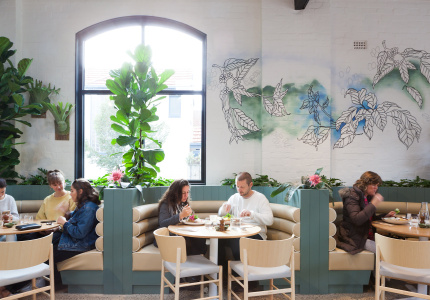 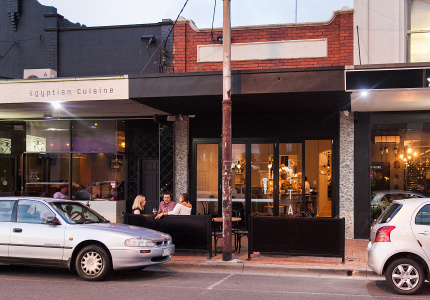 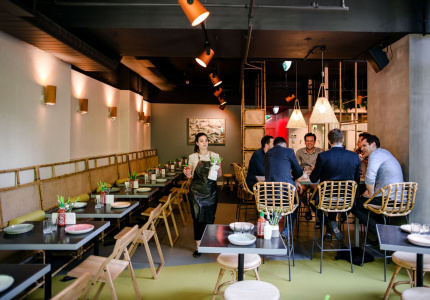