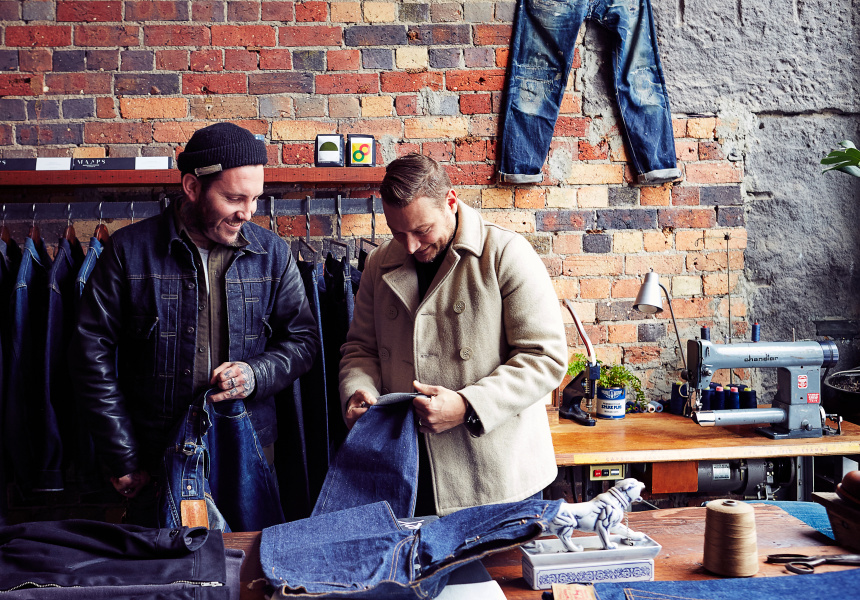 You probably haven’t heard of half the brands in Martin Kirby’s store on Brunswick Street. Or perhaps you have but haven’t been able to buy them outside Japan. Whatever your familiarity with the premium Japanese denim stocked at Godspeed, the short story is this: it’s all extremely good, it’s extremely easy to wear, and because every man and his dog doesn’t have the same jeans, you’ll feel extremely special.

For the denim dedicated, buying a pair of Radiall, Rough and Rugged, TCB or Edwin jeans is a bit of a rite of passage. Godspeed offers repairs and alterations to a ridiculous level. Take the thread in the rare darning machine which has been prepared by “farm-to-closet” label Buaisou, which grows its own indigo plants and dyes its own yarn for its jeans.

Especially dyed for Godspeed’s alteration service, the cotton matches perfectly to a pair having a hole repaired. It’s practically invisible and, as a result, will age like the jeans themselves.

Jackets and shirts, alongside Redwing boots and Ebbets Field Flannels caps, round out the Godspeed selections that will have you looking like a motorcycle mechanic in due course. Fitting, because Kirby got the store’s name from the Japanese documentary, God Speed You! Black Emperor (from which the Canadian post-rock band also took its name). The film documents the bosozoku motorcycle movement in the 1970s and follows the exploits of the Black Emperors motorcycle club.