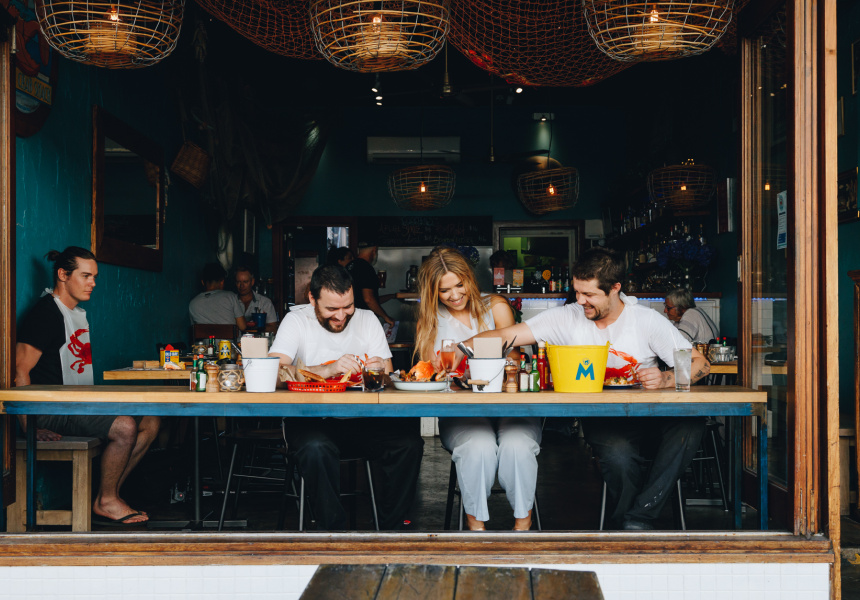 Baby potatoes, wedges of chorizo and corn-on-the-cob swim in a cloudy bronze pool of butter and spices, capped with boiled South Australian blue swimmer crab. This is Katie Marron’s take on a Southern-style crab boil.

In its American homeland, a crab boil is a social occasion, with huge pots of spiced seafood and trimmings cooked together, then tipped onto a table covered with newspaper from which everyone grabs a feed.

At Miss Katie’s Crab Shack’s permanent home in Fitzroy, things are slightly more civilised. Slightly. Don a plastic bib and grab a pair of claw crackers or a mallet, before using a dainty crab fork to pry out the soft meat and dunk it in the butter. Tip: don’t wear white.

If you don’t like the idea of having to “de-crab” post-meal, there’s a range of other Southern snacks such as fried green tomatoes, prawn-cocktail rolls, soft-shell-crab burgers and fried chicken with waffles. There will be $2 oyster happy hours from 3–6pm every weeknight and bottomless Bloody Marys from 12–3pm on Saturdays.

Marron’s mother’s family is from Maryland, and her seafood recipes come from the pages of a great aunt’s cookbook – Marron has been cooking them with her mother since she was young.

Marron worked in the kitchens at Movida, The Grand Richmond, and Eau de Vie before North Melbourne’s Public Bar approached her to do something out of their kitchen in 2013. She adapted some family recipes, and her take on the crab boil was born.

Since then, Marron’s had residencies at Fitzroy’s Rochester Hotel and Brunswick East’s Alehouse Project, but a permanent shack was on her agenda for years before it became a reality.

She started gathering knick-knacks for the venue in 2013, including the old fishing nets draped on the walls, and the giant shark’s head, named Dorothy Mantooth, mounted above the pass.