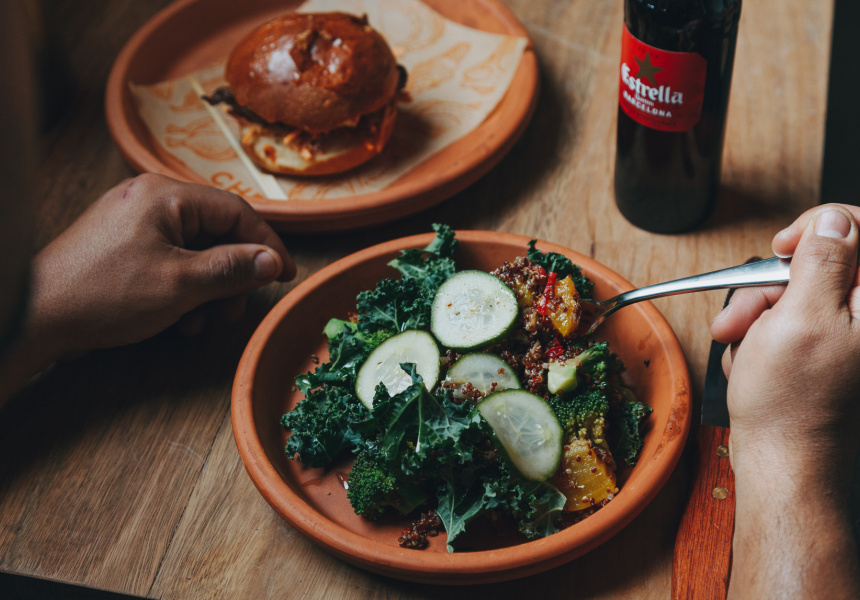 CHE is Peruvian chef Alejandro Saravia’s high-ceilinged diner with a focus on takeaway. "Che" is Spanish slang for “buddy” or “mate”. Here, it's also an acronym for chicken, helados and empanadas – the three main items on the menu.

The vibrant 40-seat diner is accessed along the Johnston Street side of the old Fitzroy Post Office (take note because the address will steer you to Brunswick Street) and is the third venture for Saravia and his partners David and Michael Parker, and Renee and Jason McConnell, the team behind San Telmo and Pastuso.

Concept Design took charge of the festive but sophisticated space. Indoor plants and lightbulbs hover from the ceiling. At night, the space is accentuated by a fluorescent yellow glow that radiates from three large neon letters inside the windows, spelling out the name of the diner. An enormous Fileteado-inspired street-scene mural by Open Season runs from the floor to the ceiling.

CHE’s main attraction is chicken and chips. The style is based on a mainstay Peruvian variety called Pollo a la Brasa – a Saturday take-away tradition that Saravia grew up with in Lima. He marinates his birds in a Peruvian spice mix and dark beer for two days before cooking up to 35 at a time in a large rotisserie-style charcoal oven.

Sides and add-ons include various salsas, sauces and special salts (including the house-made chicken salt), plus Saravia’s crunchy hand-cut fries.

The Argentinian-style empanadas are large and golden, and probably veer into starter or snack territory, and come in a chicken, corn and cheese or two different beef versions.

The helado – ice-cream is dulce de leche-flavoured soft-serve. You can get it in a cone or sundae with roasted macadamias and malbec and blueberry jam as add-ons.