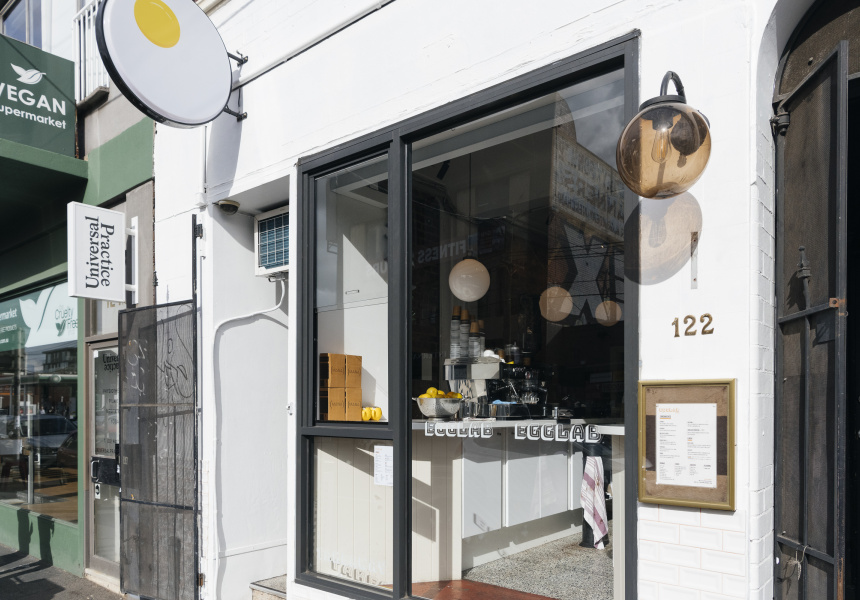 At Egglab, dishes are inspired by the breakfast burgers that owners Greg Papas and Jana Andrianopoulos discovered travelling overseas. It first opened on Smith Street in 2017, but when the lease ended they decided to set up a bigger shop a few blocks away on Johnston Street.

And while it still pumps out egg-based breakfasts in various forms, stuffed expertly between two slices of bread and served in three minutes, the new Egglab is a lot truer to their original vision than the first. The Johnston Street location is an open space with lots of exposed brick, wooden countertops, whitewashed walls and yolky orange accents. A neon egg sign greets you when you walk in, and the round white pendant lights are a little eggy, too.

One highlight is the Vodka Chilli Scramble, with just-set scrambled eggs flecked with chilli and feta and sandwiched between two pieces of soft, toasted brioche with peppery rocket and tomato relish. Another standout is the Benny – a fried egg with bacon, wilted spinach, hollandaise and fried potato sticks for crunch. Old favourites such as Mr Potato Head, with a fried egg, a hash brown, house-made relish and cheddar aren’t going anywhere either.

Cold-press and espresso coffee is courtesy of Allpress, and there are milkshakes and homemade iced tea.