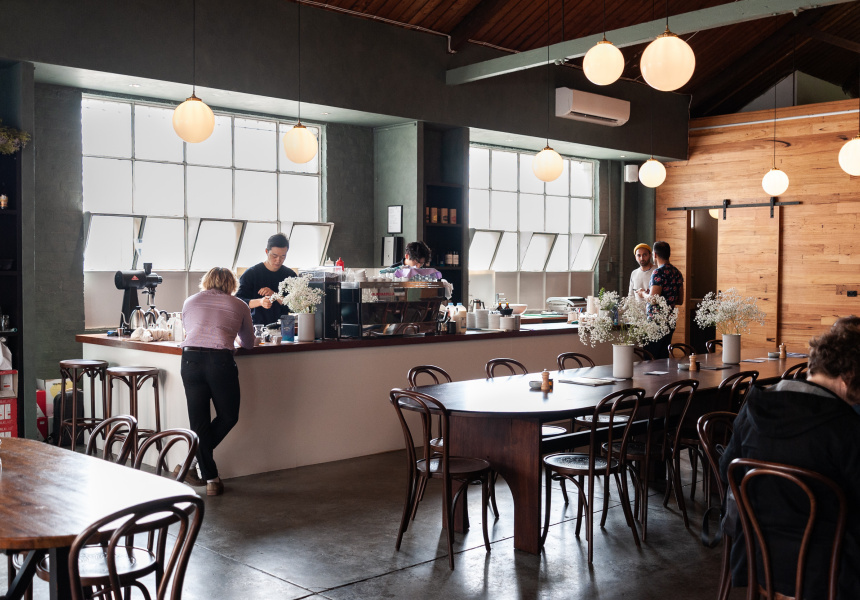 On Moor Street in Fitzroy there’s a big, white, warehouse-looking building near the corner of Brunswick Street. Despite its prime real estate, it’s easy to miss. Perhaps that’s the reason the site has seen a lot of turnover, though it’s led to a diverse history.

Co-owner Anoop Lokkur has heard rumours that it was originally a hotel, when Fitzroy became Melbourne’s first suburb in 1839, then named Newtown.

More concrete evidence points to the site’s later life as a city stable. Lokkur points out pipes running down the back-corner wall that were used to fill horses’ water troughs. In recent history it has also been cafe Something More, and until now, an art gallery.

But the site’s inconspicuousness is what Lokkur and his business partner – and friend of 10 years – Avtar Singh love about it. There’s no loud, obvious signage calling people in off the street. People have to know it’s there.

Lokkur grew up in Bangalore, India, where he’d meet friends at the local cafe, but this was before Starbucks and other large, commercial coffee shops opened in the city – cafe owners remembered your name and you could pay your account once a month. That’s something Lokkur and Singh are doing at Louis, too.

In this roomy cafe, comfort is paramount to the pair, hence the vast spaces between the tables. They didn’t want anything stark or sterile – instead, the focus is on organic, relaxed and intimate vibes.

That said, the spectacular corrugated-iron ceiling and exposed rafters are worth a look up. The original white plasterboard walls have been painted a soft, forest-olive green (a colour custom made by the painters and named “Louis”). Looking around, many smaller details tend to be rounded or gently curved – playing off the hard lines of the rest of the space – from the low-hanging orb lights, right down to the edges of the dark coffee-brown timber tables, and the leaves of native plants in vases on each table.

Lokkur’s background is in filmmaking and project management, and has spent some time working front of house at cafes Square and Compass and Bawa. It was at Bawa that he met Cafe Louis’s head barista Ki Yong Jung, who’s now brewing Vacation coffee and rotating filter beans at Louis’s brew bench.

The menu of familiar brunch classics caters generously to vegans and vegetarians; the majority of dishes have a meat-free option.

Gelataria Primavera at Spring Street Grocer has created a vegan pistachio gelato for the fluffy dorayaki (Japanese sweet pancakes). They’re filled with a banana and coconut cream, inspired by a banana pudding-like dessert called rasayana that Lokkur’s parents made at home.

The popular granola is presented scattered around an egg-free and dairy-free bavarois (like a panna cotta) of coconut yoghurt.

Another (non-vegan) standout is the generous serve of scrambled eggs. They’re folded with a fragrant Indian green-chilli mixture and served on pesto-slathered toast with manchego cheese, caramelised onions, fresh cherry tomatoes and crisp bacon. That’ll be the one to keep the locals coming in.