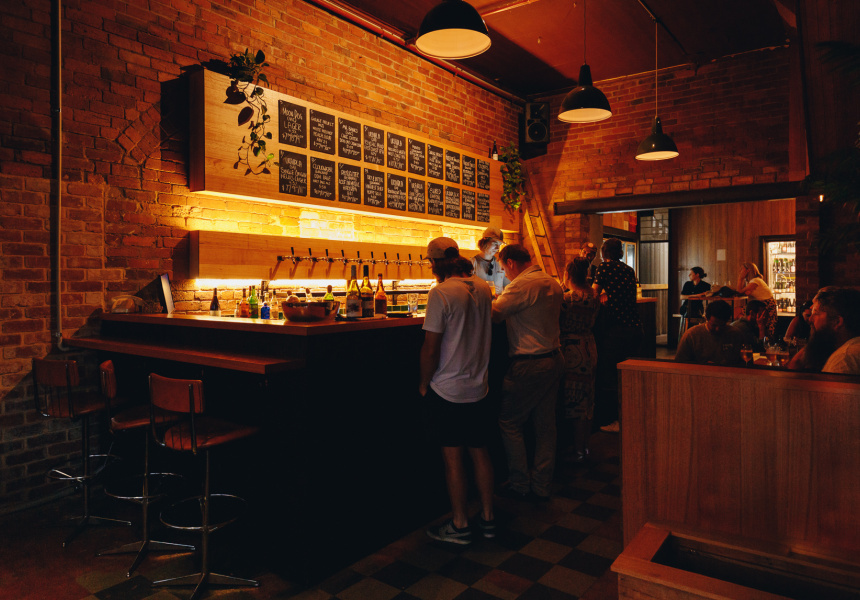 Photography: Courtesy of Near & Far
1/14

Beer geekery is highly encouraged at Near & Far. It’s long been one of Fitzroy’s craftier venues, with 18 rotating taps pouring a line-up of local and international brews. There’s also a strict focus on independents, which means you won’t see any of the major players chalked up on the blackboard.

Instead, you’re likely to see wild-fermented ales by Future Mountain; fruit-forward sours by Bridge Road; and a clutch of different styles by Kaiju and Moon Dog. From abroad, it might be a dry-hopped raspberry sour by Canada’s Collective Arts, or a New England IPA by American brewery, The Veil. A “no pretension” rule means there are always accessible options, and staff are happy to talk through craftier picks. There are also local and imported wines, plus a handful of cocktails to round out the offering.

The bar has exposed brick walls, green tiles and a red-painted concrete floor. Booths line the wall and leather seats surround the long Tasmanian oak bar. Upstairs there are two rooms filled with comfy retro furniture. One looks out onto Brunswick Street, and the other is styled like an ’80s living room with a skylight, couches and vintage stereo (BYO cassette tapes).

In 2021, Near & Far took over the space next-door with a much larger bottle shop and three additional taps. Now there are 12 fridges stocked with a more than 450 beers, plus natural wines and ciders. Also, extra outdoor seating on Rose and Brunswick Streets.

The other notable addition was Jolly Good Sandwiches, a permanent sandwich pop-up by former Gimlet sous chef Raphael Exton Pery. Expect two-handers such as chicken with citrus-herb mayo, cucumber and lettuce; and a French dip number with roast beef, swiss cheese and stout gravy for liberal dunking. You can also “reverse BYO” – order from one of the surrounding restaurants and have your meal delivered.