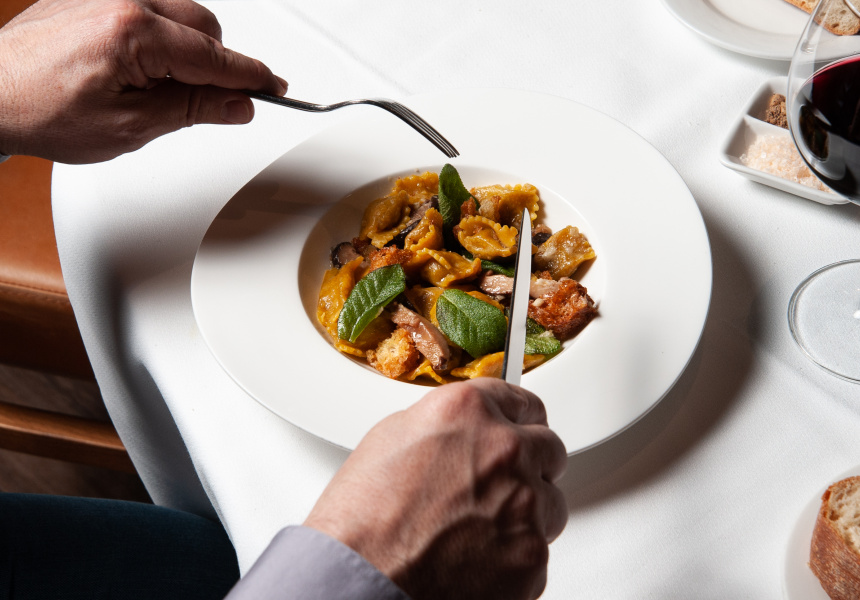 Matteo’s opened on the quiet Fitzroy North end of Brunswick Street in 1994. The neighbourhood has changed a lot since then. As for Matteo’s? Well, it has and it hasn’t. And that’s the best thing about it.

When it opened, the restaurant was little more than a two-person operation; the eponymous Matteo Pignatelli handled front-of-house and his wife Franca cooked. Since then Pignatelli has attracted chefs from a variety of backgrounds to cook numerous cuisines – Scott Pickett (Matilda, Estelle, Lupo) most notably.

Pignatelli has always trusted his chefs to cook what they like, within reason. This canny approach has helped the restaurant to keep its contemporary edge despite its traditional leanings.

The current menu is a broad take on contemporary Australia. That might mean braised wallaby tail agnolotti, or angel hair pasta with fresh spanner crab to start. On the larger end, toothfish topped with native-herb pesto, or roast duck breast with leatherwood honey, duck parfait and mustard pear. For dessert a “Negroni” combines orange and gin sorbet with vermouth ice-cream, Campari gel and Italian meringue.

While Prignatelli gives his chefs free rein, the wine list is less up for debate. There’s not an orange wine in sight, and probably never will be. The list hews classic, and the knowledgeable staff (many of whom have worked at the restaurant for a decade-plus) will steer you towards a bottle that will suit your tastes without being too wallet bruising.

In the front dining room – which seats 45 – white tablecloths dominate, watched over by elegant paintings by local artist Marian Rennie. Things are more casual in the back dining area. Private dining has been a big part of Matteo’s, and there are several rooms to suit a variety of functions.