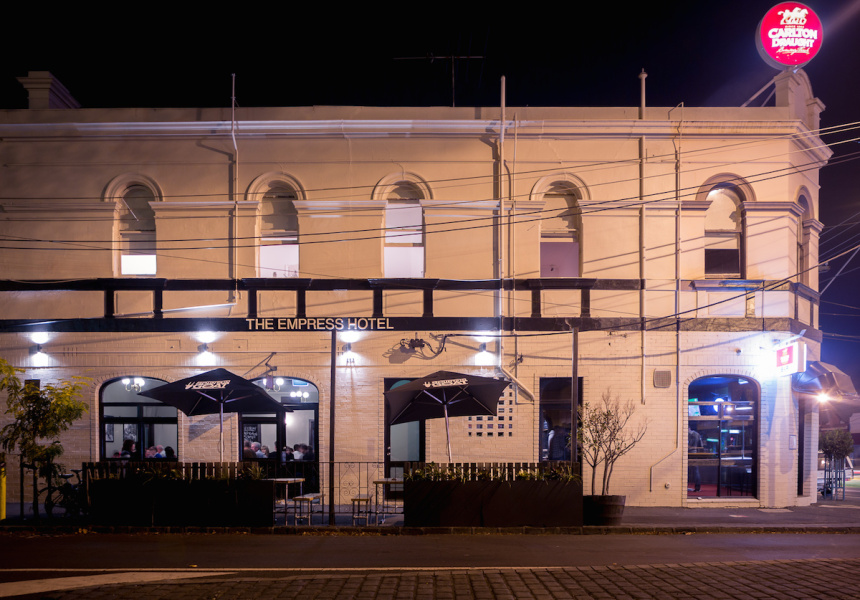 The 141-year-old Empress Hotel has a storied history. Before its current incarnation, the pub was once a live-music stronghold in the vein of the Espy, the Corner or the Tote. Now that’s just history, as owner Guy David (who also runs Markov) tore the roof off the old bandroom to create a beer garden. It has a cosy, lived-in vibe that will soothe any sad feelings about the absence of live music.

Inside, many of the building’s historic features have been retained, including the pressed-metal ceilings, red-brick bar and ceramic urinals, while the bar's taps have been updated. It now has 15, with one dedicated to pouring a new drop every two-to-four weeks. Permanent beers include Carlton Draught, 4 Pines Kolsch, Mountain Goat’s Steam and Summer Ales, and other easy-drinking locals. The Empress doesn’t want to alienate anyone.

The menu, by David’s sister Lucy (ex-Rosa's Kitchen, Pei Modern, Coda), sticks broadly to this theme. It leans on the pair’s Italian heritage with lasagne, gnocchi and simple pizzas, without neglecting pub staples such as burgers, parmas and steaks. There’s no table service, a fact reflected by the prices, which hover around $20 for a main. This is a real pub, through-and-through.