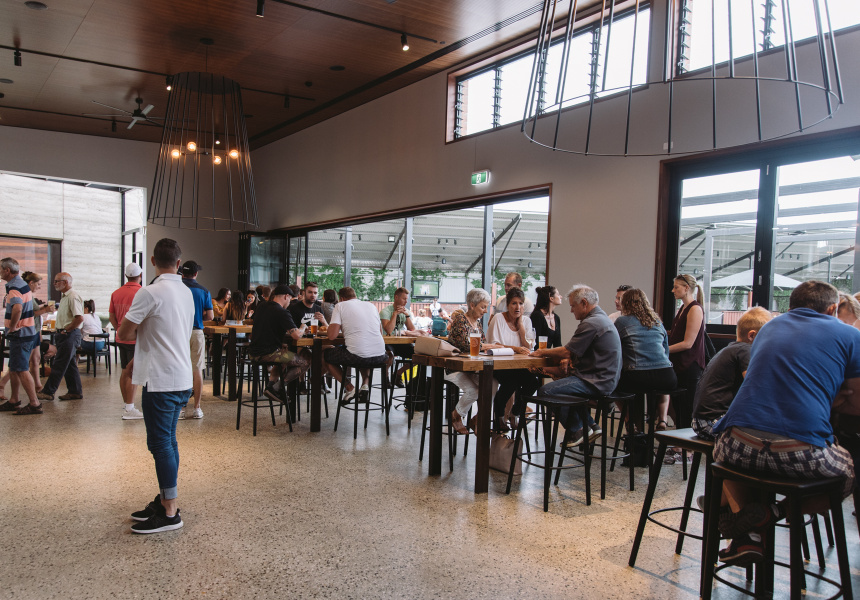 Lee Freedman and his three brothers have trained some of the greatest horses in Australian history: Subzero, Doriemus, Makybe Diva, Mummify. Until 2014, the family was based at Markdel, a 37-hectare site near Gunnamatta on the Mornington Peninsula.

The property has been operating as St Andrews Beach Brewery since Christmas 2017. Sixteen of the old horse boxes are now private booths named after champions (bookings essential), which flank the big, kid-friendly courtyard at the entrance. Keep going and you’ll reach the high-ceilinged bar and glassed-in brewhouse. The 180-patron space feels a little corporate, but when it’s full of happy drinkers you’ll barely notice.

Behind this main building, the former 1200-metre training track has been turned into an orchard with 8000 apple and pear trees. The team plans to make cider in 2022, once the trees start fruiting.

The 25-hectolitre brewhouse produces just four beers: a lager, pilsner, golden ale and pale ale. All were devised by Dermot O’Donnell – a master brewer who started his career in 1967 and later worked at Tooheys, CUB and Asahi, where he created the Cricketers Arms range.

Like Cricketers Arms, this core range won’t excite routine beer drinkers, but it does fine for an afternoon in the sun with some mates.

The broad menu includes seafood, salads, pizzas and burgers. Beer food, for the most part. Grab an outdoor table, order a bunch of stuff and take in the salty air.