Friends and fashion designers Michael Lo Sordo and Christopher Esber came together to talk about the industry, their struggles and their future. We listened in. 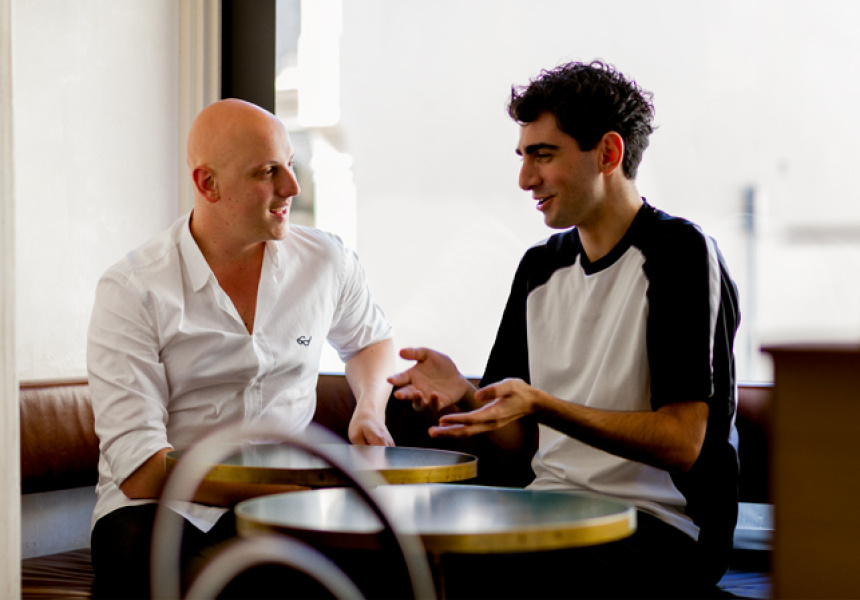 Together, Michael Lo Sordo and Christopher Esber could be said to represent the future trajectory of Australian fashion. Although they question whether or not they could still be considered emerging designers, the two are certainly beginning to make their mark. Earlier this year, Lo Sordo took out the Qantas Spirit of Youth Award for Fashion and both he and Esber were nominated for the LMFF National Designer Award, which Esber eventually won. But far from being rivals, the two have formed an intimate friendship, which sees them catching up every week for gossip and advice. We sat in on a conversation just before Mercedes-Benz Fashion Week Australia (MBFWA), where the two talked about their shows, the local industry and where they’re going next.

MLS: I hear you’re introducing menswear at fashion week; is that correct?

CE: I’m probably more excited about that than women’s.

CE: You’re showing off site, that’s pretty new for you?

MLS: We’ve decided to do a really intimate, small show – maximum 100 guests – so there’s no fuss, there’s no craziness. It’ll be our fifth year this year at fashion week and our first time off-site as you said. The work doesn’t get any easier, but I think every year you just manage to and you learn how to go about doing things. How do you find the Christopher Esber label growing?

CE: I’d like to work on more of an international focus. That’s why we went to New York recently and I want to keep going there every season and kind of maintain those relationships.

CE: We met some amazing people so I just want to always go back and show them the next season and get to them to really embrace me. I think menswear, I’m excited, that’s a new thing…

CE: It will just be whether it works. But I’m not constraining myself at all. I’m doing exactly what I want to.

MLS: I always find that we’re always working on the littlest budget ever. All the time. I think, though, in one way it’s good because it pushes us to be more inventive and creative in a cheaper way.

CE: It’s always the case when working on winter. I feel like fashion week went past and budget is blown and you do winter on pretty much nothing.

MLS: But I always find that your stuff is more creative in winter.

CE: Yeah, I like doing tailoring and I hate, hate tailoring in silk. I hate it. I think this collection for fashion week is the first time I’m actually happy with the fabrics. I’ve just picked purely based on concept.

MLS: I feel the same. It’s so hard because we’re pressured from every angle, you know, selling, PR, this, that. So that’s what’s really important, to keep to your own. No one knows the label better than you do, and where you want to take it. I mean, people can guide you in a way and we’re forever grateful for the guidance that we get from the people that we work with…

CE: But at some point you need to actually look at what you want and if things start moving around too much you need to go back.

CE: I think having a more international presence would be good. I mean, there are definitely things that help young Australian designers, but there’s not enough. But when you look overseas, there are a lot more opportunities.

JB: Do you think there’s a point where you think, ‘Now I have to go overseas’?

CE: Well, that’s what we kind of started doing – going there and starting from the ground, really. Going to parties, emailing people, meeting with certain publications and stores, which was kind of successful. I’m surprised I met with as many people as I did.

MLS: There are avenues and things like government funding.

CE: But with the government funding, you need to be making a certain amount of money to actually be eligible. Do you really need that grant if you’re already making all this money.

MLS: How does that make the industry grow? It doesn’t at all. It makes it go backwards because it prompts us to go overseas, then you lose us. That’s the tricky thing.