An Australian in New York at Proenza Schouler

She was chosen as the winner of the prestigious Australians in New York Fashion Foundation scholarship in 2010. Now she’s undertaking a coveted internship placement at Proenza Schouler. We chat with Laura Wade to find out how things are going in the Big Apple. 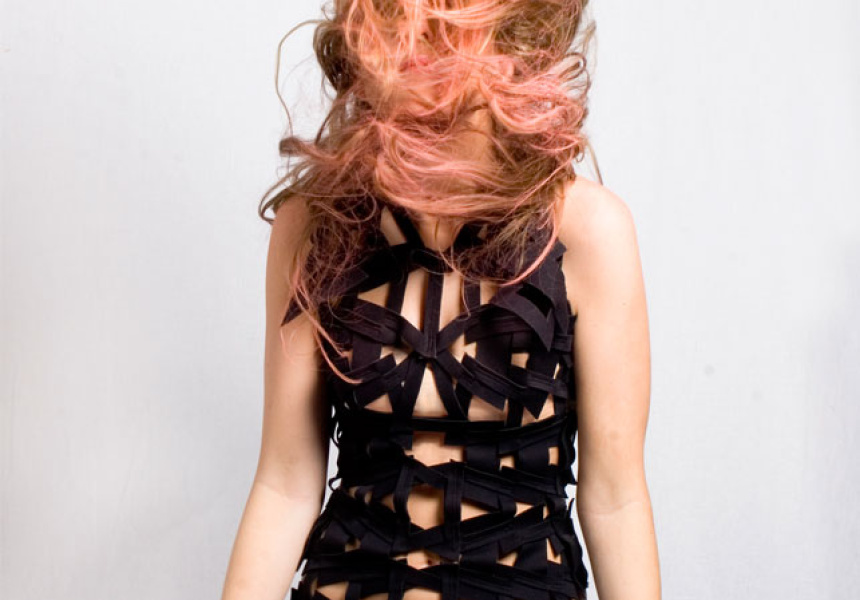 Throughout her final year at RMIT, Laura Wade’s motto was, “If you don’t know the right way, you can’t do it the wrong way.”

“I could never really get across the design process in a traditional way,” she says. “I’m not that good at sketching or draping, so I tried to create my own design process.

Essentially she builds her garments, rather than sketching and sewing them. Put simply, her designs push the limits of construction. For example, she made a paper knitted dress that is nothing like a knitted dress you’d see in a retail store, stretching the concept of knitting by using complex structures that couldn’t be produced by traditional hand knitting but instead via repeated loops.

She experimented with materials like wire, foam and paper before deciding to use neoprene to create her final collection. Using a laser-cutter she fashioned the material in geometrical designs and then shaped them into wearable garments.

Wade explains that working without a traditional knowledge of garment construction opened up limitless possibilities. “The whole [final] year was about problem solving and finding the best way for me to design.”
The results were enough to impress the Australians in New York Fashion Foundation (ANYFF) judges, who rewarded her creativity and talent with the prestigious scholarship last year. Now she’s learning the tricks of the trade at one of America’s most prominent fashion houses, Proenza Schouler.

Founded in 2002 by Jack McCollough and Lazaro Hernandez, Proenza Schouler has been dubbed the future of American fashion. A title that has just been cemented with an affluent group of investors giving the label the financial boost it needs to take the fashion house to the next level.

It’s been quite the introduction for Wade. She arrived in New York four months ago and has been flat out ever since. “It’s gone quickly,” she chuckles via skype. “I pretty much started my internship at Proenza as soon as I got here.”

Following an honoured Australian tradition, Wade crashed on her friends couch in downtown NYC for her first month. And after only slightly overstaying her welcome she is now living in her own Brooklyn apartment with two fellow Melburnian housemates.

As can be expected, Wade admits the first few weeks in New York were intimidating. “Coming over here, you don’t really know what to expect. Everything is on such a large scale and with the expectations that come with the scholarship, it all builds up in your head.”

But it’s all worth it. “Seeing everything firsthand and understanding this market is invaluable.”

Proenza Schouler was at the top of Wade’s wish list. “They are two of the most talented designers and I have huge respect for their work,” she says. “I was really lucky they had space for me.”

Wade is working as a design intern but she’s also helping out around the studio in all the departments. Which has given her the opportunity to follow the collection through its journey from conception to runway. “It’s been great. I saw all the samples being made and the photo shoot. Then the week after was business mode in the marketing department seeing how they sell the clothes,” she says.

Seeing how much work goes into each collection has given Wade even more respect for the designers. “They’ve positioned themselves in the market really well. With each collection they’ve quietly stepped up and people really respect them.”

So what are the two ridiculously talented, young designers really like? “The guys themselves are really, really, really lovely,” says Wade. “They aren’t diva New York designers at all. They are fantastic people and have been amazing mentors. To have their professional support is amazing but to have got to know them personally and have their belief in me is something I am really proud of.”

Suffice to say, Wade can’t praise the ANYFF initiative enough. “It’s opened doors for me that I would have never dreamed possible at such an early stage in my career.”