One of Melbourne’s most experienced barbers is bringing his family’s story to his new space. 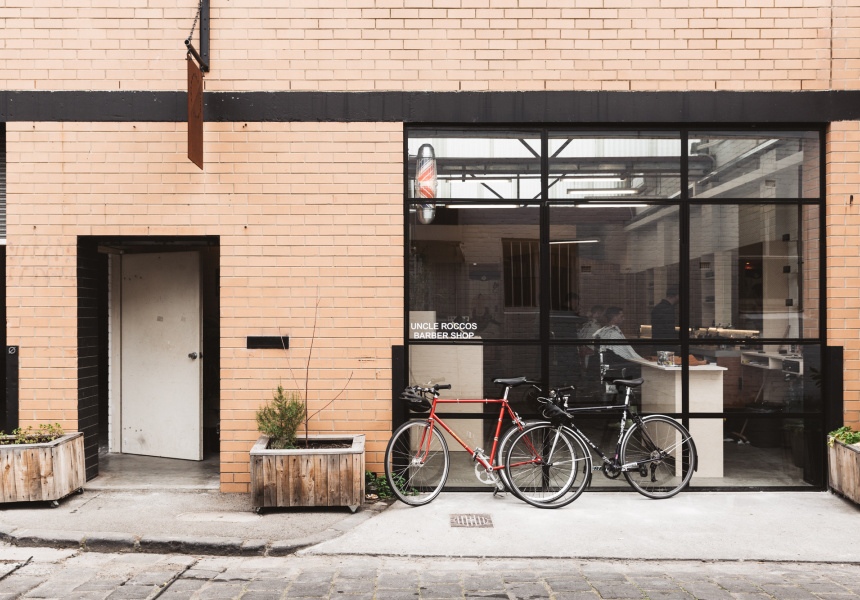 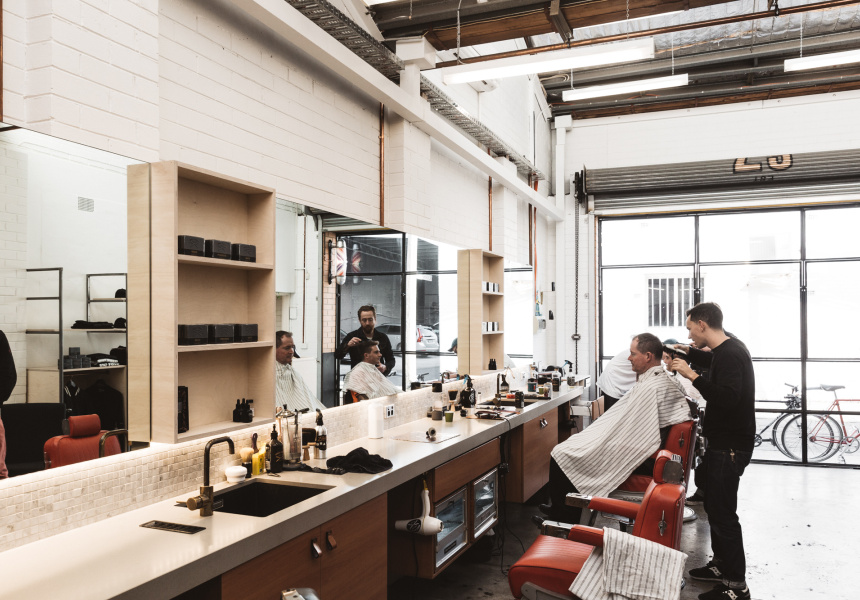 Uncle Rocco’s Barber Shop is a family affair. Owner Fab Sfameni is a third-generation barber who’s been fading and styling his way around Melbourne since 1995. His latest barber shop in South Melbourne shares premises with Melbourne Moonshine.

For the new South Melbourne shop, Sfameni enlisted his wife Michelle for the fit-out. She’s designed a light-filled industrial hangar that’s softened by wooden furnishings and mid-century accents. It’s as playful as it is tasteful. Japanese artwork sits easily next to the gleaming space-age fireplace.

“I want people to come in and have the experience and feel like they’re in their lounge room at home, with their mates, drinking a beer,” says Sfameni. “For me this is my mancave.”

Rocco’s gets its name from Sfameni’s uncle, a 92-year-old barber who ran his own shop in New Jersey. “Rocco looks like the Pink Panther,” says Sfameni. “He’s always got a smoke hanging out of his mouth and he’s got this real skinny body and these big feet … he’s a real character.”

Although Rocco’s long since hung up the scissors, according to Sfameni, he still dishes out pearls of wisdom. “Here’s a quote from Uncle Rocco: ‘Some guys will cheat on their girlfriends and sleep like a baby at night, but feel guilty when they go to another barber shop’,” Sfameni recalls. “It’s such a true saying.”

Rocco’s got a hair product named after him in Sfameni’s range, as does his father, Santo, and his grandfather, Francesco.

The hair-product range is joined by a growing apparel line-up. Uncle Rocco’s stocks its own Japanese selvedge denim, among other wardrobe staples. They’re usually joined by interesting one-off collaborations, including hats by Ebbets Field Flannels and Bata Bullets selvedge sneakers. And the guys at Melbourne Moonshine, who started off as clients, might be involved in something for Rocco’s soon. “Uncle Rocco’s Moonshine is in the works” says Sfameni. “I love a collaboration, everyone laughs at me and calls me co-Fab”.

The scope Uncle Rocco’s offering is ambitious, but it’s grounded by Sfameni’s simple mission statement. “Everything goes back to the history of my family, that’s what this shop is about.”