Australians in New York, Ryan Lobo and Ramon Martin of two-year-old label TOME, debuted at New York Fashion Week a couple of weeks ago and took us behind the scenes in the lead-up. Just over a year ago, we chatted with Ryan Lobo and Ramon Martin of New York based label TOME after the release of their very first collection. Two weeks ago they started 2013 with a major milestone, presenting their autumn/winter 13 collection as part of New York Fashion Week – the only Australians showing at the prestigious event. We visited the lads at their Lower East Side studio a couple of days before their presentation as they were casting and fitting models and putting the finishing touches on the collection.

When we arrived at the Chrystie Street space, the mood was quiet but determined. Models were being fitted, carefully pulling clothes on and off as Lobo, Martin and new collaborator, cult Australian stylist Michelle Jank, honed the collection, working towards bringing it together as a cohesive whole.

Waists were cinched with belts and fur collars tried with one look, rejected and found to be perfect for another, while a problematic pair of leather leggings were hastily recut. Watching Lobo and Martin work together on this final stage highlighted their working dynamic. While Lobo is a big picture guy – trying a pair of ultra-wide legged pants with various jackets and tops, working out the best combination as he goes – Martin jumps in to correct the hem of a dress or adjust the way a belt falls. This isn’t to suggest that the two have such strict roles – TOME is clearly a coming together of two minds.

Already, Martin and Lobo have had a 2013 to remember. While we were all still recovering from New Year’s celebrations, they were picking up their Ecco Domani Fashion Foundation award, putting them in the illustrious company of previous winners Alexander Wang, Rodarte and Proenza Schouler. For Lobo, winning the award, which came with a cash prize, set them on the road to New York Fashion Week. “It pushed us into our first presentation,” he says, “which was very timely. We are completely self funded and being involved in NYFW is no small financial ask, so this bridged the gap for us.” The prize has also resulted in the industry sitting up and paying attention. “The attention due to the award has been overwhelmingly great and the press and buyers are really taking notice.”

And so, money in their pocket, TOME started putting their collection together, with the added help of Jank and her skills as a creative director. “Michelle is one of our guardian angels,” says Lobo. “She got us completely into presentation mode. She has an exceptional eye for detail, meticulous planning and a great perspective on fashion – both its history and its context for TOME.”

Putting together a TOME collection is a process they have found to be much more personal than when they were working for others (Martin having designed for John Paul Gaultier and Derek Lam, Lobo buying for Belinda). “When we pick an inspirational woman for the season, she usually comes to us rather than us seeking her out,” comments Lobo, “She is articulated in clothing with complete reverence. We do not take these women lightly. We begin with a woman’s life and her output and the collection grows from this.”

For their Fashion Week debut, their woman was American painter Georgia O’Keefe. The collection, says Lobo, “ended up somewhere very motivated by her obsession with the good in American life, brought out in all the red, white and blue, and her morphing of bones, flowers and sky, which led to shades of grey and white.”

The final presentation, on the frigid first day of fashion week (the day before a blizzard took over the city), had a moody, evocative feel, with haunting music and the structured, well-considered clothes TOME are already known for. There was an emphasis on the oversized, with great grey jackets enveloping the tiny models, wide white culottes topped with a loose black coats and a fantastic silvery-bronze dress that looked a little like a sleeping bag on the hanger but was transformed with a cinch of a belt. There was a slight western feel, with a couple of models sporting wide brimmed hats, one completing a 1940s-esque look of a black mid-calf dress with a fur wrapped around like a vest. A deep raspberry gown stood out, as did a bright blue silk jacket, anchored by a thin white belt. Three astonishing white dresses were presented on a separate stage, drawing over an impressed crowd.

Lobo and Martin were clearly exhausted, admitting they “hadn’t had much sleep” since we last saw them. But they had succeeded in making a stellar debut onto the official fashion calendar, presenting a modern, mature collection that might not make them commercial stars, but will certainly win them fashion hearts. And for these two guys from Sydney, we get the feeling that’s just where they want to be.

TOME is available at Grace and online at My Chameleon and La Garconne. 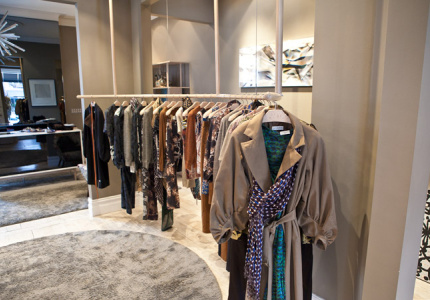