Three Decades of Trade: The Integrity and Longevity of Scanlan Theodore

The label unites old and new collaborators for the opening of its new Brighton store. The Australian retail market is tough, with sales slumping for an increasing number of labels. Lover, Roger David and Metalicus all called in the administrators recently, and while some are making triumphant comebacks, others are closing the doors on their brick-and-mortar shops in order to survive.

Scanlan Theodore has so far managed to buck that trend. The label opened on Chapel Street in 1987, combining European elegance, New York style and effortless, undeniably Australian wearability. Over more than three decades, the enduring label has carefully garnered a loyal following of unwavering fans.

Now the label has opened an outpost in Brighton (its sixth in Melbourne), spread across two storeys and featuring the same industrial elegance of its other locations – clean lines, airy spaces and hardwood accents, with blush, olive and soft blue tones offsetting hard steel highlights.

The space, by interior designer Don McQualter, falls seamlessly in line with the Scanlan aesthetic. McQualter has an intuitive understanding of the label’s DNA, having worked with it since its inception (he’s responsible for the visual aesthetic of a number of its stores here and overseas).

“The design team has been fundamentally the same since 2000,” says Scanlan creative director Gary Theodore (co-founder Fiona Scanlan sold her share the business in 2003 and now works as design consultant). “The relationship is one of creative respect and mutual aestheticism.”

“Intelligent, well-crafted design has always been part of the brand’s integrity,” says Theodore. “And creating classic pieces that stand the test of time is definitely a part of the process.”

This season, those crepe jackets come with curvy cocoon sleeves and in a double-breasted style, while cuts from past seasons, such as the elegant drape front jacket, endure. The low-rise silk pant has been elevated with statement buttons and wavy visible seams.

“It made sense to be a concept within the Scanlan Theodore store,” OnePointSevenFour owner and optician Joshua Matta says. “[We] share the same views of creative integrity.”

Matta has worked in artisan eyewear workshops in Japan and Italy, producing collections for Dover Street Market London, Carhartt and Sun Buddies. He now runs OnePointSevenFour with his wife Emma. Together, the pair retains a sharp focus on quality design and construction.

Theodore’s decision to welcome another label into the Scanlan family indicates this may be a new chapter for the brand. “Who knows what the future holds?” he says. 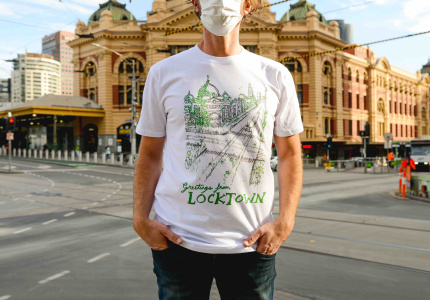