A design duo that includes a former pattern maker for Vivienne Westwood has set up shop on Smith Street. 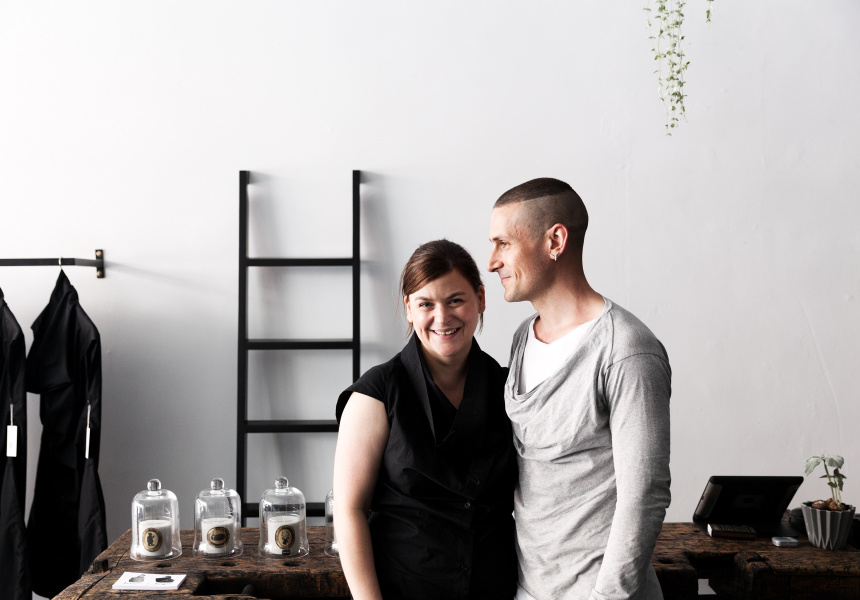 Sam and Kyleigh Fisher, the husband-and-wife team behind fashion label Tanner + Teague, have had a busy couple of years. They’ve had two kids; renovated two houses; launched two clothing lines; and about two weeks ago, opened their first bricks-and-mortar store on Smith Street.

Originally conceived as a children’s line in 2013, the pair launched its first men’s and womenswear collection this year due to popular demand; parents buying the clothes for their kids were asking for the same pieces in their own size. Until recently, the Fishers were selling their garments, which are produced locally in Brunswick and Coburg, online and at design markets.

Tanner + Teague – a combination of Sam and Kyleigh’s mothers’ maiden names – is, “Really about trying to inject some new and exploratory way of cutting garments” into an everyday, ready-to-wear context, Sam says.

These are construction skills Sam honed in the London atelier of iconic English fashion designer Vivienne Westwood, where he worked as a senior pattern maker for three years. When they returned to Australia, Kyleigh (whose background is in architectural photography) hunkered down on planning their yet-unhatched fashion line, while Sam continued to work as a pattern maker for Scanlan Theodore, then Willow, in Sydney.

Working at Westwood, “Profoundly changed the way I see fashion,” Sam says. “Not so much in terms of aesthetics, but in terms of garment construction systems.” That system of drapery – the practice of fashioning a garment on the stand rather than using a paper pattern to begin to assemble a piece of clothing – is a technique for which Westwood is renowned.

“I drape – that’s how I make patterns,” Sam says. “The fabric talks to you and you work in a much more three-dimensional way.”

The Tanner + Teague collection is contemporary and urban, with stylish and versatile pieces made from cotton, wool and other natural fibers from Australia and New Zealand. With a unisex ethos – the wonderfully simple but chic “twist” dresses are the exception – Sam and Kyleigh mostly stick to a neutral palette of black, grey and white. They want their clothes to be sustainable and practical, as well as fashion-forward.

“If it can’t go through the wash, it’s unacceptable,” Sam says.

At their new boutique, which was a bike shop in its former life, visitors can also peruse a thoughtfully curated trove of scents, accessories and homewares that Kyleigh has sourced from around the globe. There’s a collection of Mark Buxton perfumes – he’s the man behind Comme de Garçons’s iconic first fragrance, among others – handmade leather sandals from Spain, candleholders from Demark reminiscent of abstract sculpture and beard balm by Australian-born David Mallett, one of Paris’s most in-demand hair stylists.

It’s a select assemblage of foreign products, some of which you’re unlikely to find elsewhere in Melbourne.