Standing Out from the Crowd

LMFF kicked it up a notch on Monday night as Runway 4 showcased the best and brightest of Australian fashion. 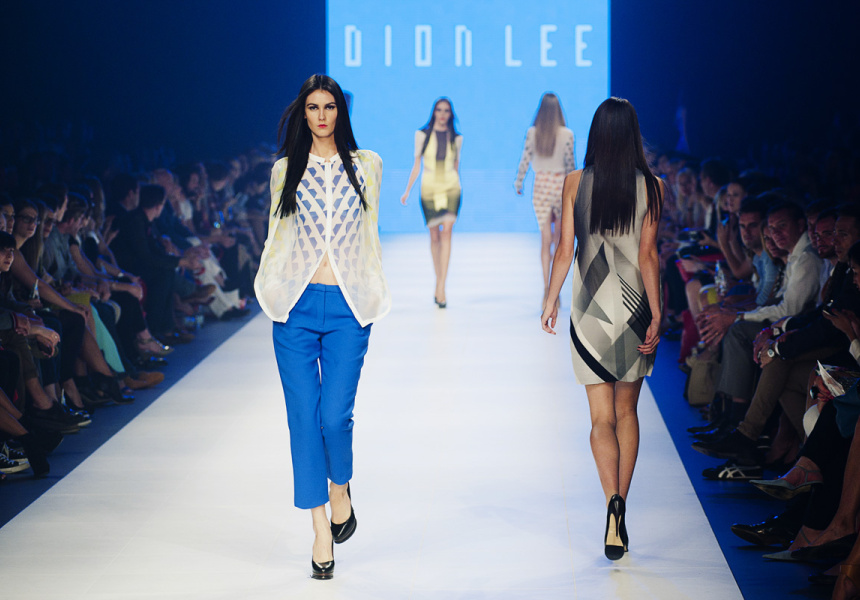 It was a rare quiet night at the Fashion Festival on Monday, with only a single show for the evening. But with sponsorship from vogue.com.au, the lone show was certainly a big one. There was a serious fashion crowd in the building, including Vogue Australia editor-in-chief Kirstie Clements sitting front row with National Designer Award winner Christopher Esber.

Dion Lee started proceedings with a stellar showing of his signature tailored aesthetic. Despite some serious shoe problems for the models (half of them ended up barefoot), Lee’s internationally-minded looks combined body-con, geometric prints and spot-on use of colour. Having just shown at London Fashion Week, Lee’s already stellar trajectory just keeps aiming higher and higher.

Gary Bigeni was next up, with a collection that saw him branching out from his signature jersey and seriously stepping up to the plate. A polka-dot print added interest to his draped pieces as well as cropped pants and shirts, but it was the half-leather, half-jersey skirt that really impressed. Josh Goot’s opening look of a rose-embossed leather skirt and top saw the crowd draw a collective breath. The suiting and moody prints that followed were a darker side to the Goot we know and love.

One of our favourites, Magdalena Velevska, sent out looks that built on her successful spring/summer breakout collection. The tribal-like chest detailing was still there, but this time there were sheer elements, lime green and a dark brocade print. The final dresses – in purple, black and teal – were particularly lust-worthy. The breezily cool designs of Kym Ellery were brought to a new level with laser cut leather, double thigh splits and red carpet-worthy gowns. Studded belts finished off the dresses in textured black and gold, while on-trend peplums were also present.

Runway 4 truly showcased the best of Australia’s fashion talent – forward, original design that is starting to make its mark on the international fashion scene.