As well as founding the influential UK street wear brand Maharishi, Hardy Blechman literally wrote the book on camouflage. In Australia for this year’s Carbon festival, Broadsheet caught up with the designer as he held forth on everything from military clothing budgets to the Wu Tang Clan. 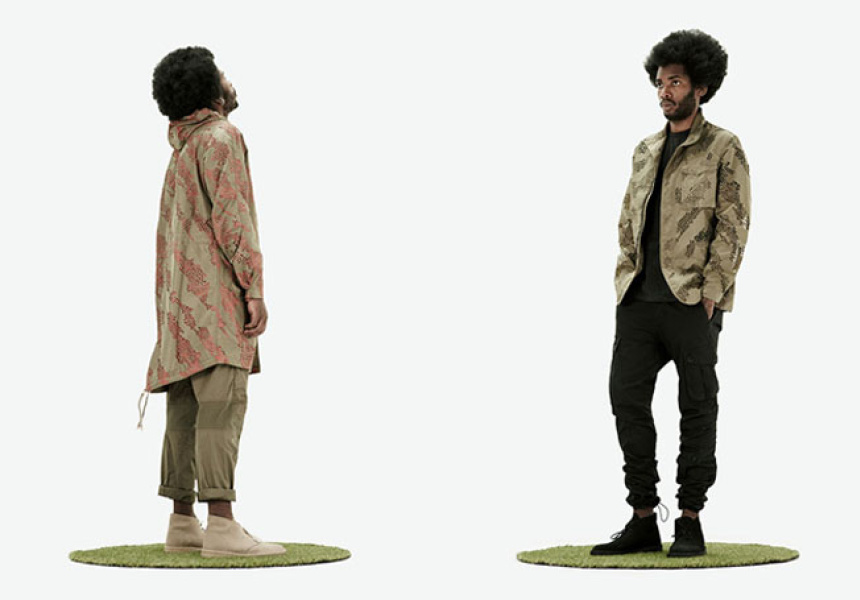 Hardy Blechman started his career in clothing design at the age of 19, working for an Indonesian maker while on a sabbatical in Thailand, developing an interest in organic fibres and hemp because of their reduced environmental impact. Unfortunately, due the hemp industry’s embryonic status, it wasn’t long before he started recycling industrial and military surplus as an equally environmentally-friendly alternative. Producing clothes using these materials was practically unheard of in the fashion world, and Maharishi, despite being predominantly camouflage, began to truly stand out.

Since then, he has garnered all sorts of critical acclaim, won fashion awards, created iconic designs, collaborated with public figures, written a tome on camouflage (including his seminal book Disruptive Pattern Material) and kept his brand both independent and true to its environmentally conscious roots.

Matt Derody: Nice to meet you, Hardy. So I suppose you get asked this all the time, but why camouflage?

Hardy Blechman: I guess I’ve always had a love for it, but it was organic. I started Maharishi (the Sanskrit word for “great vision”) because I have a love of hemp and organic fibres. I did that for a couple of seasons, but the state of the hemp industry at that time was quite embryonic and it was hard to put together a full collection. In order to expand my collection and maintain the same environmental concerns, I started to recycle industrial surplus, and then military surplus. I investigated lots of uniforms and what was available, and I became aware of the huge variation in pattern design from country to country, and within each county … generations and generations of patterns. I became fascinated with it, started to collect it and became obsessed with it, and started research to publish a book on the subject, Disruptive Pattern Material. I began to question more and more why I was so drawn to it and why so many other people were. And that is practically how I jumped into the camouflage whirlpool.

MD:What do you think the attraction is for the rest of us?

HB: I think, fundamentally, we are all attracted to the colour green because it’s in the middle of the spectrum and it’s easy on the eyes. It’s a relaxing colour to look at. At the red end of the spectrum it’s all a bit provocative and invokes emotion and shock, especially when you couple colours like red with black and white. And green is the opposite of that. When you combine it with the other colours that are typical of camouflage (well not the colour of the Australian camouflage, but the typical woodland camouflage), black and brown and sand and a lot of green, I think that combination represents nature. On a subconscious level, people are attracted to that because it’s just life. I’ve never been that attracted to fashion that is simply theatrical or thematic or doesn’t function well so I’ve always been very attracted to functional clothing. I researched military clothing from the perspective of wanting to use it, and became aware of how good it is as functional clothing. The military has some serious budgets; far greater than any fashion brand. I think even Nike would be dwarfed by the research and development that the US military put into clothing development. So much of the clothing we wear has come from the military. It’s largely forgotten, but the tie, the T-shirt, the cardigan, the trench coat, as well as more obvious references like cargo or combat pants all come from the military. They’ve used my tax dollars (and our tax dollars) to invest in these developments so I feel an ownership over them. I’m quite happy to use that as a starting point for design.

MD: But then you run the risk of being seen as pro-military.

HB: Within Maharishi you won’t really find anything like a uniform. A lot of pieces use contemporary or vintage uniforms as a start point for design and I enjoy that. I became aware, over the last few years, that people who aren’t familiar with Maharishi might look at the frequent use of green, or the camouflage patterns and military styling and believe that I was celebrating war or supporting it in some way. I wanted to make it clear that I wasn’t, so I started using the “pacifist military design” strapline a few years ago just to make it super clear. And I think it kind of worked.

MD: I understand that Maharishi is very popular in hip-hop circles and with the Wu Tang Clan in particular.

HB: There’s certainly an aggression within hip-hop that I don’t really support, and I’m not really coming from that angle. There’s a chance that some people in hip-hop wear military clothing to take an aggressive stance, but I don’t speak to that. I’ve never discussed it directly with anyone in the Wu Tang Clan, but I’d be really surprised if RZA, who’s had the run of that show, supported the military machine. I doubt it. He’s a wise man and a pacifist, although I can’t speak for him.

MD: How did you get involved with the Clan?

HB: I have an unusual history with the Wu: 20 years ago, when I was first starting, using corporate logos was quite popular in fashion. I took a Wu Tang logo and turned it upside down to make it an ‘M’ instead of a ‘W’. I attracted a little flack for that from inside the Wu Tang Clan. Years later, Maharishi became more popular, we were approached by people from the Wu. They came to England and wanted some clothes and, eventually, I was delighted to make clothes for RZA. It was probably one of the high points of my career when he asked me to design a jacket and I was finally able to officially put a Wu ‘W’ and a Maharishi ‘M’ on the front of a jacket with RZAs signature on it. I think most people in hip-hop probably adopt military clothing as a kind of “fuck you”. I think clothing is used to be anti-establishment, I think it’s probably more about that than anything. But for a lot of other people clothes are just fashion. I don’t blame people for not really thinking about why they wear certain items of clothing, they just do. People wear what they want to wear. I don’t think I would have thought about it all that much but when you take on the task of publishing a book on the topic, suddenly you have to be informed, but I doubt the average person really gives a shit: it’s just what they want to wear, which is fine.

MD: You’re speaking at Carbon about building a brand. What do you think the most important aspect is?

HB: Most important is just starting the mission: getting involved, believing in it and never giving up … just pursuing your goals and your dreams. It’s a lot of hard work, perseverance and persistence. It’s something that Goethe said: Until you commit to something you have no chance, and once you do commit to something all manner of unseen forces will come into play to influence your mission. Unless you commit and actually start something there isn’t any chance for luck or unseen forces to align themselves with you.

Hardy Blechman is speaking as part of the Carbon Festival at RMIT’s Storey Hall this weekend. Tickets available at weareallcarbon.com.