When Rapha started selling cycling clothes influenced by the tough yet romantic era of the 50s and 60s, there was nothing like it on the market. Just over a decade later, it has the cycling world at its feet. 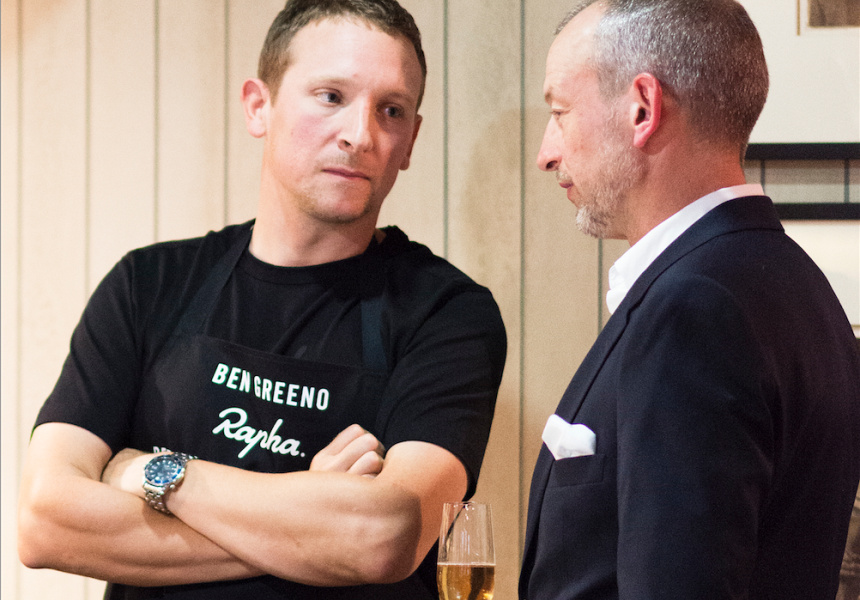 Never underestimate the power of knowing exactly what you’re doing.

Or being passionate about it. Being obsessive helps, too. And perhaps most importantly, knowing why you do it.

Get those things together and you just might have something.

Knowing why is what Simon Mottram, CEO of Rapha, specializes in, but fastidiously designed and made cycle wear is what he’s famous for.

Off the back of a dinner at the Rapha Cycling Club in Sydney cooked by Momofuku chef Ben Greeno, we’re now sitting down for lunch at Melbourne’s Supernormal. Sitting across the table in white, crepe soled brogues and a natty ‘Sky’ blue rain jacket (a sample from next season) Mottram mixes fashion and sport with casual aplomb, as he did food and cycling the week before. He has a cyclist’s lean physique (though anything less would be disappointing) and he’s quietly spoken and quietly confident.

“It was really interesting. It’s the sort of event Rapha should do,” says Mottram, of the dinner. “Things that nobody else thinks of doing. Not just geeky cyclists talking about geeky cycling. It’s saying, ‘Cycling is important and has such reach, you should be more ambitious about it. Put it in the middle of culture and let culture sit next to it.’ So having Ben Greeno doing the food, which was amazing, and in that environment, it just felt really natural.”

As far as Mottram and the brand are concerned, situations like this are the places to be. “I love putting cycling in there,” he continues. “I love putting it in the title you write for, that’s where it should be. It shouldn’t just be in some glossy magazine.”

“Our marketing strategy is about selling cycling. Not a jersey or a pair of knicks, (but) communicating how amazing the sport is.”

It’s hard not to notice cycling, especially on the streets of Melbourne. What Simon Mottram saw 11 years ago as he embarked on his Rapha journey, was an untapped market. Cycling is a sport participated in by affluent professionals. More than their earning power, they’re people who love how cycling makes them feel, as well as where it takes them. What was on the market at the time didn’t represent them. Then along came Rapha, modelling its clothes on the romantic, glory days of cycling and the tough-guy heroes of the sport like Anquetil, Bobet, Coppi and Merckx.

Cycling clothes at the time “looked like they came out of an exploded paint factory.” All of sudden, Rapha’s simple black kits with white armbands became de rigueur, and the gaudy excessiveness of the nineties was forgotten.

Fast forward to 2015, and cycling’s accepted design language is one essentially created by Mottram and his brand.

“The first rule of marketing is: be first.” Mottram states this with the assuredness of someone who did just that. Rapha took off like the company had invented the iPod, and since then has attracted the same levels of divisive fandom as Apple.

“Some people won’t agree with you, some people won’t like it. Maybe they want some regular products and don’t care for brands being so highfalutin. Which we are,” he tacks on, with a laugh.

The thing about Rapha, or any sport-associated brand, is that what they’re pitching isn’t purely fashion. Rapha has built an inspiring world of stories and film, connections and associations that are purely designed to get you on a bike. They want you to be out there, to be healthy. You’re going to need a jersey for that, but you’re going to want a Rapha jersey.

“The things it gives you, the sense of adventure, the culture, the camaraderie. It’s all about the sport. The culture is the key.”

“I think lots of people come into cycling with the fitness angle and if they don’t learn or get the culture, then they’ll probably just do it for a few years,” Mottram continues. “Our job is to say ‘look, this is what it’s all about’.”

Another crucial element of the brand is the charities, events and initiatives. Where many companies would pick one and that would be their whole marketing campaign, Rapha is involved in several at any one time. Mottram says it comes from “Total obsession – we do quite a lot of things and I encourage us to take on more and more challenges.”

After we meet, Mottram hosted an event for Rapha’s latest involvement with a charity: Thrivor.

When Melbourne local Justin McClean was diagnosed with bowel cancer, he made a promise to himself: if he made it through he would ride in Corsica. Along with a friend, he booked the trip through Rapha Travel while still undergoing chemotherapy. But going through the patient experience first hand and realizing the reach of cycling, McLean wanted to do more.

“The experience for the sufferer is pretty much awful and so, rather than just trying to raise some money to fund research or find cures, [Thrivor] is address[ing] the whole experience, of being a cancer sufferer from start to the finish. The inefficiencies, putting the patient at the beginning and creating an experience model for the patient and to create a new global standard,” Mottram says.

“From the moment you are diagnosed to the moment you’re given the all clear, you’re disempowered. It’s totally unclear what you’re supposed to do next, you’re treated pretty much like a pawn,” he explains.

So McClean established Thrivor, and as part of their involvement, Rapha produced an extraordinary film that is both a story of human determination and will, and an inadvertent advertisement for the rustic beauty of Corsica.

“It’s some pretty tough stuff,” say Mottram, “it’s quite full on, as it should be. We made him a pair of bib shorts with two pads in it – he was in such a bad way - but he did 780 km over mountains. He kissed the tarmac on the top of each climb. Those trips are always very rewarding, but this was something else.”

At the launch of the film, McClean explained the deliberate spelling of the title of his charity. “Everyone, doctors and nurses and everyone around me would tell me to be a survivor, but I didn’t want to be a survivor, I wanted to thrive. So we spelt it like that.”

Mottram talks of giving his brand meaning, but perhaps more than anything else it’s the involvement in projects like this, and there are many, that deliver on that promise. This is the hanging of the hat.

“We definitely set out to stand for something,” Mottram says. “But I was always really happy that some wouldn’t get it or understand it, because the great brands don’t make you sit on the fence.”

Rapha is far from exclusive. The website is full of films and stories and blogs about bike builders and projects such as Rapha Travel. The brand is an experience, and Mottram wants you to have it. The idea is to be part of the history, of the moment and the future.

The Rapha Cycling Club has an outpost in Melbourne, with Mottram assuring that a bricks and mortar location isn’t far away. In fact the not too distant future promises many more ‘Cycling Clubs’, but in the meantime the club has a weekly ride. On joining you can do the local loops, or have a bike waiting for you wherever there’s a club in the world.

“When we started, we put on an event in London and in the corner were a few Rapha products and a couple of samples. That was it. We had this gallery and said “Here’s the sport of road cycling. “It’s really brilliant, we’re part of this, come on and join us.”

As ever, Mottram is never off message.