The Scent of a Gentleman

An elegant skincare range made in Australia, for the modern Australian gent. “There are a lot of products out there, but there wasn’t any product that was simple and straightforward,” says Woodward, “they all seemed over-marketed, claiming all this stuff, and I think guys just aren’t that interested in all of that,” he says.

Sally, a natural perfumer by trade, blends formulas sourced from Australia’s rich landscape that are uncomplicated and free from synthetics and parabens. Some of her current favourites are Australian bush extract of Kakadu Plum, organic extracts of lavender, witch hazel, chamomile, rose hip and calendula. Woodward, who has overseen the design of their simple black and white bottles, believes packaging cannot be underestimated in an over cluttered consumerist market.

“When I’m looking for a body wash I want to see a really considered design and output,” he says.

Two weeks after launching in December 2012, they were contacted by designer department store Colette in Paris, who are now one of their major stockists. They can also be found in New York, Germany, the Netherlands and independent Australian stores like Koskela in Sydney and Dakota 501 in Melbourne.

“A lot of Aussie brands aren’t proud of being made in Australia,” says Woodward, “but we appreciate the marketing ability of 100 per cent Aussie in the overseas market,” he says.

Creating a culture around the brand has been as important as the product, and the theme of the aspiring, thoughtful gentleman resonates through their entire brand and positioning. Upcoming collaborations will include a series of interviews with Australian men. “Whether they be carpenters, musicians or writers, each have their own gentlemanly story, path and journey,” says Woodward. 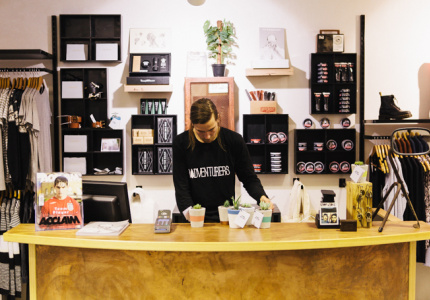