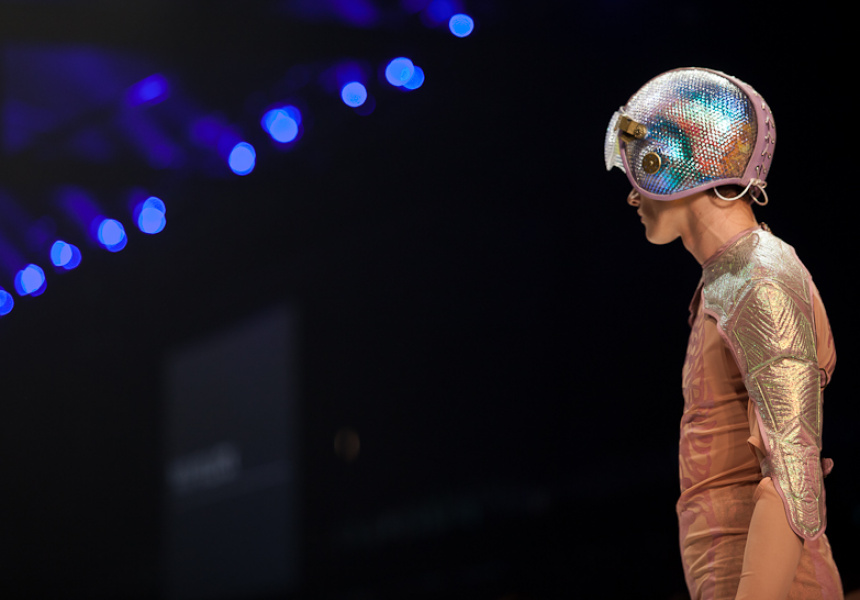 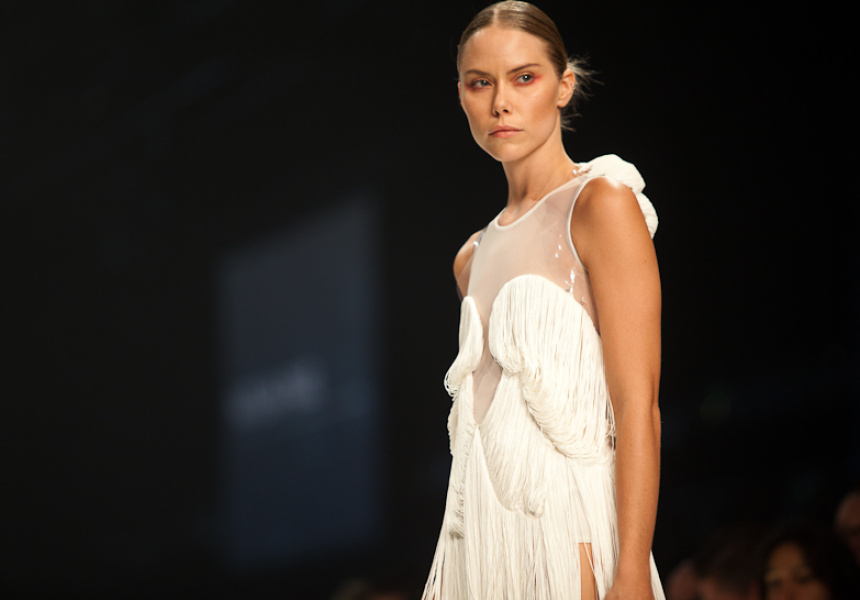 Collections were edited with a view to wearability and styled with accessories by Sportsgirl as an eclectic crowd (which included English fashion designer Henry Holland) sat at the runway edge for Saturday night’s National Graduate Show. The music created an electrifying atmosphere to kick off proceedings.

First up was Nixi Killick’s collection, which seemed like a psychedelic version of She-Ra in her graduate editorial. Considerably toned down for the runway, a pared-back version of her galactic princesses remained in the form of lilac corsetry and an opalescent powder blue maxi dress, with men’s offerings of metallic hooded bombers and space-faring digital prints.

Courtney Holm’s menswear range was informed by the role of prosthetics in augmenting the human body. Hand-generated and digital prints on jackets and pants formed the basis of a sporty collection with an industrial vibe.

Monique White’s collection was built on an ethos of sustainable fashion, translating to pieces of modern, uncluttered simplicity. Fabric selection was key; linen/cotton canvas, cotton twill and silk cotton were all utilised with the Australian climate in mind. A favourite was the playful grey and yellow polka dot suit.

Kara Liu’s collection was firmly planted in the year 2012, comprising minimal dresses, wide legged pants and belted trenches in a palette of cobalt blue and monochromes.

Jack Hancock sent out an army of ancient Samurais who had time-travelled to Edwardian England. Austere jackets merged with Hakama pants in grey, black and white. Hancock also deconstructed traditional elements such as pockets and lining to create new design configurations.

Kathleen Choo’s sartorial sculptures featured abstract silhouettes with lots of draping, folding and laser-cut embellishments. At their most heightened, dresses gave the impression of moving through a landscape where shapes rise up like strange formations on a fossil mountain, untouched by colour.

Cesar Chehade responded to the idea of a future where humans have adapted to live underwater. Silhouettes resembled stingrays and octopuses, their glistening skins created using laser-cut silicon in purple, blue and green. A navy blue gown swayed down the runway, capturing the movement of seaweed in the ocean.

This was a vibrant show that reflected the inventive and thought-provoking zeitgeist of Australian fashion’s next generation.