For Pleasure and for Purpose

Aesop’s Pleasure and Purpose display in Myer's Bourke Street windows offers a refreshingly playful outlook on beauty and the science of olfaction. 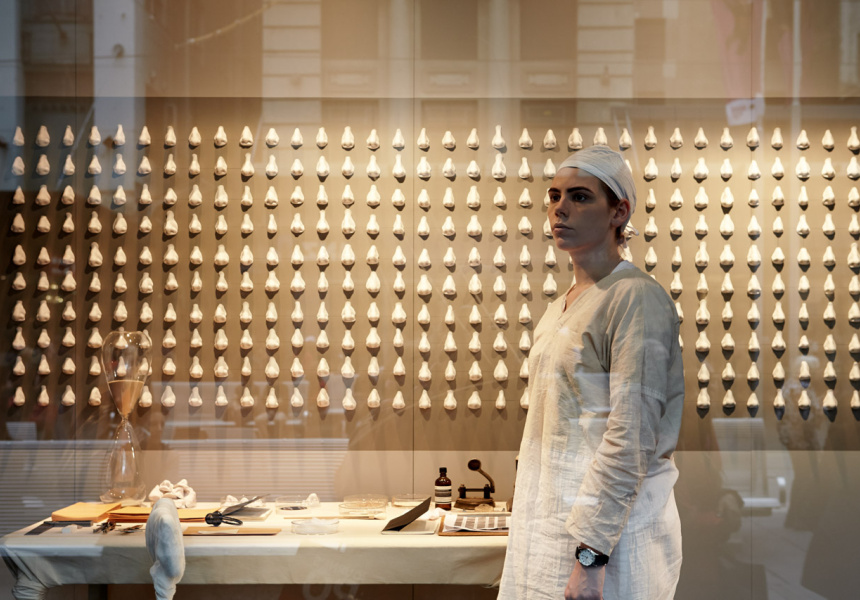 “The nose is rarely associated with beauty,” says Aesop’s visual merchandising manager, Carolyn Jackson, of the beauty brand’s latest and most unusual campaign, Pleasure and Purpose. “People are really self conscious about their noses, they don’t love or respect them as they should.”

Spanning Myer’s Bourke Street windows, Aesop presents a seven-part installation exploring the nose and the olfactory sense. Merging performance elements with sculptural art and an exhibitionist approach to visual merchandising, Aesop has engineered an elaborate nose laboratory with a series of eccentric narratives and characters.

Embracing Aesop’s classic creative tone, Jackson, a former exhibition designer at The Gallery of Modern Art in Brisbane has employed the nose as the symbolic feature for the campaign, a feature she hopes to reproduce in abundance over the next two weeks.

“The campaign itself is about building an exhibition of noses (a Nasothèque) from start to finish. We want to go beyond just a two-or-three-dimensional approach by engaging the community and adding a strong performative element.”

The window installation is made up of: a casting lab where passersby are invited to offer their noses for casting, a production lab where each casting is filled with plaster, a curing lab where the noses rest over night to harden, an analysis lab where each nose is thoroughly inspected and refined accordingly and lastly, the Nasothèque; a luminous and expanding trophy wall of individually hand-cast plaster noses. In the final minute of the last day of the Pleasure and Purpose exhibition, the 1200th plaster nose will be ceremoniously placed onto the wall signifying the completion of the Nasothèque. From here, the collection will remain static for one day only before departing Bourke Street for Hong Kong.

“We know that this is ridiculous,” Jackson laughs. “When a nose is cast, there’s this really beautiful moment where the participant gets to hold the casting up, it’s really very humorous.”

Behind the glass a uniformed troupe of ‘scientists’ perform each laboratory procedure throughout the day, assuming a minimalist and sober disposition punctuated with playful mad scientist references. The “performance space”, as Jackson refers to it, remains appropriately unembellished by window dressings.

“We started with a tone, an aesthetic and a stylistic palate of materials that we wanted to work with, so every decision we made was very informed by that process,” Jackson explains.

“We have never dressed windows at Aesop, we have always endeavored to create sets. Almost everything that is chosen within these windows is functional aside from some subtle decorations and textures that have been applied in a very restrained manner.”

With curious audiences already gathered at the Myer windows during the first days of the exhibition, Jackson takes a moment to step back from the crowd and observe their faces.

Six noses, infused with Aesop’s signature essential oils, sit on the exterior of the glass window and audiences are encouraged to touch and smell them. It is quite a strange experience to pinch a nose not attached to a face – the nose of a stranger, albeit a plaster one.

“When you extract a nose from a face you can actually tell a lot about a person; cultural background and quite often gender. However when you actually view the noses on mass, you see a lot of similarities within the differences. We are celebrating the similarity of all noses and noses themselves,” Jackson explains.

To enquire about having your nose cast, visit any Aesop retail counter.

The Pleasure and Purpose Exhibition runs at the Myer windows on Bourke Street until Wednesday April 23.