Indifferent to the caprice of fashion, Pickings and Parry’s honest, heritage workwear and old-fashioned manufacture is keeping the lights on for a vanishing industry. You can almost smell the grease. 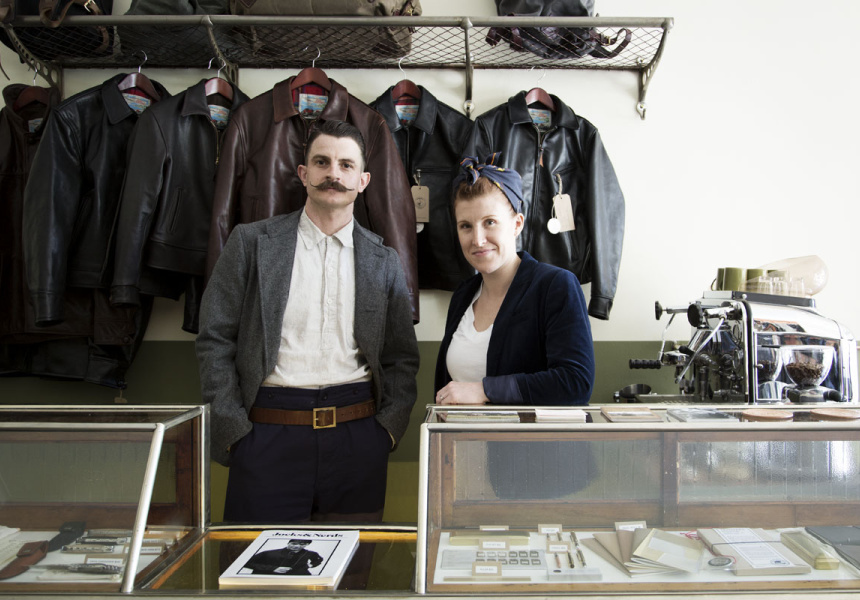 The trend of heritage, turn-of-the-century workwear in Melbourne isn’t uncommon, and certainly not new. We’ve been fooling around with it for a while now, but it’s important to distinguish between the trend – which can feel a bit like playing dress-ups – and those who look at it a little like preservation, keeping the lights on for a vanishing industry.

Pickings and Parry is firmly in the latter camp. Chris Pickings and his fiancé Carlan’s new Gertrude Street store see it as a way of “encouraging a more sensible buying culture and a way of bringing a touch of tradition to Melbourne,” as Chris explains. It is an all-encompassing passion that is driven by the search for authentic products and manufacture that is all but lost, except for a handful of stalwarts in towns scattered across the UK, Europe and the US. It attracts fanatics like a magnet and leads you into a world of heavy denim, pre-supers wool and leather that’s going to age as you do; with grace hopefully.

What you’ll find in the deftly renovated store are early 20th century fittings, brass conduit and light switches that Pickings agonised over. In the back is a two-seat barbershop that will trim that moustache, beard or mop into an era-defining style.

You’ll discover hard-to-find workwear pieces from Hold Fast, fastidiously constructed jackets and trousers from Collective Noun, German brand Pikes Denim and authentic army t-shirts and under garments from Merz Schwanen. There are beautiful knives from Laguiole En Aubrac, stationery from Midori, Japan, and you’re sure to linger over the vintage motorcycle in the window. There’s more to come and some very exclusive products up to this point unavailable in Australia.

A Newcastle, Great Britain native, Chris talks quickly with a thick accent that’s personable and warm, and wears a tattoo on his forearm that says ‘Slow Down’, telling him he’s speaking too fast or perhaps this should be his last drink whenever he raises a glass. Both work.

An engineer by trade, when Pickings’ father died, he inherited guitars, records and vintage clothes. His father and father before him were butchers and mother’s side miners and railway men. The store’s tagline ‘Style for the Working Man’ seems more appropriate once you know this.

“My sister and I still keep the family butchers shop going, so I guess the shop keeping path was inevitable – it’s in the blood.”