With a new showroom in New York and a spot in the final of the International Woolmark Prize, the tailor’s star continues to rise. We catch up with him at his new Soho digs. “There is no Australian tailoring,” says Patrick Johnson in late July, sitting in a sunny, second-storey showroom in New York’s Soho neighbourhood. This luxurious white-walled space is P.Johnson Tailor’s newest outpost, and the company’s first overseas.

Johnson is right. Australia doesn’t have a historical tailoring legacy in the vein of Savile Row or Italy. But the success of Johnson’s menswear enterprise shows Australians have been waiting for someone to take up the mantel. Since 2008 P.Johnson has grown to 32 employees, with four showrooms in three cities, with plans for another Sydney location this year. He’s also a co-owner of Suit Shop, which offers customers a pared-back, made-to-measure suit service for less than $1000.

A P.Johnson suit takes some of its cues from the Italian school – they’re soft, supple and lightweight – but it’s created with a uniquely Australian vernacular. His suits evoke romance and lightness, inspired by and responding to the local Australian environment and lifestyle.

The P.Johnson look is about purity and a bit of restraint. It’s a minimal but luxurious aesthetic that’s won the brand a legion of fans at home, while a series of successful trunk shows in London, Singapore and America showed Johnson that his brand of contemporary, understated elegance translates overseas.

Johnson grew up on a sheep farm in South Australia and studied winemaking at university in Adelaide. It turned out he was allergic to a preservative used often in the winemaking process, and he subsequently enrolled in a fashion course at Central Saint Martins College in London. He worked in the UK for several years with tailor Robert Emmett before returning to Australia to launch his own business.

If you happen to see Johnson in a T-shirt, it’s because he’s coming from or going to a yoga class – he’s staunchly loyal to shirts and polos, and is always immaculately dressed. He still measures clients when he can, but these days his role is more strategic. He meditates twice a day and says the biggest lessons he’s learned so far have been about patience and allowing something to take its course.

The time is right for an Australian menswear brand, “To push itself internationally and really stake its claim,” he says of his move to New York. But he’s not under any illusions about the challenges involved.

“You can’t just come over here and think, ‘Oh, we’ve done this in Australia pretty well, let’s just give it a go in America’. The stakes are higher here – it’s more expensive and you can’t be so arrogant as to think you’re going to get it to work.”

Knowing he needed someone with experience in the US market, Johnson partnered with Australian expat and retail consultant Ed Bertouch to run the American business. Bertouch had his own fashion label in Australia before moving to the US in 2011.

Johnson, 34, has never used traditional advertising, and for that reason, each showroom is an indispensible tool in translating the brand’s ethos and style. He uses no word more frequently than “value” when he’s talking business, and he sees his mission as helping clients, “get the essentials right”. He keeps stock as limited as possible to avoid selling something to someone because there is a lot of it, rather than because they genuinely need it.

He adds only to his menswear offering if he feels he can offer the best quality at the best price for a specific product. So while swimwear and knitwear now accompany an assortment of luxe suits, shirts and ties, you’ll never see a cotton T-shirt in his showrooms. He’s currently looking at adding custom-made outerwear to his repertoire, and has been in long-term discussions with manufacturers to create a footwear range.

“I don’t have any views for global domination. That makes me feel very anxious,” Johnson says. “I know what I want in the end and what I strive for – I want to be able to better the possibilities for dressing all men.”

He won’t live in New York forever, he says, but he’s here for a year or two at least. His monthly trips to Italy – to visit his workshop and fabric mills – are much easier from here. And in January he’ll travel to Florence for the menswear final of the International Woolmark Prize, where he is in the running to win AUD$100,000 in prize-money. (In July he won the Australian regional competition with a Merino collection inspired by the Sydney Opera House).

He is confident that P.Johnson has something unique to offer not only the men of America, but one day, England and beyond.

“That’s really where we look for the grand vision,” he says. But he’s in no rush.

“I’m a believer in the Winston Churchill school of procrastination. It allows you to make the most-informed decision at the right time. You have more information if you put it off as long as you can.” 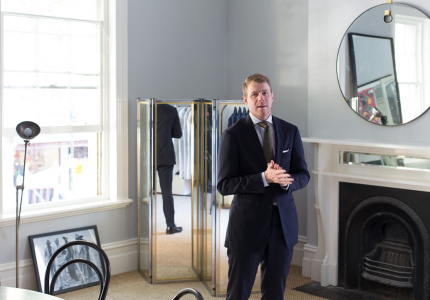