Since opening on Smith Street in 2009, the clothing store and fashion school has supported young people from new migrant and refugee communities. At its sunny new shop, find colourful threads and homewares (such as ceramic tableware and handwoven baskets) by Black and Indigenous creatives. 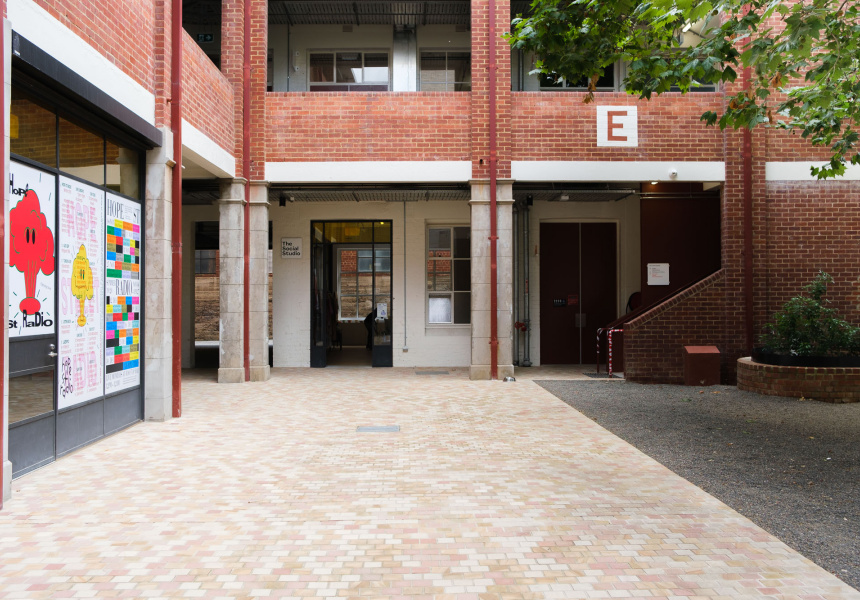 “All of the work that we do feeds back into the school and supporting the students there,” CEO Dewi Cooke tells Broadsheet. Over the past decade, The Social Studio has given hundreds of young people practical experience through its free training programs in clothing production, as well as mentoring and traineeships.

But after 12 years, the team has upsized – it moved into a bigger and brighter space in new multi-level arts hub Collingwood Yards in December. The 6500-square-metre development, which is bordered by Johnston, Wellington and Perry streets, has been transformed from a long-vacant school building into a creative hub. Other tenants include contemporary galleries West Space and Bus Projects; boutique publisher Uro; Bad Apples, the record label founded by Indigenous rapper Briggs; PBS FM; and the state’s peak body for contemporary music, Music Victoria.

“If we hadn’t had [this] opportunity … it would be very hard to know how we would continue to offer training in the way we had been, because it was such a small space,” Cooke explains. “And how we could have done that in a Covid-safe way would have been a real challenge.”

The new space is a collaborative effort from creatives within The Social Studio’s orbit. David Goss from Collingwood architecture firm Studio Goss provided pro bono advice on the design. “It’s a real graduation from the Smith Street [store], which had its own charm. It was something that was put together with a great deal of love and it was running on the smell of an oily rag,” Cooke says. The shop is flooded with natural light and has bright-yellow accents splashed throughout – including on the statement curved counter.

There’s a newly launched e-commerce site too, which is designed to be a hub for Black, Indigenous and culturally diverse creatives, just like this store. Some of the labels include Bananalands, a venture by Quandamooka man Nathan Leitch; Gammin Threads, which produces t-shirts and jumpers that promote Blak and female empowerment; and Melbourne-based clothing label Remuse, founded by New York-born designer and stylist Tamara Leacock. The Social Studio’s own label, which is made from upcycled fabrics (often dead stock from major fashion retailers), can also be purchased in-store.

Besides clothing, you’ll also find homewares: there are beautiful handwoven baskets made from washed-up fishing nets by Numbulwar Numburindi Arts, and colorful tableware by Elnaz Ceramics.

But The Social Studio aims to be more than just a transactional place. “If [makers of the labels stocked in-store] need to host an event, we could turn it into a space for them quite quickly,” Cooke says. “We’re encouraging them to think about our shop as an extension of their business. We want to make it a place where, as a consumer, you come in and you learn something about some of the retailers.”