We chat with local denim label Neuw about their latest collection, Goldmine, which was inspired by a pair of 1890s miner’s jeans. 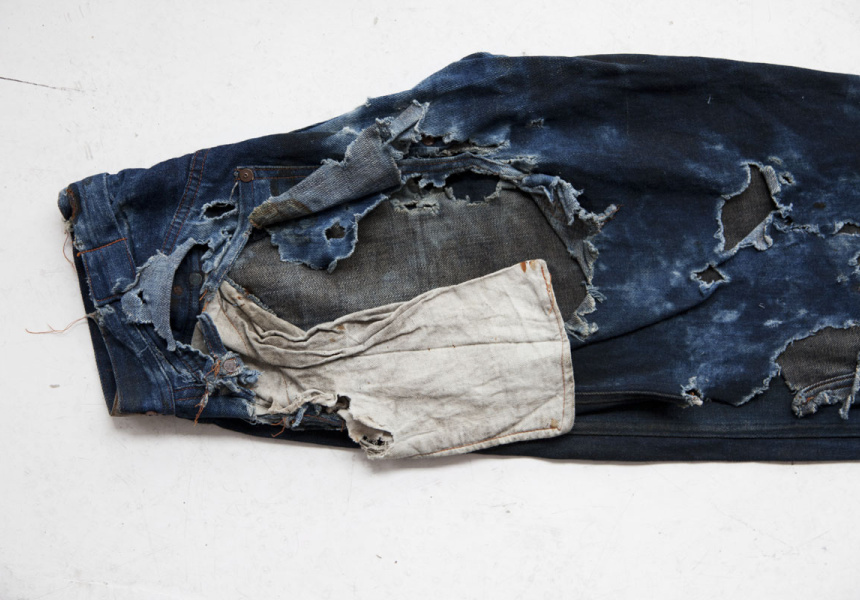 When I meet Richard Bell and Par Lundqvist (pronounced ‘pair’) – two-thirds of the team behind denim label Neuw – at their Fitzroy SERVICE store, the first thing Lundqvist notices is the jeans I’m wearing. By sight, he can tell the brand, the type of fabric and the year they were made (they are 1980s Lee jeans for those who are curious). This attention to detail and respect for denim history has come to define the four-year-old brand and is key to their latest range, Goldmine, which takes denim back to its durable, workaday roots.

“When we started the range there was so much on the news and everywhere about the Global Financial Crisis,” says marketing director Bell. “So we wanted to create something that was a bit more about positivity and resourcefulness.”

Lundqvist, who has a personal collection of over 3500 pairs of jeans, looked to the oldest (and most expensive) pair in his archive for inspiration – a pair of miner’s jeans from 1895. Purchased via eBay, the jeans were designed by a Los Angles brand called Stronghold and were discovered in a Nevada goldmine in 2007. They’d been lying under the earth since 1907, after the mine was closed as a result of flooding.

The era, a time when people didn’t have much money and often only owned one pair of jeans, spoke to the designer. Back then, jeans were designed to last, which is one of Neuw’s core values. “Because they’ve been lying in a mine, where there is a lot of salt and minerals that break down the fabric, they’ve been eroded in parts,” says Lundqvist. “You can see where the salt has been touching certain points. If you look at some of the rivets they are really pristine while others have rusted.” The jeans are layered with colour – browns and greys from dirt, bleach from the salt and warm reddish tones from the rust, all of which inspired the colour palette for the 14-piece range.

Other utilitarian pieces – a canvas vest and jacket and a pair of jeans from the 1920s, 30s and 40s – also served as reference points. “The collection is basically all about two fabrics,” says Lundqvist. “Two of the most hardwearing fabrics: denim and canvas.” They took the archive pieces to two of their favourite mills in Turkey and Japan and asked them to reproduce the durable fabrics to the same standard. “The utilitarian-type pant is such a good evolution from what was the really dandy chino look, which for us, was a bit soft,” says Bell.

Bell says they are able to maintain their level of quality because they keep other costs low. “The beauty about having an independent business is that we can put all the value in to the product,” he says. “We run everything really lean – you couldn’t run it any leaner than we already are. We have got massive global business, we’ve got retail and online presence, multiple stores, we’ve done three pop-ups – we’re everywhere – and we basically run on a team of less than 10 people. We want to make sure we can continue to do things that should cost $300 that we can do at $150.”

There is one expense they are willing to accommodate – Handsome Steve, of Abbotsford Convent fame, will be manning a bar out the back of their Brunswick Street store, which will be open once the liquor license comes through in the next couple of weeks. They want the space to be a place where they can get to know their customers, where people can have a beer, listen to music or see an exhibition.

In the meantime, Lundqvist will search for two pairs of jeans that continue to elude his ever-growing collection. “I have a few memories that have shaped my interest in denim,” he says, “and one was watching Rebel Without a Cause with James Dean when I was 10. I’d love to get my hands on the exact pair he was wearing in that movie. They came up for auction a few years ago but I got outbid by a guy called Chad McQueen who is the son of Steve McQueen – so he had a little bit more money than I did. I’d also really like to have the jeans Lou Reed was wearing when he was recording the [self-titled] Velvet Underground [record]. I don’t even know if they still exist yet. I’ve been trying to write Lou Reed emails but I don’t think he is interested.”