On the eve of LIFEwithBIRD’s 10th anniversary show at the Sydney Opera House, we sat down the designers to talk about the evolution of their sartorial success story. 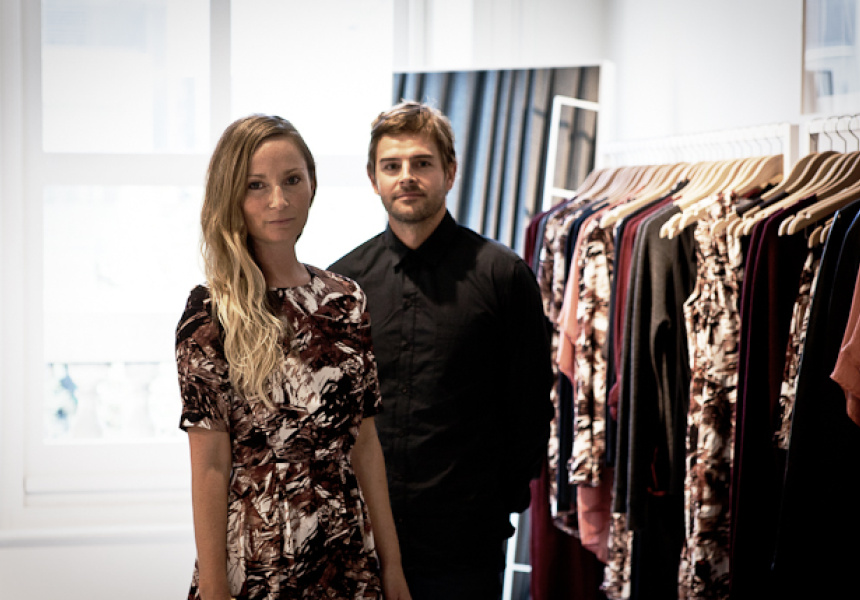 For the last 10 years, LIFEwithBIRD has distinguished itself from its Australian counterparts with its conceptual, softly tailored designs and knack for structural perfection.

The label began when Bridget (or Bird, as she is known) McCall and Nicholas Van Messner met while he was in his final year of fashion design at RMIT and she was working as a photographer and stylist. Within a matter of months, LIFEwithBIRD was born, the result of a coming together of visions. 10 years (and a wedding) later, their label has become one of the country’s most successful.

“The beauty of function and form is foremost and has always been so,” McCall says of the label’s aesthetic. “It’s minimal and clean in design and silhouette.” It is McCall’s innate sense of colour that often establishes the mood of the designs while Van Messner’s technical mastery dictates the more structural elements.

Their first collection consisted of handmade leather goods made from imported Italian leather, at a time when no one else in Melbourne was creating that sort of hand-made artisan product. “We found a real niche, a gap in the market where we could do something really interesting and get noticed quickly,” McCall says. They soon found their designs being stocked in many of Australia’s top retailers.

While that collection was founded on a shrewd business move as much as it was fuelled by creative fire, idealism has played no small part in the designers’ success. “Somewhat naively we packed up our suitcases full of our first collection and went to the UK, LA, and New York, where we picked up 10-15 stockists internationally. And we never looked back,” Van Messner says.

It was only with LIFEwithBIRD’s third collection that they brought in clothing, which aided considerably in the brand’s momentum.

Up until then, the pair were plagued by the usual hardships experienced by many fashion designers early in their careers. They worked multiple jobs trying to fund the label and their modus operandi was rudimentary. “We were pattern making off my parents’ kitchen bench,” says McCall of those formative years. They quickly learned how to command all aspects of the business and, in an industry where finding the right balance between creativity and commerce is paramount, these skills have been integral to the label’s success.

“You have to find the balance between design and business,” Van Messner says. “As much as I’d love to say all we are is designers, we struggle to get time to design. Running the business is key.”

Finding their feet has involved a learning curve marked by many years of trial and error. Van Messner cites the instance of their first solo show, which took place at Australian Fashion Week in 2005. “We found out it took 10 people 3 weeks to make a jumper,” he laughs. “We did these black sequined jumpers that were amazing but ridiculously expensive.” It was at this point that the duo refocused on creating products they valued that also translated commercially.

There was a 2-year period in which they took certain elements of production offshore to Bali. “Our aesthetic is about quality and material and finish. Bali is very much known for individual detail whereas we’re about precision and we want everything to have a tight, controlled finish,” Van Messner says. After this ill-fated experience, they resolved to manufacture locally where possible.

The label is known for placing continual emphasis on high quality, which is reflected in their diverse choice of manufacturers. Footwear is made in Italy, leather belts are handmade in Abbotsford, printing is done largely offshore and fabrics are developed in Italy and Japan before being used to make key items in Australia.

LIFEwithBIRD now have four stores in Melbourne, a remarkable achievement considering they are not a high street chain store. “We were eight years in, we’d gone through hurdles and we’d built up a great business so for us going vertical was the next step,” Van Messner says. Although the financial crisis resulted in the label withdrawing from many of their US stockists, this was a move that helped facilitate the opening of their flagship store in Melbourne’s GPO.

Three more stores followed in swift succession, heightening the brand’s visibility while catering to diverse Melbourne demographics. “Having our new stores is a great avenue for us to be undertaking because it gives us creative control, creative freedom and financial freedom; it gives us scope to see what buyers and customers want. In everything we do it’s a blessing,” Van Messner says.

Along the way there have been many prestigious design nominations and awards. You know you’ve made it when Francisco Costa, women’s creative director for Calvin Klein, organises a fashion industry dinner in New York in your honour. While such a star-studded affair may represent a triumphant moment in these fashion designers’ lives, it isn’t characteristic of their career. “We’ve never been the ‘it’ label; we’ve been the underdog around town,” McCall points out. “We’ve gone about things under the radar and I think that’s been a good thing for us. We got away with mistakes because everything wasn’t on show.”

Their summer collection, called The Distance Between, will be previewed at the Sydney Opera House on Thursday, in a show celebrating their 10 year journey. The collection echoes the perennial dichotomies that have characterised their designs, as well as the evolution of the Australian landscape.

“We love to balance and contrast elements that have friction; there’s always a juxtaposition, a start and an end. It took a long time to get here and we’re happy with where we’re at. The mood and the feeling of the collection captures that,” Van Messner says.

The collection will take flight in the sparkling confines of the Jorn Utzon room, named for The Opera House’s revered architect. “The space is all wood and concrete, clean and beautiful with amazing lines. We’ve got Mark Vassallo the stylist as creative director. The show is at 9am when the sun will hopefully be coming off the water into the room,” McCall effuses, her eyes glinting.

Such a scene is befitting of LIFEwithBIRD’s 10th year anniversary, and there is no sign of them slowing down. “With every collection you’re putting your heart on your sleeve emotionally and the ball doesn’t stop rolling,” McCall says.