From a 12-foot long shop with no windows in Nottingham to a giant pink box in LA, these days the Paul Smith brand maybe considered one of the big boys. But it’s not all about stripes, paisleys and liberty prints. James Cameron sits down with the man to talk about cycling, which is where it all began. 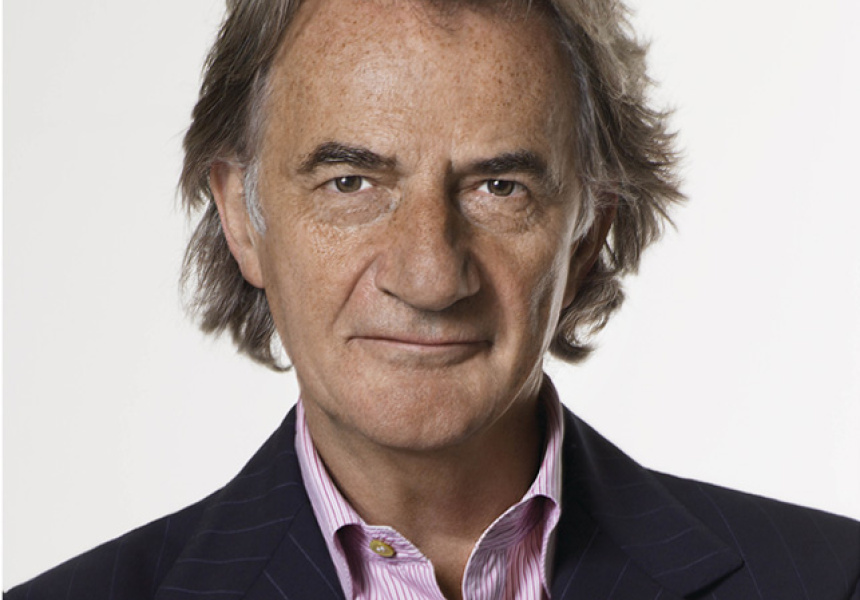 Sir Paul Smith has a coat of arms – as is the way with a knighthood. It’s a six-armed coat on a shield. This is Paul Smith, taking his serious with a lump of humour and his humour with a helping of serious. It’s a binary that is quite literally in everything he makes. And he makes millions of products every year, yet somehow, losing the personal touch doesn’t even seem like an option.

There’s that giant pink box of a building in Los Angeles. It’s on Melrose and it stops traffic, not least because there’s a set of traffic lights out front. Rather, it’s because, in some respects, it’s the LA we hope for. For anyone remotely interested in the modernist architecture movement or who has perused Julius Shulman’s era and industry-defining photographs, LA is pretty important. The flat landscape, block retail façade developments of the 40s and 50s are as American as Frank Sinatra and Miles Davis, only cleaner and with harder edges.

This is what Paul Smith calls “a squirt of lemon in the eye” – the thing, whatever it may be, that helps you remember the moment and the experience. No one’s going to forget a big pink box are they?

In actual fact, Smith flew to Mexico to view and photograph the work of the great Mexican architect Luis Barragan in one of his typical 48-hour round trips to find inspiration for his LA flagship. He returned and they built the store from scratch.

“Was there any push back from the city?” I ask. “It’s a very bright pink.”

“I don’t think so,” Smith says nonchalantly with a grin that belies the difficulty of such a task. “We did it didn’t we!”

“The pink shop was ‘Let’s do a pink shop!’ In a publically owned company, there would be debates about the image and the corporate identity…but we were ‘Let’s do it in pink’.” Impressive. This tends to be a common theme: self-belief and the independence required to pull it off.

Smith famously fell off his bike when he was 16. As a promising cyclist, the accident put an end to his dreams of a professional career, but the twist of fate was fashion, art and design. While recuperating in Nottingham, his hometown, he fell in with the art crowd. He’d never lose the love of the bike, but this new scene, with its ever-changing colour and movement, would be a fortuitous replacement.

From here, the hard yards of being young, under paid and motivated took hold. He worked various jobs within the industry to ultimately pave and pay the way to his first work as an eponymous designer. In 1970 he opened his first store. He realised then, somewhat maturely for his age, that in order to keep the purity of his work (without it committing vanilla-cide), he had to remain in charge of it. If that meant working Monday to Thursday to pay for opening his own store with his own product Friday to Sunday then so be it. This was crucial in maintaining the standard and essence of the brand. It also cemented the Paul Smith signature. In 1976 he showed in Paris for the first time.

There has been loads written about Paul Smith. A simple Google search will testify to that, but for any budding designer the take home is independence and experience. Nothing else will get the job done. Patience and maturity is next, however youthful exuberance and humour rank up there as well. Indeed, the very acceptance of this will only come through maturity and experience; it’s a wonderful ‘Catch 22’.

“Everyone wants to get there quickly, but my business grew really gently and carefully and slowly, it wasn’t like a rocket at all. So I think that has helped with the longevity…building a strong foundation.”

His first outing in Paris wasn’t an explosion of chequebooks and cash either; it was a simple hotel room-as-showroom affair, exhibiting all the flair and now signature traits (albeit modestly) of the brand and the man himself. A few choice props, a nice light, hang a jacket here, a shirt there and wait. And wait he did. A few long days passed and nothing. Then on the last, a sale and Paris wasn’t a waste. Paul Smith was an international brand, of sorts.

These days, Paul Smith, the brand, might be considered one of the big boys and for that reason there are always detractors. The cool, avant-garde and underground will see it as too big therefore too mainstream, but that would be to miss his skill and ability. He’s been there, he’s done it. Respect where respect is due, not for passing of the baton, but because during the last few seasons each new Paul Smith mainline collection has been better than the last.

The line between Englishness and Paul Smith Englishness has been blurred to the point that one can’t be separated from the other. Perhaps that’s why in recent years, the stripes, paisleys and liberty prints have been replaced with sombre Rothko palettes, deep-sea aquatic life prints or Hockney-esque block colour suiting.

Yet he is like the companies he collaborates with – Barbour, Mini, Triumph, plus others – all not so coincidentally great British brands of repute (we’ll let Mini slide on a technicality) whose aesthetic is as identifiable as their entrenched nationality.

The results have been without a doubt successful, but it’s the domain of the restless and prolific mind that these projects are born; the desire to remain creative, the realm of the truly successful, where a love or an interest can be made manifest with a simple phone call. Take the work with Rapha, the cycle-wear manufacturer, where the trade off is a clear win-win. What might have been seen a branding and advertising exercise is in fact a lot more. These are the projects that get you up in the morning. Paul Smith will sell suits and stripes tomorrow, but today he’s feeling the love for Rapha and cycling only twists his rubber arm further.

“People ask ‘What’s left, what’s left for you?’” says Smith. “And I say continuity, a business that’s got a heart, not motivated by just cash, that’s got a spirit.

“Every sock, every shoe, watches, everything. I see everything,” then pointing to the men’s and women’s mainline collections in the room we’re sitting in, “These two, I am really hands-on with.”

He doesn’t use a computer and opening his notebooks to show me some drawings – naïve little things that are sweet and funny – effectively rules out sketching the collections. His approach is to, quite simply, do it. “Training by doing it,” he puts forth, suggesting there’ll be mistakes. But keep it pure, keep it slow and let the Monday to Thursday pay for the Friday to Sunday.

“In order to keep the purity, you need to subsidise your income…I drove white vans full of suits…and by doing it you learn life skills, communication skills, body language, determination,” he continues. “These days so many just want to do the posh stuff.”

This experience, in all facets of the industry, also drives his independence, because he knows what it’s like to do the day in, day out schlep. It makes you design clothes that work. It isn’t just about talking the talk. You have to walk the walk or the cracks will start to appear. There is no doubt he could chat with kings and queens and, on the way out, have a good yarn with the cleaner.

And that talk moves on to design and young designers. I suggest that the internet has given us plenty of taste, but what of design? “It’s become very standardised” he says. “There are very few punctuation marks these days – that one thing that you remember.” Yet the precocious and the young will continue to stand out the front of the Floral Street store in Covent Garden hoping to catch Smith on the way through, folio in hand, imagining their life as that punctuation mark. And he’s a pretty nice guy – legend has it that he’s looked at his fair share of folios this way, but don’t get any ideas!

He sees stripes for shirts in still life paintings and interior photographs, potential prints in landscapes and jazz music. He reaches down to a scruffy tote bag scrunched into a ball and inside are two little digital cameras. “These go everywhere with me.” On them are photos that will become “tonnes of scarfs and prints, cloths and fabrics”. His book from 2001 You can find inspiration in everything* says as much. This is the beauty of experience. Playing to your strengths cease to matter at this point. It’s all strength when you apply a signature such as his, with his hands-on approach to the multitude of collections that are designed, very few will be disappointments.

The interview inevitably turns to cycling and, beyond the pleasantries, we discuss Cavendish and Wiggins’ successes and Armstrong’s mess (never really a fan by the way, played a team sport like a solo one, for the ego and the money). He recently recommended Scottish cyclist David Millar to the BBC to call the road race in the Cycling World Championships, exhibiting some serious clout.

Despite being 66, he is still the 20-year-old in a 12-foot wide shop with no windows in Nottingham. Little has changed. He’s maybe a little wiser; maybe the shop’s little bigger and a little pinker; the associations a little different.

He reaches into his pocket for his phone and shows me a run of text messages from Bradley Wiggins. It was a good year to be English and he’s chuffed to talk about his mate who won the Tour.

*if you can’t, then look again.

Paul Smith opened his first Australian store in Melbourne in May this year and has plans for a Sydney store soon too.