Josh Goot is an unassuming talent, something we’re pretty sure he relishes. Little secrets and revelations come to light we wander the rooms of his studio and workshop. 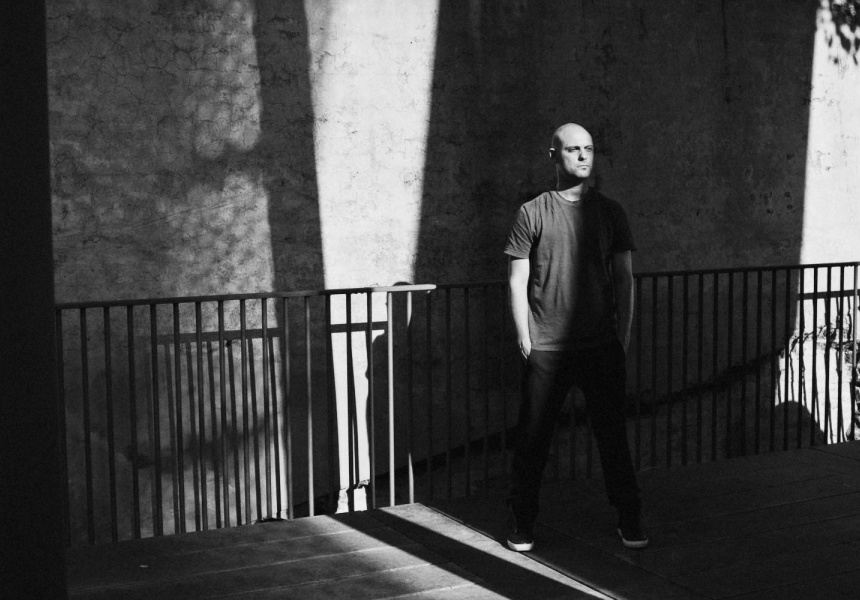 Like so many creative people the world over, Josh Goot brings his wonderful creations to life in an anonymous, nondescript brick and concrete building in an industrial estate. There’s no name or logo on the door, nothing to give away that, upstairs, silk, wool and jersey are being sculptured and built into staggeringly beautiful pieces. Instead, it blends in, and like a million other buildings in a million other estates, it goes unnoticed. There’s something special about that.

But entering the building, things begin to unravel. Hints and traces emerge. On a rack at the top of the stairs is the collection that opened David Jones’s winter launch parade the previous night. The black tuxedo jacket at the front was on Miranda Kerr not a day ago.

The newspapers are spread open to the reports on last night’s show and the photos of that jacket. Goot was chosen to open the entire David Jones winter collection, and it must be said, few things in Australia are as significant for a fashion designer. Goot’s been a ‘coming of age designer’ for a while now, but since David Jones picked up of the label, Josh Goot the brand has a whole new sense of what it means to ‘come of age’. If things weren’t serious enough before, they certainly are now.

He lets slip that in the past week the staff have been working to the last minute on re-sampling the collection for the show. Each piece was recut and then fitted to their respective model to ensure the best possible result. If there’s a time to put your best foot forward, well yeah, this is it.

This level of commitment is not to be sniffed at. The time, the undertaking and the necessary resources required to do such a thing reinforce not so much Goot’s dedication to his vocation – which goes without saying – but his absolute conviction. This is big boy stuff.

Fashion is a business, but if you’re just here for money then you’re a rag-trader. If you’re here to create and be back next season to create again then you’re a designer. Josh Goot understands the difference. He gets it.

“I can only do this the only way I know how,” he says as we browse some current samples. I know what he means as I lift the heavy hem of a silk printed skirt. Yes, there’s the expense, but it’s more that the job can only be done one way. Silks and jersey must be printed in such an intricate and strategic way that multiple pattern pieces can be cut from a single run. What look like ‘glitches in the Matrix’ on an oversized floral print (now a Goot signature) are precise allowances within the print for seams. If it sounds complicated now, think about the production process, when layers of these printed silks will need to be stacked and cut and the only tolerance is the seam allowance you’re meant to be cutting.

That Goot has been working with his cutter for five years – “almost six,” George interjects – speaks volumes. Relationships are integral in this line of work. It’s a bustling workplace of five to six people, depending on the workload, and spending this amount of time together can test the toughest of personalities.

Throughout our interview, Goot never really stops working, or the work that goes on around him. There are a million things going on in that head. As ideas flash to his mind, he acts on them immediately; some banking issues, print thoughts, pattern problems from last night’s show. Mid sentence, he politely stops speaking, gets up and asks for an assistant, relaying his thoughts and requests for some better quality embellishments (in this case elastic). He sits back down and without so much as a, “Where were we?” he continues.

It’s not impolite or impersonal. In some ways, it’s the exact opposite. When he talks, he talks to you. He gives you his attention and he listens, thinks, ponders the words and then is ready. There’s no need to elaborate or stretch the truth. That comes from success, that knowing what you have done has been right or validated. But the maturity and sageness that belies his 31 years is a product of being surrounded by good people and connections. Of support and gratefulness to the opportunities one has been given.

He is direct in other ways, and he has to be. Goot’s not running Prada down here. It’s not as easy as that. Every decision has a ramification. In essence, Goot is Prada, just that it’s on a Josh Goot-scaled budget. He could make sacrifices for margin, for profit and good times, but again, that would be missing the point. You don’t do this because it’s a job or because you even want to. You do this because you have to, because it’s in your system and you have to get it out. You get paid so you can do it again. It’s this ‘condition’ that compels you to use the best you can get your hands on, because nothing else will do. Cost is irrelevant when you’re a designer; the real difficulty is convincing the client as to why.

But that’s where Josh Goot excels. The signature and the style are his, the hallmarks and telltales instantly identifiable. Thousands of other hopefuls hang their wares in stores across the country and 70 percent will disappear into one other. Without the labels you wouldn’t be able to tell them apart. But a Josh Goot piece hanging across the room cannot be mistaken. It is bold, but wearable, unbelievably desirable and commercial, like an Aston Martin: exotic, beautiful and damned if you don’t want one.

We have been chatting in the front room of the building, a kind of anteroom stacked high with magazines, press cuttings strewn across the floor, his many successes inadvertently on display. He has shown in London and New York several times and his store in residential Sydney is a slice of modernist Los Angeles we could all use in our lives. Offering me a coffee, I can’t say I’m not shocked when Goot starts heaping spoonfuls of instant coffee into a glass. “I like it strong,” he says over his shoulder with a grin. All I can think is “I like actual coffee”, but this feels more like a necessity for Goot – an antidote to the late nights and early mornings. He may go to great lengths for the perfect dress, but the search for the perfect cup can wait. Right now it’s a jolt he needs and god knows that’s what he’s getting.

Maybe it’s the coffee, but he has great difficulty sitting still. Leaving the room, we go deeper into the studio where drawings and next season’s collection are still being developed.

The phone rings again and he apologises, but since last night’s gig and the attention that comes with opening such an extravaganza. But he’s got nothing to apologise for. This is exactly what you want when you’re visiting a studio. As he paces and talks – wandering around the racks, around me, his assistants and production manager – I get the chance to flick through the clothes and peer under hems and into jackets, looking for construction secrets. I needn’t bother. Goot hangs up after solving a sampling problem from last night’s show and tells me exactly how it’s done (“We block fuse – double actually”).

Next, we stumble across his drawings, A4 pages with flat sketches of the collection plastered across two whiteboards. Small notes have since started taking over as each sketch is scrutinised and deliberated. Printouts of the floral designs are stuck down and on some of the sketches, their placements already added.

This season features an addition to the signature flowers, a digital play with what look like ornate, gilded picture frames. It’s very Rococo, but it’s kept in check by the Josh Goot sensibility. They’re flipped and mirrored to lie symmetrically on the dress.

The layout will be tinkered with, but this new ornate print detail is something else. Put simply, it’s an evolution. “The next season has 90 styles from 60 styles last season,” he proudly tells me, “and we’re introducing new lines.”

Alongside the amazing new tuxedo that Kerr donned last night, Goot has added formal shirting and suiting to the brand, which, contrary to Goot’s history, is made using wovens, not his archetypal knits. He has chosen high quality Italian wool and shirting to fit the bill and when he explains why, I can’t help but be enthused too.

“This inspires me!” he urges, pointing to the shirt. “I want professional women to be able to get Josh Goot too.” Take a look at Kerr for how good one might look heading off to work. It is an inspiring new direction for the label.

It all plays into his approach to construction. Everything is formed and fabricated. Structure is important. Flitting and flowing aren’t words typically used here. The Josh Goot woman and style is a confident one. It’s definitely sexy, but in a way that’s unique. Knitwear is on its way too – to be launched at Mercedes Benz Australian Fashion Week this May – and it should be fascinating to see how the Josh Goot aesthetic translates. While his collection is growing and looking to appeal to a wider audience, Goot is more than aware that he mustn’t alienate or sever ties with the girls who built it. These are bold steps for any designer, but Goot spouts his plans for the future with casual aplomb, almost nonchalance. He gets it. There is never any doubt that he gets it.

Indeed, while Goot’s style is established, now it seems it’s time to grow. “We’re not a culture of fashion,” he states, talking about the general Australian approach to dressing. The implication is clear enough. While many Australians aren't aware of the differences between the High Street and the boutique, they still want to feel good about themselves, whether that be in the rat race or at the horse races.

Josh Goot is going to be bigger and better no matter which way you look at it. It will need to be commercial to succeed on a larger scale, but crucially, Goot wont need to sacrifice his standard or his process for it to work. Having planted the seeds, what Goot has to do now is deliver and from past experiences there’s little doubt that he will.

Put simply, Josh Goot gets it. He gets what it is to be a designer. His style and signature has that intangible quality, which – no matter how many years one spends at prestigious design schools, no matter how many internships and positions one takes – you either have or you don’t. His work is right. Just right.

So it’s serious now. He knows it, this room knows it, David Jones knew it last night and the rest of the country will know it soon enough.

How many more cups of instant coffee will that be?