Footwear label Feit takes on 2015 with an innovative space in New York and a new women’s range. 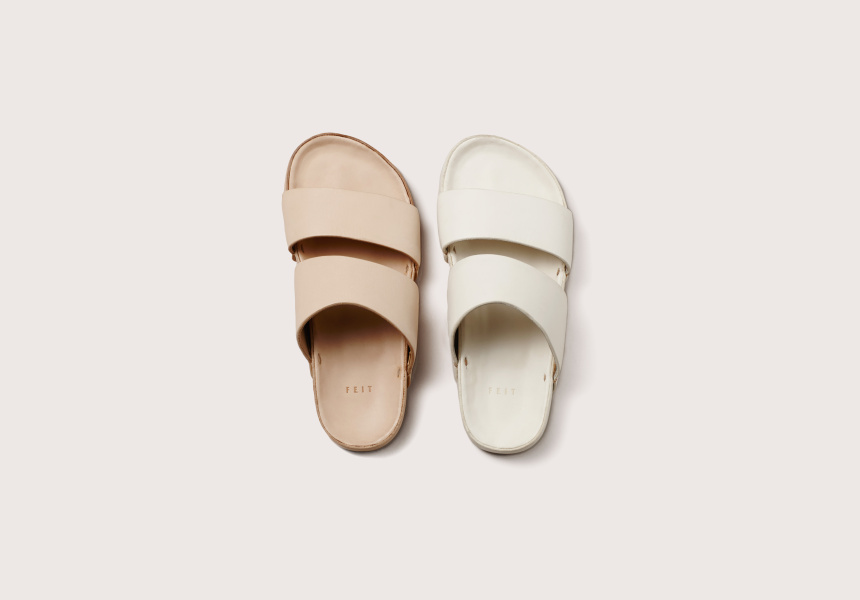 Brothers Tull and Josh Price have been in the footwear game for years. They are experienced, with a clear vision – to develop their brand in small, considered steps. Their label, FEIT, is about celebrating traditional craftsmanship and natural materials, and making and developing products in a way that is thoughtful and transparent for the consumer.

The brand started with several classic styles for men. Now it’s developing footwear specific to women to meet the increasing demand. “We’ve been asked for years to do women’s footwear, but we wanted to wait until we were ready,” says Tull. The new women’s styles include sleek leather slides and narrower versions of the classic FEIT hand-sewn high and low court sneakers, with updated colour ways and embossed speckle prints on the leather. Each design is made in limited numbers to minimise waste.

In November last year, the brand celebrated another step forward – opening a retail space in New York. To develop it the brothers worked with artist and friend Jordana Maisie. The space focuses on workmanship and different textures. It is fit out in raw timbers, concrete and hanging leather, and houses a showroom and repair station that gives customers and passers-by the opportunity to understand the production process. It makes sense for the brothers to open here; Tull lives and works in New York, also working as the director of footwear at Rag & Bone. They join other Australian designers who are developing an increasing bricks-and-mortar presence in New York recently, and the response has been overwhelming. “We have people coming in off the street, purely because the store is so striking and they want to experience it,” says Tull.

Dover Street Market, the retail space headed by Rei Kawakubo (a Japanese fashion designer and founder of Comme des Garçons) has just picked up FEIT footwear. “That was exciting,” Tull says. “I think Rei was interested because of the actual creation process, the fact that we use vegetable-dyed leathers and traditional craftsmanship.” But he’s being modest – it’s the shoes themselves that invite praise, with their immaculate design and soft leather. Unlike so many of the synthetics we wear today, the more you wear these shoes, the better they look.

Men’s and women’s styles are available online at feitdirect.com.