Another big day of fancy frocks, tousled up-dos and bold lips as we move from runway to restaurant to the Maritime Museum for on and off-site shows. 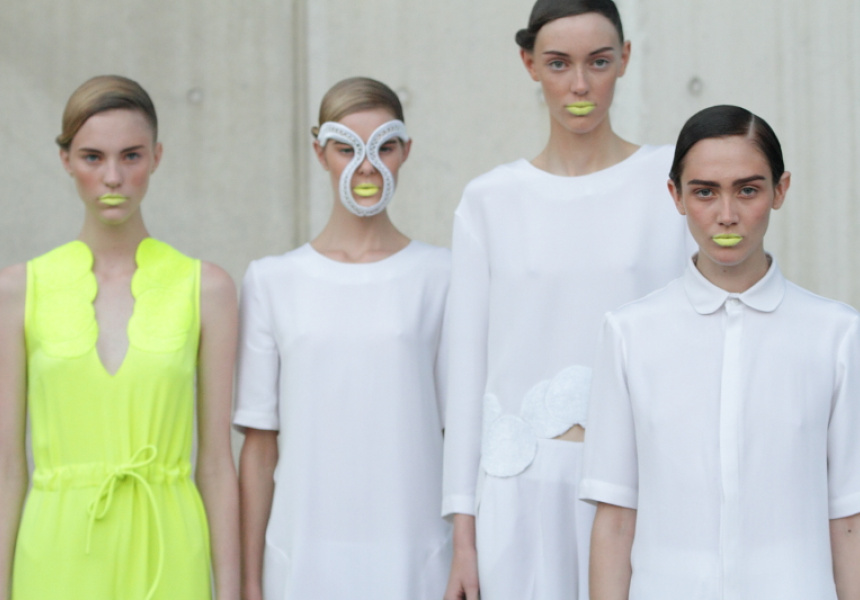 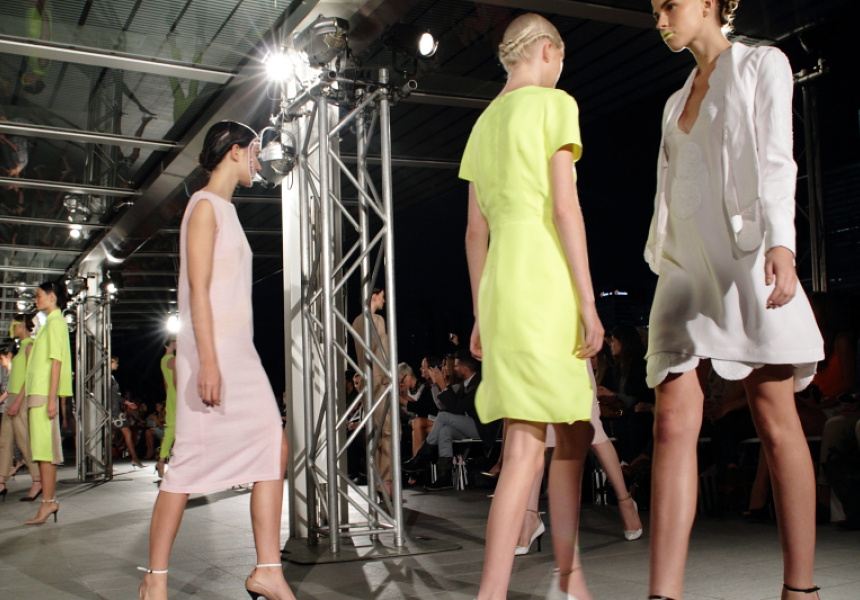 Under a crystal blue sky we waited, and waited, before finally spilling into the Tent for the first on-site show of MBFWA day two – the launch of Toni Maticevski(link)’s spring summer 12/13 ready-to-wear collection. And worth the wait it was, as Maticevski showed us once again why he is the master of cool sophistication.

A black sheer stocking skirt, which seemed to weave its way through the collection like a signature accessory, became the perfect example of how Maticevski injects a modern edge to his polished elegance. The fitted undergarment, which snuck out from under perfectly constructed 1940s-inspired dresses, conveyed the confidence and spirit of the Maticevski woman. It was as if she had reworked last night’s outfit as she strode smugly downtown the morning after.

According to Maticevski, this collection was a “detailed exploration of easy to wear, feminine silhouettes” and after 13 years of showcasing his collections in Sydney, New York and Paris, he has proved he’s only getting stronger.

Maticevski’s forays into serious made-to-measure have paid off nicely as he explores new ways to drape the female body, which by his own admission, he now understands better than ever.

As he tells it, fashion is ultimately about fun and five minutes post show he couldn’t seem to get the smile off his face. Rightly so, his show was well attended and generously received, if the cheers and an upbeat vibe are anything to go by.

For Lo Sordo, it’s a collaborative effort. “I make sure I have the best network of people around me,” he said. “We very much work as a team.”

The strongest collaborator in this tight-knit group has to be art designer Lyndall Frollano, whose array of beautiful floral prints punctuate the collection with artistic fervour.

When not working with prints, Lo Sordo explores new and exciting opportunities in fabrication and construction. Pleats, leather trims, splicing with sheer fabric and his own metallic foiling technique are all skilful and fresh.

With the sun slowly setting, Magdalena Velevska staged her aquatic-themed collection, dubbed Phosphorescence, at the Maritime Museum, Darling Harbour. The sonar soundscape set the mood as models arrived with their white or lime painted lips and intricate fabric facemasks catching the last of the day’s sunlight.

A circle motif formed the collection’s central theme and it arrived by way of point de muse embroidery, fabric cut-outs, bugle beading and cross-stitching. There was a new minimalism to Velevska’s designs that offered simple lines and only a handful of colours.

On closer glance though, every garment worked with a motif, be it a print, a high-tech phosphorous thread, metallic embellishment or embroidery. Shift or tunic dresses in diaphanous silks worked best when all the elements were colour-blocked in mint, sorbet or graphite.

With the sun well and truly gone, the show finished with a graphic, group finale. No Velevska in sight, but maybe it was the light.