As part of the VAMFF Cultural Program, Makers of Melbourne is presenting a men’s-style forum at ACMI. We chat to NGV curator Roger Leong, who is a panellist at the event. 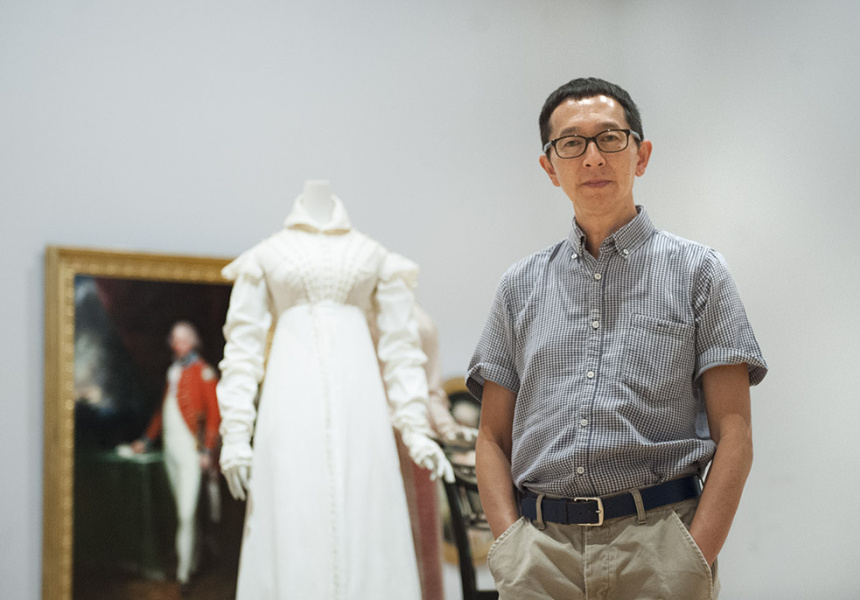 You’ve heard it time and time again – yes, we have entered a new era of men’s fashion. Men are experimenting (and spending) more, and the trend cycle for menswear has moved from a glacial pace to a quicker stride. But what has brought about this change? As part of the Virgin Australia Melbourne Fashion Festival Cultural Program, men’s style blog Makers of Melbourne is hosting a panel to dissect the historical and social influences on men's fashion. Panellists include stylist Philip Boon, denim designer Roy Christou, CEO of Grenson shoes Tim Little, author Meg Lukens Noonen, fourth-generation tailor John Cutler, and the curator of International Textiles and Design at the NGV, Roger Leong.

Leong will provide a historical voice at the forum. The NGV curator is full of nuggets of knowledge; during our 30-minute chat he manages to squeeze in multiple, obscure facts about menswear (from the early 19th century through to the 1930s, men wore quilted padding in their suits to make their pectorals look larger). He tells me about how the French Revolution shifted menswear from silks to wools, and about the origins of the three-piece suit.

As well as looking back, Leong will discuss more-recent social events that have transformed the way men dress. “We owe a lot to the whole sexual revolution really,” says Leong, who curated the popular 2011 NGV exhibition ManStyle. “First, you had the women’s liberation movement in the ’60s and ’70s which shifted the relationship between men and women. That changed expectations of both genders.” As women became more assertive and present in the workforce, men began to judge themselves as women might see them.

But perhaps the biggest influence on men’s fashion was gay liberation, suggests Leong. “It gave men a freedom to experiment and express themselves. And that went in tandem with the post-hippy phase of men wearing printed shirts and bandanas in their hair. In the ’80s, you saw a muscle building culture, which really was a gay sub-culture, and now that has become mainstream for men of all persuasions.”

Leong believes the renewed interest in menswear has a lot to do with the baby-boomers, too. “Since the 1960s,” he says, “the baby-boomer generation has really embraced the casual lifestyle; denim jeans, the whole anti-formal attitude of the counter-culture.” This laid-back approach to dressing remained mainstream for a couple of generations but now, he says, the kids are bored. “The children and grandchildren of the baby boomers want something different. They’re kind of reaching back two or three generations. I think every generation – or every second generation – wants to find its own identity.”

When it comes to men’s fashion, says Leong, Japan has long been ahead of the pack. On a visit there in 2007, he noticed young men dressing more formally, wearing pocket squares and beautifully polished brogues. “It wasn’t long after that that I noticed – through The Sartorialist and so forth – men in London, Paris, New York, dressing in that way. The Japanese man apparently spends as much as much as a Japanese woman on his wardrobe – in a younger age bracket.”

That men’s fashion has really picked up in the past 10 years is something that Leong also puts down to the internet, which has helped to spread trends as well as an exciting new spread of menswear designers. The main players being: Raf Simons, Prada, Comme des Garcon, Tom Ford, Rick Owens, Hedi Slimane (while at Dior Homme), Thom Browne (who is responsible for the cropped trouser trend a few years back) and Riccardo Tisci for Givenchy (“I think he is doing that whole butch-fem thing really well,” says Leong. “You know men’s skirts and full-on prints and that sort of thing”).

Closer to home, we are also starting to see young designers emerge who are bringing a fresh new perspective to menswear, such as Melbourne-based designers From Britten have been pushing boundaries with its use of hi-tech fabrics and modern silhouettes. “They are doing really interesting things,” says Leong.

Leong expects a mixed crowd at the forum. There is likely to be young men interested in fashion and historians who want to learn more about the evolution of menswear. But, he adds, anyone who appreciates the cultural significance of fashion will enjoy this event. “What men wear is about so much more than the need to cover up.”