With three months to go until the L'Oreal Melbourne Fashion Festival, the Designer Award finalists have been announced along with some special guest speakers. With just over three months to go, the 2011 L’Oreal Melbourne Fashion Festival is promising to continue its reputation as one of the best in the country. And just last week Jefferson Hack and ACNE Studios CEO Mikael Schillier were announced as special guest speakers along with the LMFF Designer Award finalists.

Founder of internationally renowned culture magazine, Dazed & Confused and biannual AnOther Magazine, Jefferson Hack is an exciting addition to the coveted line-up at next year’s festival. Hack has been at the forefront of new approaches in the way fashion and journalism interacts. Through the use of traditional and contemporary mediums for over 15 years, Hack has been creating content covering the here, now and what’s on the horizon for fashion and culture. Launching online ideas sharing network, DazedDigital in 2006 and AnOther mag’s online platform early this year, his work is a clear indication of how effective new technologies and the fashion industry can be successfully integrated.

Mikael Schillier has an expert understanding of the dynamics between art and industry. This teamed with extensive international branding and business development experience is one of the many reasons for the international success of the creative tour de force that ACNE Studios has become. With store projects across 9 countries (including two in our very own Melbourne) and a unique combination graphic design, film in its brand aesthetic, Schillier’s take on business and concept development is sure to be an interesting one.

Nominations have just been announced in for the 2011 LMFF Designer Award. What is often seen as an indicator for emerging talent, the Designer Awards eight finalists are a cross-section of Australia’s finest, gaining attention on the international stage; Arnsdorf, Bassike, From Britten, Lui Hon, Dress Up, Song For The Mute, Laurence Pasquier and Ellery.

With previous winners including Romance Was Born and Dion Lee, it’s fair to say one can expect exciting things for these finalists in the coming months. 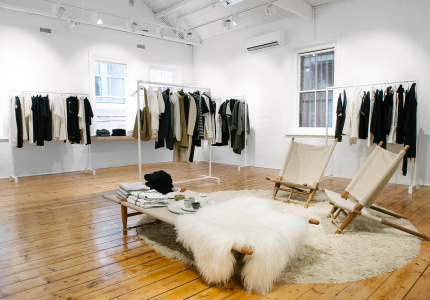