We visit the studio of Trimapee as they prepare to leave their label of six years behind to embark on a new fashion venture. 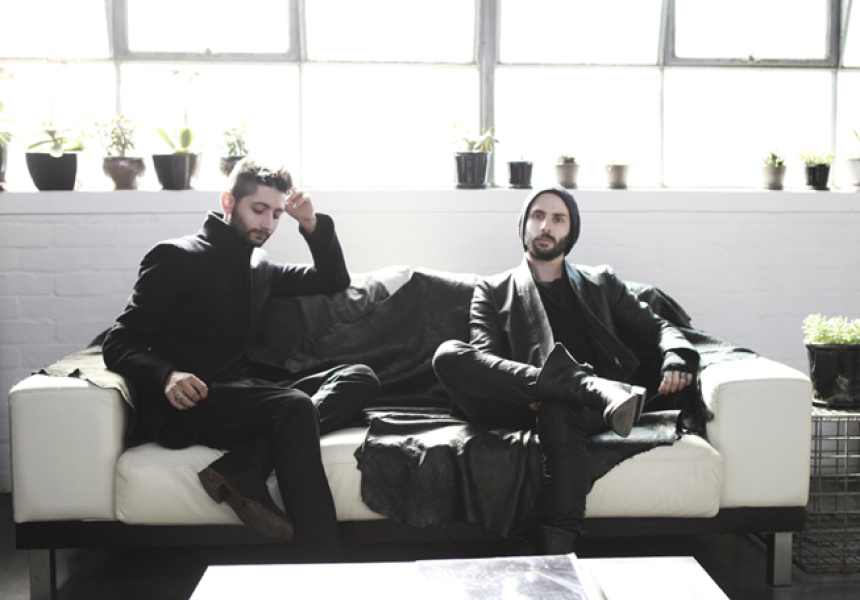 Mario-Luca Carlucci and Peter Strateas – accompanied by trusty assistant and blogger-about-town Jamie Wdziekonski – cut striking figures in their newly renovated Brunswick East studio. The three are cloaked in layers upon layers of black drapery, instantly recognisable as the designers’ work. At the back of the studio, racks of paper patterns show a glimpse of what’s to come as the designers prepare to launch a their eponymous label, Strateas.Carlucci.

The transition from Trimapee to Strateas.Carlucci will be more an evolution than a clean break. Strateas.Carlucci launched their autumn/winter collections for both womenswear and menswear in Paris earlier this year and it was clear the designer duo have stuck to what they do best, keeping the tell-tale drapes, layers and sombre palette that Trimapee has become known for in its six years on the scene. In a way, the new label marks a maturing of both the designers – who started in their twenties – and their stylistic vision. Where Trimapee’s collections have skirted the casual and the immaculately dressed, Strateas.Carlucci will focus on design elements that tend towards the artistic and precious.

“As much as I hate categorising, Trimapee’s always been more like boutique street wear. We did denim, we did suit jackets, shirts, t-shirts. With Strateas.Carlucci, everything is more refined, improved in terms of quality and our artistic direction has matured,” Carlucci explains.

One of the biggest difference between the labels will perhaps be the price range. Where the designers directed their first label at the high street market, Strateas.Carlucci will be aiming for the luxury market. Already, the eponymous label has gotten a foothold overseas, where it launched in Britain, the US, Europe and Asia in July. At a time when established designers like Dion Lee, Therese Rawsthorne and most recently camilla and marc seem to be taking the economic route by creating diffusion lines to attract the cash-strapped yet fashion-conscious buyers, it seems risky to aim for a higher price range, let alone starting overseas.

Carlucci says concerns about the reception of the new label hadn’t escaped the designers, but that starting fresh overseas relieved them of the baggage associated with an established brand. “So far we’re finding the response overseas has been overwhelming,” he says. “Strateas.Carlucci is only seven months old, but we’ve already lined up stockists in 15 stores around the world.”

Pulling out a silver necklace attached to a piece of leather – a keepsake that will come with every piece from the new label – Strateas adds that the decision to switch to the luxury route was not a financial one. If anything, Trimapee’s success was what allowed them to embark on the new venture. “We want our pieces to last or even be passed down as heirloom pieces. Every garment will come with a piece of jewellery that will change every season. It’s like a little gift.”

The designers’ attention to detail extends to the production line and sourcing of materials. Manufacturing will take place locally and the duo are working with a tannery in north Queensland for their kangaroo leather pieces, as well as getting their hands dirty and experimenting with different wool treatments to make durable winter wear.

For Strateas and Carlucci, who are both self-taught in fashion and came from a background of communication design and industrial design respectively, none of their work has ever been just about the clothing. The duo will be working on more artistic, editorial pieces and they plan on cultivating handmade jewellery, footwear and accessories lines to expand on the keepsake labels.

Aiming for a smooth transition between labels locally, the pair will be sending their debut Strateas.Carlucci collection down the runway at Melbourne Spring Fashion Week in September. Meanwhile, Trimapee will come to a halt after this winter season, with the label’s QV store to close later this year. An overseas and Melbourne flagship store could be in the cards for the new label, but for now both Strateas and Carlucci are revelling in the room to grow.