Estelle Dévé: Deviating From Her Path

As Melbourne-based jewellery designer Estelle Dévé prepares to pack her bags and move her label to London, we chat to her about the difficulties of being a young artist in Melbourne. 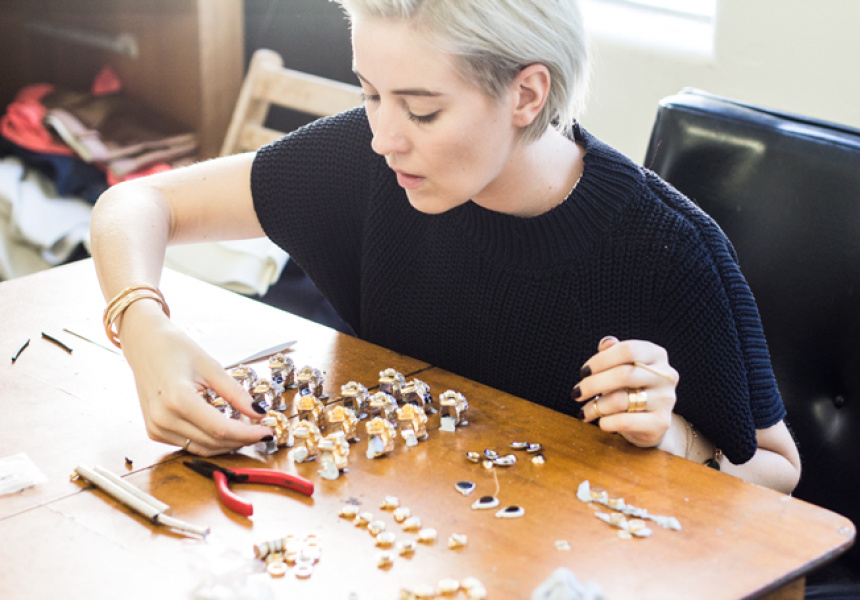 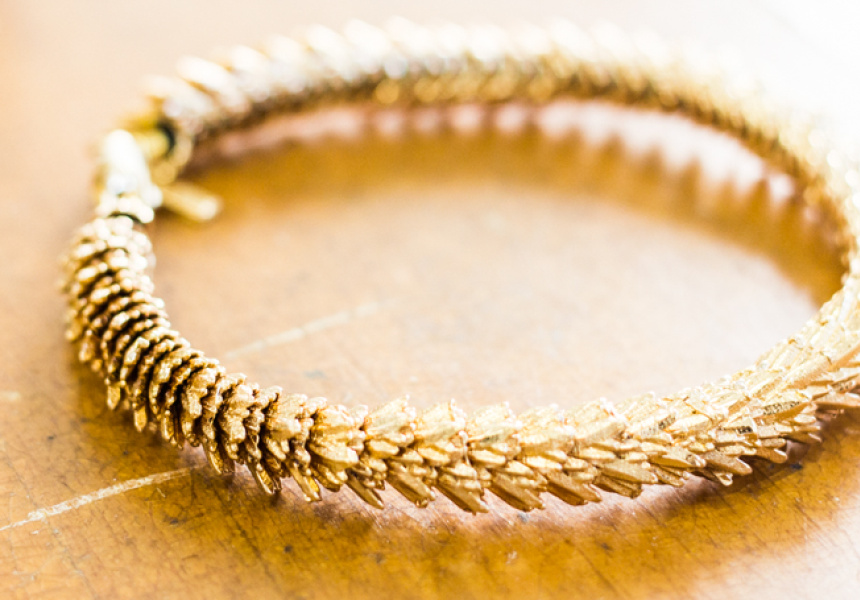 When Melbourne-based jewellery designer Estelle Dévé was taken on a much-needed holiday last year by her parents to French Brittany, she was under strict instructions from her mother to go off the grid. “My mum tried to get me to relax for a couple of days, which was nice. She said, ‘You’re not allowed to use the Internet and you’re not allowed to work the whole time.’” But for a girl who has spent the past five years putting in seven days a week on her namesake jewellery line, as well as supplementing her income with a part-time job at Acne, it was hard for Dévé to obey her mother completely. “It was so stressful, and I was trying to relax, and trying to not make her angry but at the same time I’d sneak out up the road at night time and check my emails.”

Behind the razor-sharp platinum bob and the delicate chain linked through her septum is a savvy business woman who knows that the key to success is rolling up your sleeves and working hard. “People don’t realise that every single piece that needs to be produced, I make myself. I had to make seven or eight hundred pieces last season.” Over the past five years, Dévé has largely worked alone; her load lifted at times by three interns and her little brother who flew to Melbourne from Montpellier (where she was born) to help out for a year until his visa expired.

Dévé produces her collections according to the tight fashion schedule that the boutiques she stocks are run to, and, unlike most designers who have entire teams dedicated to PR, shooting look-books, and selling to wholesale clients, she does much of this work herself. “I have two weeks to put the collection together, then I have to shoot it, then I have to sell it, then I’ll have to do the production, and while I’m doing all of that I should’ve already started designing for the next collection.”

Not that Dévé is complaining. Despite the fact that she is the first to admit that her work-life balance is a little askew, she can’t imagine not doing what she loves. “No matter how stressed I am, no matter how tired I am, no matter the amount of money I haven’t made, I never don’t want to go into work. Ever.” And her determination has paid off. Her ‘Raven’ choker and matching bracelet was featured in the holiest of jewellery grails – the ‘Bijoux’ section of Vogue Paris late last year. It was Vogue Paris’s jewellery editor that got in contact with her. “She just emailed me and was like, ‘Hi!’” The names of the magazines that then began knocking at her door reads like an all-star fashion bibliography, with Vogue China, Vogue Russia, Elle US, Elle UK, and Numero also requesting her pieces to shoot. And with high-profile models such as Hanne Gaby Odiele showing off her chunky jewellery, Dévé’s reputation has soared.

It isn’t the international attention that Dévé’s jewels have garnered that has prompted her move overseas. She has realised that the smaller market of both customers and suppliers in Melbourne means that if she stays here she won’t be able to make the money she needs, not just for her label to survive, but even for herself. “I can’t keep working seven days a week to barely afford rent, you know?” One problem is the limited number of people with the very specific skill set she requires. With only one or two technicians available who can plate or cast her jewellery, the lack of competition means prices are high and deadlines are loose. At the time of this interview Dévé is still waiting for pieces from one of her suppliers who made a mistake with her order back in November. After being closed for two months over the holiday season this has meant that she still hasn’t got the pieces she needs, two-and-a-half months later.

Having sold her line in Paris and London during the fashion week circuits, Dévé also realised that the market for selling her higher-end pieces is much bigger in Europe. While she has a cult following in Melbourne – that laps up her raw, handcrafted trinkets faster than it can place a coffee order – over there her intricate necklaces sell in the snap of her bejewelled fingers. In Australia they are more of a struggle to sell.

The potential to work with other big-name designers in Europe is also a major draw-card for Dévé. Despite Camilla and Marc and Osman using her jewellery for their shows in the past, the prospect of collaborating with other creatives to work on an aesthetic that differs from hers is a refreshing challenge that Dévé hopes to take on. And who would be her pick to work with? “Christopher Kane. Definitely. Because I could work with a whole lot of crazy options and materials. It’d be so good.”

Although the bright lights of London beckon enticingly ahead, this move doesn’t come without its costs. Dévé’s boyfriend of three years is unable to make the move with her. “It’s pretty horrible, to be honest. But I’ve worked so hard and I’m not going anywhere. I’m pretty much at the limit of where I get to over here.” Although it’s sad to see a bright mind leave our shores, we’re sure we’ll be seeing plenty more from her yet. Mr Kane, Ms Dévé is on her way.