Aaron and Maryanne Moodie – an Etsy designer and a tapestry weaver respectively – share the story of how they first met, plus some stuff that happened after that. 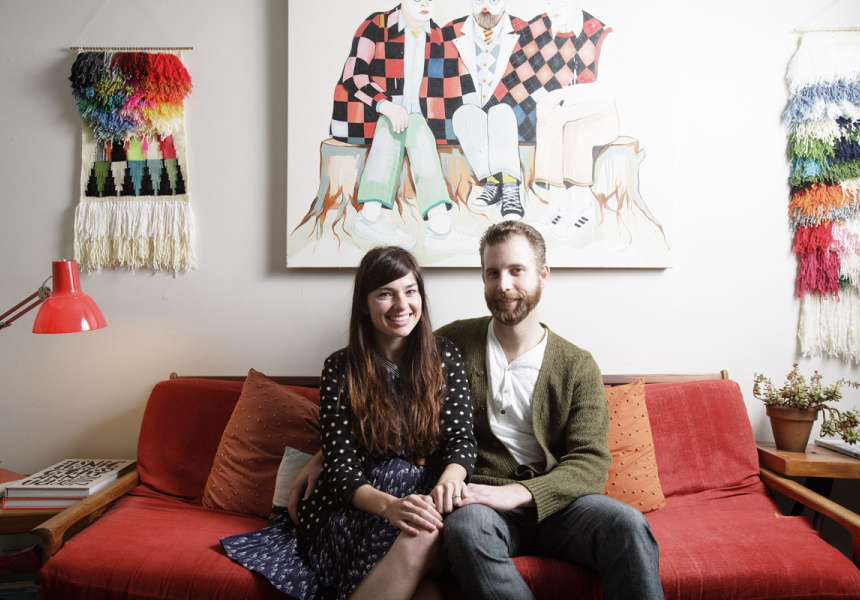 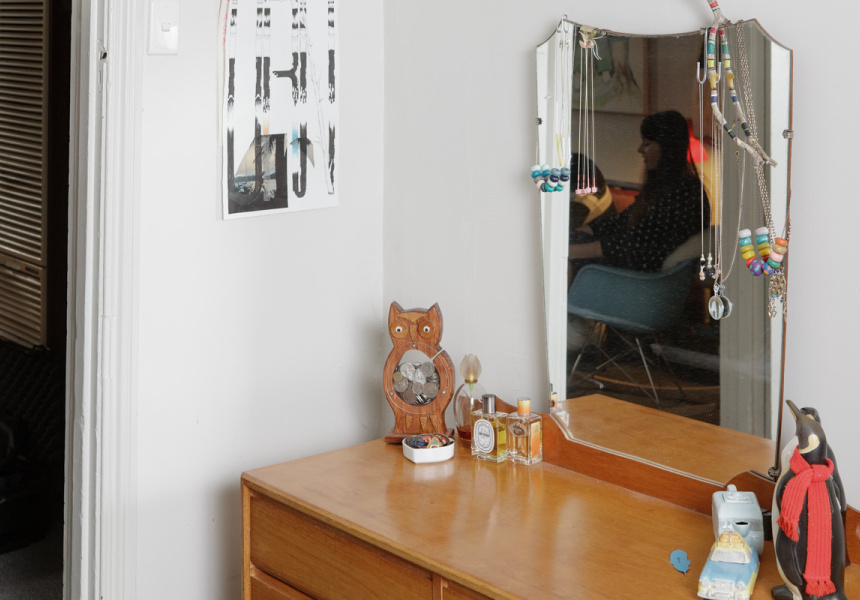 It takes confidence for any girl to ask a guy out. It takes an abundance of self-assuredness to do so while the guy in question has a different girl seated on his lap. But that’s exactly what happened when Maryanne Bridges, a creator of woven tapestries, art teacher, former vintage shop owner and now Etsy seller, met Aaron Moodie, a user-interface/user-experience web designer, at a party in 2009.

“We were at the Nicholas Building for our friends Nest Architects’ Christmas drinks,” starts Maryanne. “I spied Aaron from across the room and thought he was very handsome. I sidled up to him as we were taking the lift up to the roof and introduced myself. At the end of the night I asked for his number, even though another girl was sitting on his lap. I texted him on the walk downstairs and asked him to lunch the next day. He said yes,” she pauses before adding, “It took a summer of struggle-town love to figure it out but we were on by Valentine’s Day.”

It’s a quality that Aaron loves in Maryanne: “One of the things I love most about Maryanne is her certain disregard for rules. I was surprised when she asked for my number and even more so to get a text message minutes later. That said, Maryanne’s description, ‘summer of struggle-town love’ sums it up quite well. She took some serious winning over, but I got there in the end.”

Indeed, Aaron’s “long legs, tight jeans and a handsome beard” got the girl and in 2012 the couple tied the knot, before welcoming the arrival of their son, Murray. In the same year, Aaron was approached to work as a designer for Etsy, a job that offered flexibility in those challenging early months of living with a newborn. “The flexibility to be a remote employee has been great in terms of helping out with Murray,” admits Aaron. “It does tend to mean my days are quite long. I'm up before he is for meetings with the Brooklyn office, and am still finishing off the day’s communications around 10 to 11pm. The trade-off is that I've been able to be a big part of Murray's life, which is not something every father gets to say.”

For Maryanne, it’s allowed her time to develop her growing tapestry business, a craft she only discovered after Murray’s birth. “Aaron’s usually online early for meetings with NYC and then we all get to eat breakfast and plan out the day. It’s allowed me to continue to make meetings, classes and spend time on the loom.”

The couple will embark on another life change this month, relocating to New York so Aaron can work within the Etsy offices. “Initially, I thought this was a move to support Aaron and his work and thought it was a nice opportunity to focus on family,” starts Maryanne. “But I’ve come to realise how much it will benefit me too. I’ve been in contact with some weavers in the US as well as some galleries. I’ve had offers to teach classes in California, Texas, Canada and New York. The internet is an amazing thing and I feel like the move with help my craft grow.”

“I think what Maryanne does is inspirational,” says Aaron with genuine excitement. “That she’s gone from wanting to start weaving to producing such incredible pieces in such a short time is testament to her skills and passion, but that she then turns around to lend a hand to those starting out is what makes her craft, and herself, so inspiring to others.

“The move had to work for both of us. I don’t think it would have been an option if Maryanne had to take a backseat, so to speak. It will be hard being away from family and friends, but I think there’s an opportunity there for both of us to grow in our respective fields and interests.”

Adds Maryanne: “I’m hoping to get a massive loom too.”