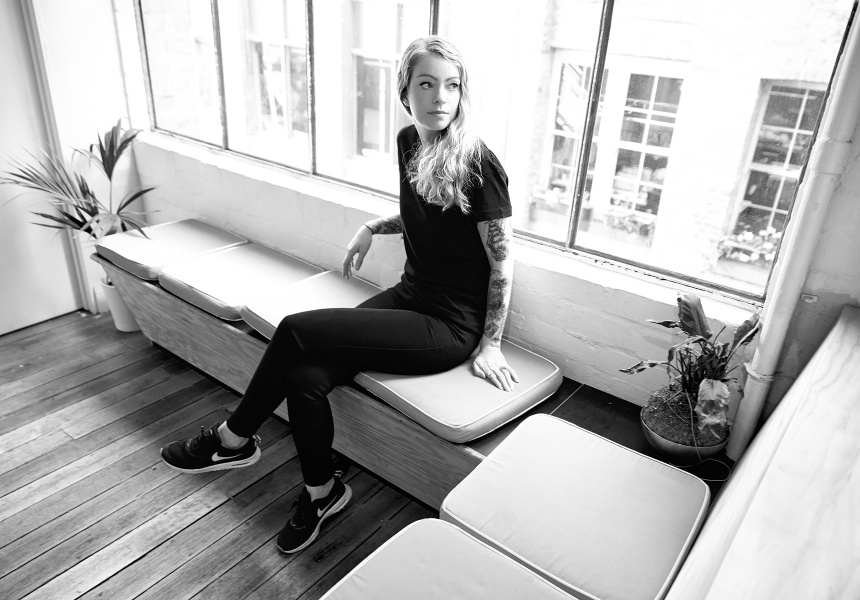 An all-black outfit isn’t always a sign the wearer doesn’t know how to put colours together. It can be just the opposite.

From a tattooist to an activist, these three women spend their days playing with colour, but choose to wear black on their most personal canvas. Citing everything from convenience to its tendency not to show up ink spills, we learn how black plays a key part in the wardrobes of inspirational women.

“You want to wear something simple, because tattoos are already a costume,” says Zoe Dennis.

Straightforward statements such as this are a good illustration of the way Dennis approaches her practice. Along with partner Matt Wisdom, Dennis opened The Melbourne Tattoo Company in the CBD in 2013.

After completing a diploma in visual arts after school, most of Dennis’ work focused on film photography. It was being around Wisdom, who has been a tattoo artist for more than 13 years, that pushed Dennis to try it out.

Not only was Wisdom her teacher, he was also her first canvas.

“I did a nautical star. I don’t know why I chose something with straight lines … but it’s still there from 2002. He hasn’t covered it up!”

Dennis now spends four days at the shop tattooing, one day taking care of the business side and most of her down time either hanging out at local East Brunswick haunts East Elevation and Brunswick East Project, or painting designs for the shop.

“I specialise in American traditional and Japanese tattoos, but if someone asks for an infinity symbol, I’m going to give it to them.”

As a painter-cum-textile-designer, Jayde Day depends on her eye for mixing colour.

“Textile design makes my art more functional and gives it a broader audience,” she says.

Originally from Sydney, Day moved to Melbourne two years ago. She has worked with the “pyjama girls” Masini and Chern, and is currently working on her own line of cushions.

“I think young creative people are more supported in Melbourne,” she says. “I really like the way each Melbourne suburb has its own theme.” Day points to Northside spots such as Cafe BU and Neighbourhood Wine as venues that bring to life her local area.

As a painter, Day’s art is an abstract confluence of colour – at times soft and ethereal, and at others bold and moody. But Day often chooses to wear black.

“Black is a good disguise, it can become a bit of a uniform,” she says.

“I love working with colour and mixing colour palettes, but [dressing in] black is a way to remove yourself from what you’re doing.”

“I’ll always play with texture, so I’ll wear black leather but then mix it with a softer material. That way it isn’t as harsh.”

For model and social activist Ollie Henderson, wearing black is the opposite of a sartorial cop-out.

“If you wear nice colours, you know you’ll stand out – that’s easy. Wearing all black and still looking creative is more of a challenge.”

Sydney-based Henderson is well aware of the power of fashion to attract attention. She started House of Riot last year, a movement to empower young people around the world and give them a voice on issues such as racism, sexism and climate change. Handing out 100 homemade T-shirts to her fellow models and friends, Henderson bombed Mercedes Benz Fashion Week 2014 with slogans such as “Reject racism”, “Abort Abbott” and “Sexism sucks”.

It proved effective in spreading the word, and almost one year later, House of Riot is still kicking, hard.

“There are a lot of chain motifs, it’s less about the slogans this time.”

Henderson sells the clothing on House of Riot’s website and donates 20 per cent to charities such as Amnesty International and One Girl, and is clearly inspired by ‘70s punk, both in ideology and aesthetic.

“I love leather and the cyber punk look. I actually collect pairs of goggles.

“At model castings though, it has to be a lot more simple. You need to be a blank canvas someone can paint on.”

Nobody Denim #PowerBlk jeans are available online and in store now. nobody.com.au

This story was produced with Nobody Denim