Camping Out for Kanye

We went to Kanye’s “Pablo” pop-up to find out who queues all night for a long-sleeve tee. 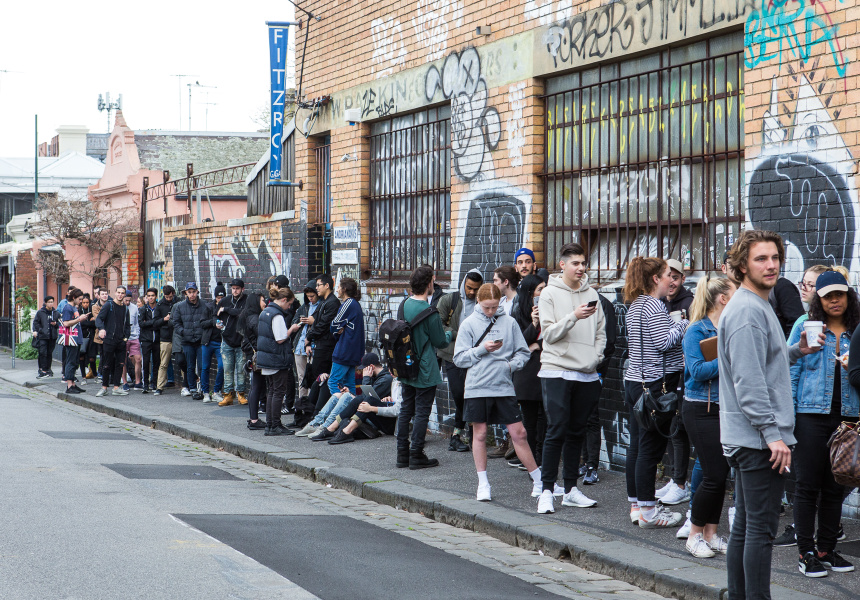 From the blacked-out shopfront of the Kanye West Pablo pop-up store on Brunswick Street, a hero emerges.

“Ah, I just picked up the essentials, y’know?” says 17-year-old Leon Howard. Behind him, the front door swings shut on a glimpse of yellow T-shirts hanging sparsely on a rack. Dressed in a black tracksuit and white Adidas cap, Leon and his friends have been camped outside the pop-up store since 4.30pm the previous afternoon, and were the first in line. They’ve just spent 20 minutes inside the shop.

“I got the classic Ultralight Beam T-Shirt ($60),” says Leon, digging through his bag. “The Melbourne Cap ($50). And then you’ve got the hoodie. It’s a tan-colour hoodie, it’s really nice. Not that expensive.”

The True and Legendary Sand Hoodie is retailing for $125. It looks nice.

“That looks fucking sick,” says someone waiting in line. Another shopper emerges, triumphantly putting his own hoodie on nearby. He stands on the footpath next to his friend’s P-plated Mazda, modelling it for a swarm of phone cameras and photographers. Fox FM interviews his mate, wearing the We Young And We Alive Sand Long Sleeve T-Shirt ($90), while he loads his bag of clothes into the boot of his car.

Leon and his friends’ early arrival – and refusal to sleep for the following 15 hours – has made them minor celebrities. This is their fifth interview this morning. “We were ’gonna go home and come back,” says Leon, “but then everyone started rocking up and we thought we may as well stay.”

Leon spent $290. His older brother Sam, responsible for getting Leon into Kanye’s music, spent $300. They’re supposed to be at school. Someone nearby spies their haul and comes over. “Is there a limit to how much you can buy?,” he asks breathlessly. No limit. “So you can buy as much as you want? Far out.”

It still does. Under drizzling grey skies, a queue of 700 to 800 people snakes up Brunswick Street, around the corner to Moor Street, and around again down Fitzroy Street. It is extremely likely Kanye has given directives to not supply True and Legendary Sand Hoodies to these uninspiring latecomers.

Is Ben here because of Kanye’s music? Or the hype?

So if Kanye’s new album wasn’t good, he wouldn’t buy this merchandise?

“Um. I mean, Yeezus wasn’t his greatest album,” he says. “But his merch still sold out.”

As Ben waits, Leon, Sam, and their two friends are whisked away to pose for photos outside the store. Between a closed Nelson Alexander Real Estate and a Nique clothing outlet brimming with T-shirts and hoodies but no customers, the four boys hold their bags of T-shirts (Who Your Real Friends White Crewneck – $120) and hoodies (Woke Up And Felt The Vibe White Hoodie – $125) aloft in tired relief. They raise their fists and cheer.

The Pablo pop-up will be open at Collarts, 209 Brunswick Street from Friday 10am–8pm, Saturday 10am–6pm and Sunday 11am–5pm.