Once a major player in the Australian fashion industry with her handbag and accessories brand Mimco, Amanda Briskin-Rettig returns to the fold with her new high-end leather goods label A-Esque. 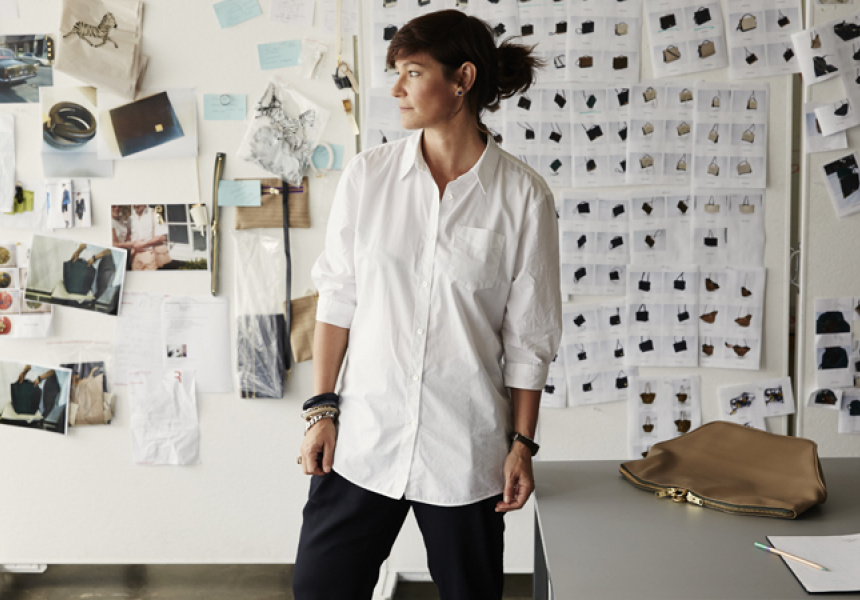 You may not be familiar with her name, but it’s a sure bet you have heard of her handbags. For over a decade, Amanda Briskin-Rettig’s brand Mimco monopolised the Australian leather goods market, with virtually no other Australian designer doing luxury handbags. In 2007, Briskin-Rettig made the bold decision to sell the company to Witchery Holdings, for which she reportedly received a hefty $45 million. Now, after some time away, Briskin-Rettig returns to the fold with her new high-end label A-Esque.

Briskin-Rettig’s success story follows a familiar narrative. In 1996, when she was 24 years old, she decided to give up her corporate job in IT to pursue a more creative career. “It’s very cliché,” says Briskin-Rettig, who says her entrepreneurial family inspired her to make the leap. “When I said I was going to do it they said ‘great’.” With $5,000 in the bank, she took five designs to overseas factories and started sampling products. Instead of approaching fashion boutiques, Briskin-Rettig started selling to gift and lifestyle stores, which she says was where the customer was going at the time.

Part of the reason for starting an accessories label, she says, was because she could never find a bag she liked. Yet Briskin-Rettig could hardly have predicted just how many others felt the same way. She had discovered an untapped gold mine and before she knew it, the company was turning over millions a year. “I think with Mimco it wasn’t just about the product,” she says. “It was also about how it was offered.”

But as Mimco’s wholesaling base grew, Briskin-Rettig started to feel like she was losing control of the brand’s vision and was unhappy with how the stock was being displayed in stores. “That very much drove me to retail,” she says. In 2001, Mimco opened their first store in South Yarra and a few years down the track, they were selling solely through stand-alone boutiques and David Jones.

Then came the move to sell, which she says did not seem like such a big decision at the time. “You know those big moments in life?” Briskin-Rettig muses. “A whole set of circumstances were just right at the time.” She happily admits that financial stability played a large role in parting ways with Mimco. “I’m not ashamed of that either,” says the mother of three. “The point is it was a riskier position to be in and I’ve got kids and I’m quite glad to have that security. I don’t actually feel like I gave up anything truly significant or soulful because that sort of creativity is within me.”

In the time since, she has been doing consultancy work for other brands and says that she has enjoyed exploring other people’s ideas for a change. But after a while, the desire to design returned. “I came up for air then I said ‘lets go again’,” she says. This time, Briskin-Rettig wanted to scale things back, go higher end and keep manufacturing local, removing the many layers that come with running a big business. In October last year, A-Esque opened its doors in the space Collette Dinningan previously occupied on Chapel Street.

Briskin-Rettig imports all the leathers from Italy, while the cutting and making takes place in her nearby Richmond workroom. Because of the nature of making handmade products, A-Esque runs in limited quantities, with new pieces frequently added to the store. “[A-Esque] is not bench marked by what I’ve done in the past,” she says. “It is authentically its own thing and that’s why I’m enjoying it and…why it is challenging. I’m not ignoring my past, I’m using that knowledge, then doing it in a different way.”

Handbags are a high-end label’s gravy train and are usually heavily branded. Briskin-Rettig wants to shift the focus. Although she is creating luxury goods, she does not want her bags becoming a symbol of status. “I’m feeling very anti-brand,” she says. “I’m feeling very anti ‘it’ bag. I want you to buy something because you like it and you are going to enjoy it as a private luxury.”

At this stage, Briskin-Rettig is happy to take things slowly, step by step. She sees A-Esque expanding into jewellery and perhaps the international market. “But then again,” she pauses, “it’s about making sure my appetite is not bigger than my stomach. I’d be very disappointed if I wasn’t doing something well.

“It’s just about keeping that in check and staying level-headed.”