This. at the Substation

entertainment
Wed 26th May, 2021 – Sun 6th June, 2021
The Substation
1 Market Street, Newport
Price: $45-$50
Buy Tickets
After the infuriating year that was 2020, David Woods wants to immerse us in This., a kaleidoscopic, unclassifiable theatrical event that references the work of Dutch Renaissance painters Hieronymus Bosch and Pieter Bruegel the Elder.

This. is a slippery proposition, and theatre-maker David Woods isn’t going to be drawn into an absolute description. Mud wrestling is mentioned in our conversation, as is a beached whale. Conspiracy. Terror. Hope. After a year of layering dozens of set pieces by 32 writers and dozens more performers, crafting it into a vast tapestry of contradiction and frustration, Woods is ready to open the doors on This., an unclassifiable theatrical event unfolding across three floors of Newport venue the Substation as part of Rising festival.

Woods says the various layers of the work respond to the increasing division in society, the gig economy, and the increasing precarity many of us find ourselves in.

“In brief, it’s going to be surprising and visceral,” he says. “Possibly infuriating, possibly enlightening, and possibly extremely therapeutic. I guess it’s a bit like going to an art gallery. You may try to sample it all, or you might just be content with just experiencing one painting.”

This. draws on Woods’ admiration for Dutch Renaissance painters such as Hieronymus Bosch and Pieter Bruegel the Elder. Both crafted rich landscapes densely populated with chaotic and endlessly surreal detail.

“If you look at [Bruegel’s 1560 painting] Children’s Games long enough, you can feel like you’re playing those games,” Woods says. In a long look at the painting you’ll find children playing bocce, hitting piñatas, pirouetting, pissing and piggybacking. “See if you can find the girl stirring a turd,” says Woods. “It takes a long time to find that, but it’s so satisfying.”

Bruegel painted peasants – the kinds of people that history wasn’t interested in. “The narrative of ordinary folk can be foregrounded in amongst this bigger story, the classics if you like,” Woods says. “I liked the idea of having all these collaborators tapping into real world narratives and lived experience.”

The title alludes to the show’s multitudes. “It’s shorthand for ‘How good is this?’,” Woods says. “Also, ‘Fuck this’. It’s also an anagram of ‘shit’.” And let’s not forget it’s internet shorthand, commonly used to express approval towards specific political or social commentary. The word encapsulates the overriding theme of the show (and perhaps the overriding state of 21st-century life): infuriation.

Woods spread his funding as far and wide as he could, assembling the show from creators from around the world. All were asked to work from the theme ‘infuriation’. And in a world that suddenly had no use for theatre, there was plenty of infuriation to mine.

“I wanted to give work to a lot of people, to help keep the sector going,” says Woods. “I lost key collaborators because they had to go get full-time work – they couldn’t live with the fragility of being an artist anymore. That’s been devastating. Artists have been labelled ‘non-essential’. That’s pretty hard to live with when you’ve eked out a life as an artist for so long.”

But with all this talk of fury and isolation, Woods’ main goal is to pit people up against hardship in the hope that they come out more connected, more aware.

“I hope there’s some catharsis,” he says. “Acting things out in an imaginative realm gives people the opportunity to try things out. If you learn anything, I hope it’s how good it feels when you help someone.” 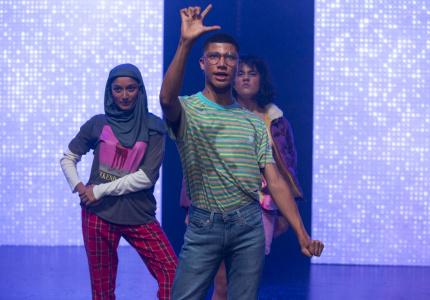