Entertainment
Wed 18th May, 2022 – Sat 4th June, 2022
The Malthouse, 113 Sturt Street, Southbank
Price: $35–$75
Buy Tickets
Building on first-hand experience and centuries of trauma, a new play discusses the widespread theft of First Peoples’ bones – and their long road home. Its creator says the work is a painful but vital step towards national healing.

About five years ago, when the media rhetoric around January 26 was taking a nasty turn, proud Yorta Yorta man and theatre director Jason Tamiru saw the need for national healing.

“People were telling our people to get over it,” he says. “There’s a lot of work involved in getting over the history of this country. There’s a lot that people don’t know about. Untangling that brings up a lot of fragility for whitefellas.”

Tamiru’s new play, The Return, tells one of these lesser-known stories.

The foundations of Australia as a penal colony, the genocide of Indigenous people and the dispossession of the land are all widely known. Less so is the serial theft of human remains in the name of science, curiosity and profit. Many of these remains were sent overseas to foreign museums. Until as late as the mid-20th century, land wasn’t taken – people were taken from the land.

The Return spans centuries, from “when white people came to our country with big ideas that didn’t include us,” as Tamiru puts it, through heartbreak and disconnection from Country, to the eventual laying to rest of remains. The script, by Torres Strait Islander writer John Harvey, weaves a path through three narratives – that of a repatriation officer, a museum curator and a bone collector.

“It’s a 200-year story,” Tamiru says. “In whitefella culture, there’s a full stop and the story ends. But there are no full stops in our culture. Those spirits are still here today. 200 years isn’t a long time.”

Tamiru developed the show based on his own experiences. In a previous career he was a cultural heritage officer for Aboriginal communities in north-west Victoria, and was involved in the repatriation of bones from international institutions.

“It’s something I didn’t think I’d ever do in my life,” he says. “I wasn’t prepared. But we weren’t prepared for colonisation either. We have to do some jobs that not a lot of people do.”

There were complicated protocols to navigate, both in the sacred business of different Aboriginal groups, and the bureaucratic processes of international institutions. There was also a practical side, which left indelible impressions on Tamiru.

“A lot of bones get returned to keeping places, like Museums Victoria,” Tamiru says. “I’ve seen keeping places with maybe fifty to sixty people’s bones in them. Which was … ” he tails off. “I’ll never forget that. That was full on.”

Tamiru says the process of repatriation has been healing for all involved.

“They register[ed] us as letters and numbers,” he says. “They dehumanise[d] us, which [made ] us easier for them to trade and ship us around the place, an arm here, a head there, a foot there… But once you put a human face on it, you’re looking someone in the eyes, you get an emotional response. Everyone can relate to the idea of this happening to their loved ones. So they [the institutions returning the remains] totally get it, and they want to do the right thing.”

He wants the same for the show – to remind people that the murdered, the kidnapped and the stolen were not just statistics, but real people.

“That’s why I want to tell this story,” he says. “People want to move forward, they want to heal. Not only our people – the healing our community gets from [bringing] our people back home is enormous. But it’s also the wider society. We have to address that darkness head on.

“Sometimes it’s traumatic, but you have to go forward.” 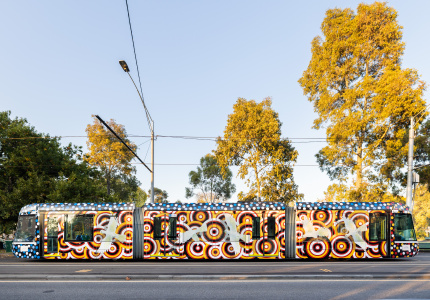