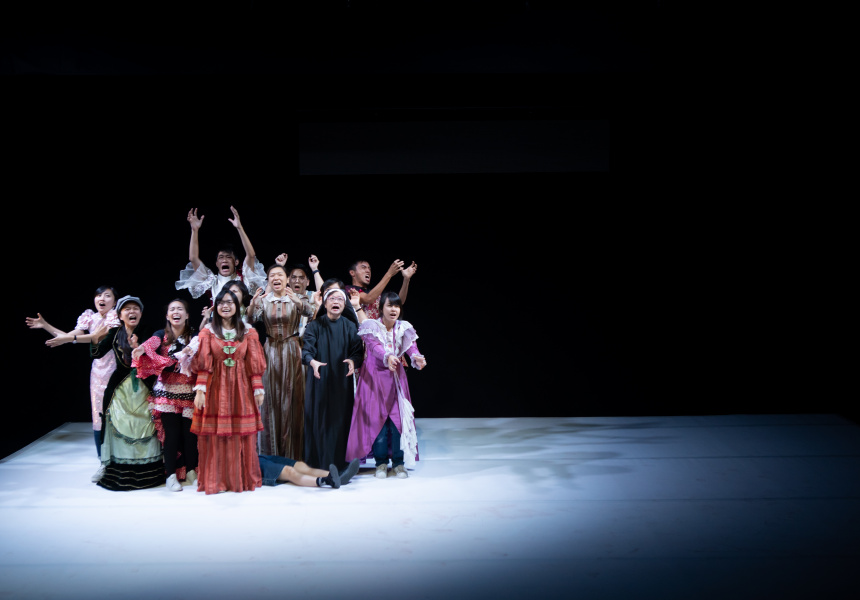 Self-disembowelment, gouged eyes, vials of poison, arrows through ankles, men accidentally stabbed through curtains, wailing, weeping, fainting. The great onstage deaths of the past several hundred years definitely have a distinct flavour. But one Australian theatre collective post, has thrown all that in a blender to create the theatrical experience Oedipus Schmoedipus, coming to Melbourne next month.

Oedipus Schmoedipus cuts and pastes hundreds of death scenes from ancient mythology and classics into a live-action, Itchy-and-Scratchy-esque gore-fest, flipping classical theatre on its decapitated head for 75 minutes of OTT bloodshed.

After its Sydney Festival debut in 2014, followed by performances around Australia and South America, the comical and confronting all-female epic returns for this year’s Asia TOPA – the country’s largest performing arts triennial – bathing Union House Theatre at the University of Melbourne in litres of the neon-red stuff. Its most recent iteration was made as part of a collaboration with Hong Kong Repertory Theatre. It’s one show, but with two productions: an English language production (surtitles in Chinese) and Cantonese language production (surtitles in English).

While the production is full of humour and brutal parodies, creators Zoë Coombs Marr, Mish Grigor and Natalie Rose also pose the question of why we are incapable of facing mortality. To help audiences find the answers, they’ve examined 2500 years of scripted murders and suicides, and connected the dots in a contemporary context.

The cast – including a group of 25 volunteers, who are invited to join the carnage as a makeshift Greek chorus every night – will croak and resurrect over and over. It’s smart, silly and serious all at once, but (unlike some plays by dead white guys) never dull. Plus, it makes for excellent dinner-party conversation. But if you’re seated in the front row, perhaps avoid wearing white.

A strictly limited season of production in English and Cantonese performances will run from March 18 to 28.