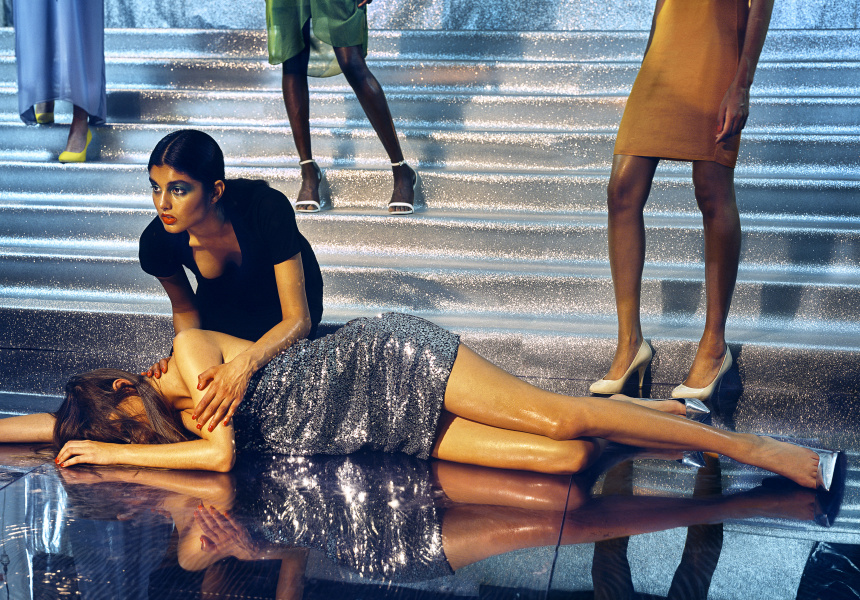 Darren Sylvester: Carve a Future, Devour Everything, Become Something

The first thing you’ll see in the Darren Sylvester retrospective at the NGV, titled Carve a Future, Devour Everything, Become Something, is a photograph of three teenagers enjoying KFC.

At first glance, you might search for some ironic, subversive element. But you won’t find it. Teenagers enjoy KFC, and this photograph shows them doing just that. The work is called If all we have is each other, that’s OK (2003).

Sylvester is a photographer, musician, filmmaker and installation artist who makes glossy, dramatic visual art and glossy, dramatic pop music. It’s simple, but not simplistic. Fake, but not facile. He’s dismissive of the idea that there has to be some grand intention behind his work. He finds inspiration anywhere and everywhere: on TV, in catalogues, in shops.

The result is a series of beautiful falsehoods inspired by his pop culture obsessions. Carve a Future, Devour Everything, Become Something is a greatest hits package, including photos, sculptures and videos created over his 20-year career.

There’s a shadow of death over all of Sylvester’s work. Pop culture is not designed to last. In a matter of weeks, a pop song can climb and fall out of the charts and a TV show can be cancelled and forgotten.

Several of these little pop cultural deaths are memorialised in the NGV show. Old McDonald’s burger wrapper designs have been transformed into upholstery for a pair of psychiatrist’s couches (the Filet-O-Fish one caused a stir last year when Katy Perry draped herself across it at the Melbourne Art Fair). Sylvester loved the designs as a kid, and remembers saving the labels on a school excursion sometime in the ’80s. Now he’s immortalised them, moving them to a gallery, a space we’re taught is for valuable imagery.