Gallery: A Day at Laneway

It might have outgrown its namesake, but Laneway Festival still loves music. 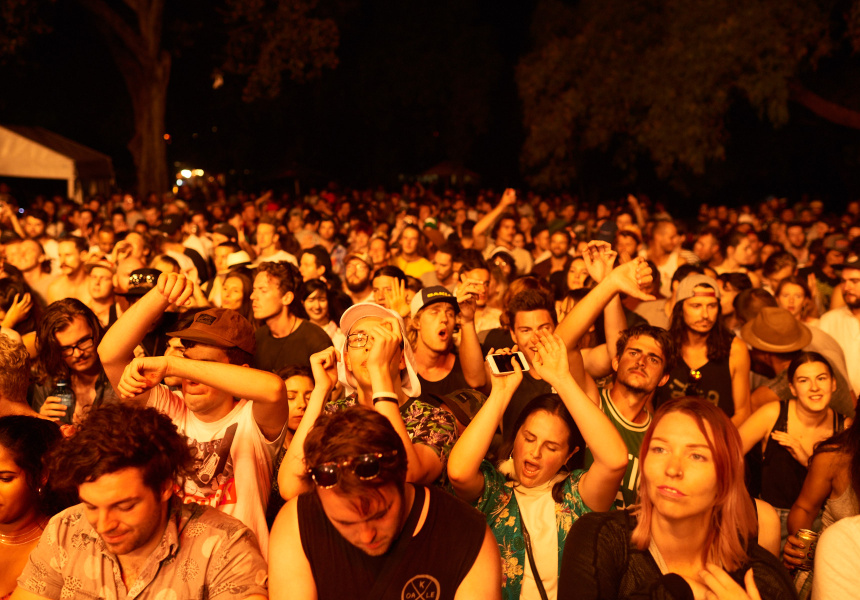 Photography: Sebastian Petrovski
1/30
by Will Cox

"Why the hell is it called Laneway Festival anyway?” asked a punter on the train out to Footscray on Saturday.

It’s been six years since St Jerome’s Laneway Festival outgrew its humble Caledonian Lane digs, but the kilometre-long stretch along the Maribyrnong surrounding the Footscray Community Arts Centre shows it has maintained its commitment to oddly shaped spaces. And despite the festival’s growth, the line-up still bears the hallmarks of promoters who love music, and who aren’t just looking to drag in the biggest names.

The best bet on a hot February day was Melbourne-based record label Mistletone’s curated stage, which faced an idyllic sloping lawn – perfect for lying down and starting the day with the intense hardcore of High Tension, playing to what must be the most chilled-out crowd it’s ever seen. The burning sun seemed to have no effect on singer Karina Utomo, who screamed, crowd-surfed and still dutifully reminded the audience to slip, slop, slap. The Mistletone stage boasted the most consistently engaging line-up, from Metz to Battles to Beach House.

Over on the Dean Turner Stage, Royal Headache was worth it just to see the looks of surprise on the faces of the front-of-stage security guards when they kicked into gear. At the Future Classic Stage, Thundercat shredded up a bass storm and melted our faces. Battles made grown men hug.

One-day festivals are always tough for punters with eclectic tastes, and I was torn between an awkward clash of Grimes, Beach House and Vince Staples. It became clear Grimes was a non-option – getting closer than a block away from Grimes, or even seeing Grimes, was impossible thanks to the long, narrow and packed crowd at the main stage (see, there is still a laneway vibe). So I split the time between Staples, who did some amazing crowd work, and Beach House, whose blissfully dreamy records come to vibrant life with the addition of live drums.

After the sun went down, when the only light left was the glitter of the stage and the floodlighting of the shipyards across the river (“Look at that fuckin’ beautiful thing!” yelled Beach House’s Victoria Legrand, pointing to the moon), the big draw was Purity Ring. Grimes and Beach House might have bigger names, but Purity Ring’s compelling stage show won the night.

Surrounded by fairy lights, Purity Ring’s multi-instrumentalist Corin Roddick controlled a bespoke sequencer that looked like something out of Superman’s Fortress of Solitude, while vocalist Megan James channelled Stevie Nicks in a sheer white robe.

It was the pure, power-ballad synthgasm the Laneway crowd needed. The festival organisers could have just shoved Flume in the headline slot, which would have been a fine, popular decision. But choices such as Purity Ring show the festival hasn’t lost sight of what it’s here to do.