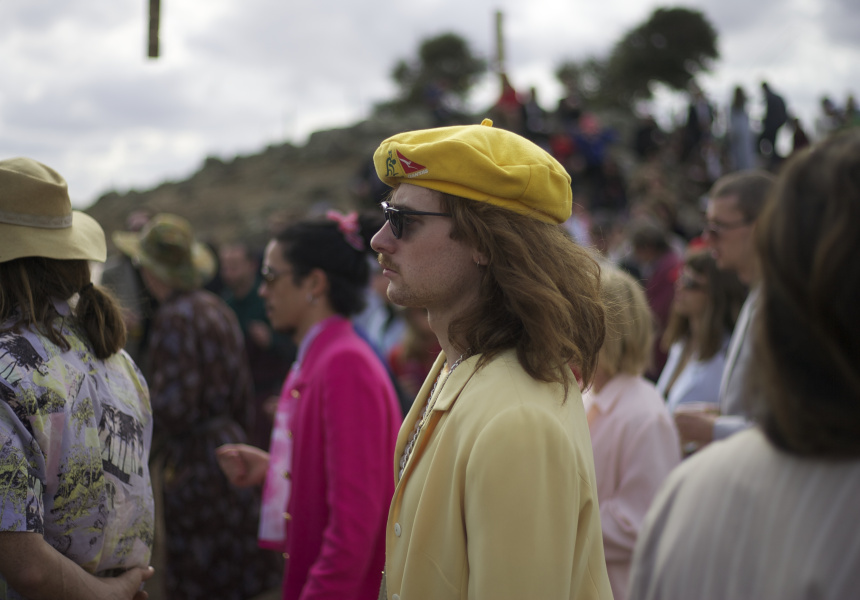 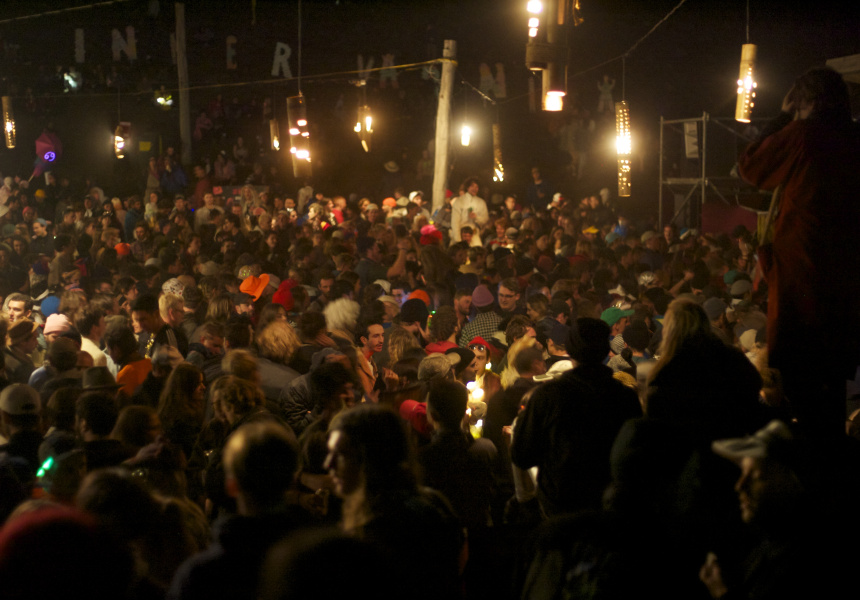 At the Inner Varnika site just outside of Bookar, about 20 kilometres from Camperdown, the seemingly endless plains of Western Victoria are broken by outcroppings of boulders that also attempt the same trick on your ankles.

The three-day festival is dedicated to dance music in all its forms. Highlights this year (its fourth) included jazzy synth, flute and saxophone explorations from Phil Stroud, highly flammable disco and house from Jayda G, brutal analogue odysseys from industrial legend In Aeternam Vale and the gilded melodic techno of Peter Van Hoesen.

There’s a bit of a Flintstones vibe to the whole thing. Despite the prehistoric-looking setting, it’s still surprising when a woolly man asks the information tent for cable ties so he can reattach an animal skull to his external ribcage, made from the bones of other creatures.

Less terrifying costumes were in abundance. One group was dressed in black skivvies and blue jeans with big gold chains draped around their necks. The outfit was seemingly unremarkable until you saw the top of their rave sticks, on which a framed portrait of a young Dwayne “The Rock” Johnson was fastened. It brought a tear to this writer’s eye to see one of the most important portraits of our time so faithfully recreated.

Few garments come as politically and culturally loaded as the beret. After the fedora gave any hat other than the baseball cap a bad name, it was surprising to see countless festival-goers at IV don the circular headgear favoured by artists and revolutionaries.

The hat also has military associations, from Ernesto “Che” Guevara, to the green beret of the American Special Forces, but it’s hard to imagine the ravers at Inner Varnika supporting armed resistance while their joyous dance moves kick up billowing dust storms. Perhaps the young dancers were more influenced by Parisian intellectuals of the early 20th century, who adopted the hat commonly worn by farmers as a way of dissociating themselves from their own class.

While it’s easy to point a finger at the irony involved in this fashion choice (tickets to Inner Varnika ranged from $150 to $230, and although far from the most expensive festival tickets available – Golden Plains 2017 tickets started at $366 – once the expenses of petrol, camping equipment, food, alcohol etc. are factored in it is hard to argue that attending a festival is not for the most part reserved for the privileged), it’s impossible to ignore the fact that some attendees of this festival are marginalised and considered outsiders.

Inner Varnika provides a safe space for explorations of non-hetero sexuality and gender fluidity, something that can be hard to find even in the heart of Melbourne. Transgender artist Terre Thaemlitz, aka DJ Sprinkles, was for many the festival highlight. As a music fan, it can be easy to forget how deeply unapproachable and experimental the heavy techno on offer at IV can be. To the uninitiated it can appear brutal and soulless, but for those on the inside, this barrier provides a haven for self-expression.

Regardless, festival-goers had another hurdle to overcome first thing Friday morning as they entered the festival. Local police turned out cars and inspected busses, leading four sniffer dogs on a hunt for illicit substances. With police inspecting belongings (and music critics over analysing their fashion choices) the avenues for IV attendees to get weird have become increasingly narrow. Sometimes the only way to beat The Man is to steal his tie. Suit Sundays have become a tradition at IV. Attendees donned formal business attire while carrying clipboards, handing out business cards and making deals on banana phones. The word “Internet”, punched out on a homemade label, was stuck to the blank screen of a powered-down computer monitor. Graphs representing the effects of nangs over time, inspirational jargon and office peeves were scrawled on an old whiteboard. “Please don’t print in colour” read one reminder.

The crowd at IV is young and many of the aesthetic choices on display were bewildering for an arts graduate pushing past 30. Was the spectacle of Suit Sunday a continuation of the pop art and Capitalist Realism promoted by Andy Warhol and Gerhard Richter? Would “Che” have admired this outrageous lampooning of the capitalist machine? Was “The Rock” now more revered than the Argentine revolutionary who changed the face of Latin America? Are these the musings of a writer too old to simply let go and relent to the undulating waves of bass?

The answers to these questions are unlikely to be provided by the revellers at IV. One can assume they just want to be left alone; free from the scrutiny of cultural critics, employers and law enforcement; free to get lost in the music they adore. As for the beret, maybe they just thought it looked cool on Alicia Silverstone in Clueless.