Women stole the show at what – at times – was a very mystical festival experience. 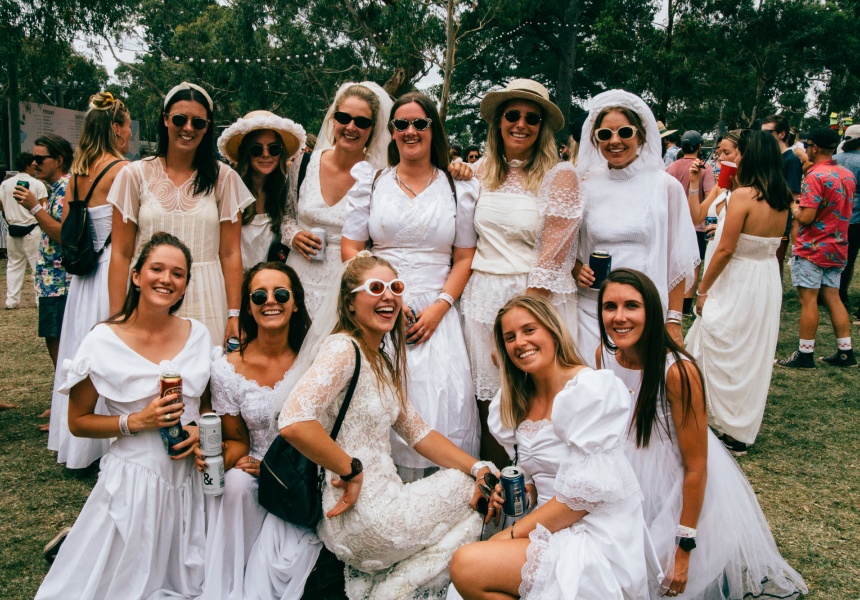 Don’t leave your girlfriend’s ticket at home. It can set off a series of unfortunate events that includes a service-station banana-custard doughnut stinking out the entire car (not my first offence), and a heated argument before the tents have been set up.

Meredith Music Festival 2018 kicked off with a set by the Aints, a truncated version of the original line-up of foundational Australian punk band the Saints. Aside from brass-induced ska flourishes, the band’s masculine ’70s rock was uncharacteristic of a festival at which women far and away gave the standout performances (at least 16 of the 34 acts on the line-up were either led by women or featured women). There was the widely-praised surrealist pop of Sui Zhen, the howling fury of Little Ugly Girls singer Linda Johnston, buoyant party pop from Clypso, powerful garage punk from Shrimpwitch, and a Saturday night closing set from Melbourne treasure DJ Jnett.

The first of those incredible performances came from matriarchal party monster Mim Suleiman who appeared on stage draped in iridescent green robes, backed by bongo playing DJ Ripton Lindsay. Many of Suleiman’s tracks were produced by house-music producer Maurice Fulton and feature his signature squelching boogie bass lines, tough snares and dense tribal percussion. But the Tanzanian singer’s sonorous vocals (sung in both her native Swahili and English) and irrepressible personality are what truly led the crowd to its first moment of unbridled ecstasy.

Suleiman completely overshadowed the higher billed Panda Bear who performed next. Despite some unexpectedly raucous bass production alluded to in Broadsheet’s recent interview, moments of pop brilliance were quickly abandoned in favour of obtuse tangents. Perhaps this was to be expected when you look at his solo material and work with Animal Collective, but that doesn’t make it any less of a drag when the party is just getting started.

As a result, there were rumblings that Suleiman’s brilliant set had come too early in the evening, but it was a smart piece of programming designed to give the festival an early evening booster shot. The same trick was repeated on day two when British grime MC Nadia Rose upended the entire amphitheatre with her festival-best set. The lyrics of a soon-to-be-released unnamed track (“No connection, no reception, aeroplane mode.”) reinforced what a relief it is to be out of service at MMF, but it was her penultimate track Crank It (Woah!) that took the crowd to ultimate dance-floor catharsis.

Many international acts have been confused when given “the boot” – a tradition started at the first Golden Plains in 2007 in which the crowd raises one of their shoes in appreciation of a particularly killer performance – but Rose got it straight away, yelling, “Yes! Everyone dust off your shoes!” as she threw her silver and white Nike Air Max 95s into the lighting rig.

While the tide might be turning on male-dominated festival line-ups, men still dominate some spaces away from the stage. On multiple occasions members of the Broadsheet team heard about – and experienced – harassment on the dance floor that made them and the people around them uncomfortable. MMF has a strict “no dickheads” policy, but not everyone sticks to it.

There were multiple instances where out-of-control attendees touched and grabbed women without their consent. This is a public safety issue, and festivalgoers have a duty to those around them to remain in control. I wish I'd been more proactive in the moment and alerted festival staff.

In sharp contrast, rapper Genesis Owusu’s firecracker 30-minute set on Friday night frequently subverted rap’s misogynist tropes. Owusu and his androgynous cabale were dressed entirely in black, with militaristic cargo jackets over dress shirts and slacks, heads shrouded in balaclavas. At one point a member of his entourage lay down at the front of the stage, sensitively stripping the petals from a red rose.

“This is a song about women and how we should respect and appreciate them in every area of our lives,” said Owusu before half singing, half rapping through Awomen Amen.

The Canberra rapper’s set was incendiary and progressive but some revellers I spoke to missed those subtleties.

“This is just some c**t selling T-shirts,” a young guy moving toward the stage told me, clearly thinking he was witnessing another commercial rap act (though it wouldn’t be the first time a rapper has pushed merch in the Sup’).

At a festival where so many of the standouts were MCs and electronic acts, Pond (which features several one-time members of Tame Impala) showed that psychedelic rock’n’roll is still fertile creative ground. Whether it was plunging to his knees during Fire in the Water while singing about Christopher Pyne, or literally bending over backwards to howl into the microphone, lead singer Nick Allbrook was an electric nymph. From synth ballads to funk basslines Pond showed what a remarkably textured band they are.

Several friends I spoke to before the festival were underwhelmed seeing the Presets so high up the bill (I also had my doubts). But as the midnight mist became inseparable from the static-filled screen silhouetting the band, it became clear why they’ve carved out such a long career. With its menacing “Naaaaahhh” refrain My People felt like an alternate national anthem for a country that at times seems to relish its larrikinism, Ghosts built on the fairytale fantasy of the festival grounds and Are You the One? has lost none of its potent electro-terror more than a decade since it was released.

Perhaps Hamilton was there the evening before on a stiflingly hot Friday night. Low grey clouds created a brooding atmosphere that trapped the heat and drained the energy of the crowd. But after midnight Korean-American artist Yaeji took the stage and something truly magical happened. She was like a house-music shaman; her whispered lyrics floating alongside deep bass and snare drums. “Make it rain girl, make it rain” repeated the spell during Raingurl at the pinnacle of her set. Then in a moment of pure synchronicity, the skies released their bounty, bathing the dancers below with just enough rain to unshackle them from their sweaty bondage. It was one of those moments that makes you believe the Meredith amphitheatre is truly a supernatural place.

Following the publication of this article Aunty Meredith reached out to Broadsheet to discuss ways in which to encourage the disclosure or reporting of the instances of assault mentioned in the story. If you have experienced sexual assault or harassment during the festival, Aunty encourages you to contact her directly via auntym@mmf.com.au or anonymously via helpdesk.mmf.com.au if you would like to share your experience.