After its final party we look back on white limousines, rose-water-scented towels and absolute dance floor freedom. 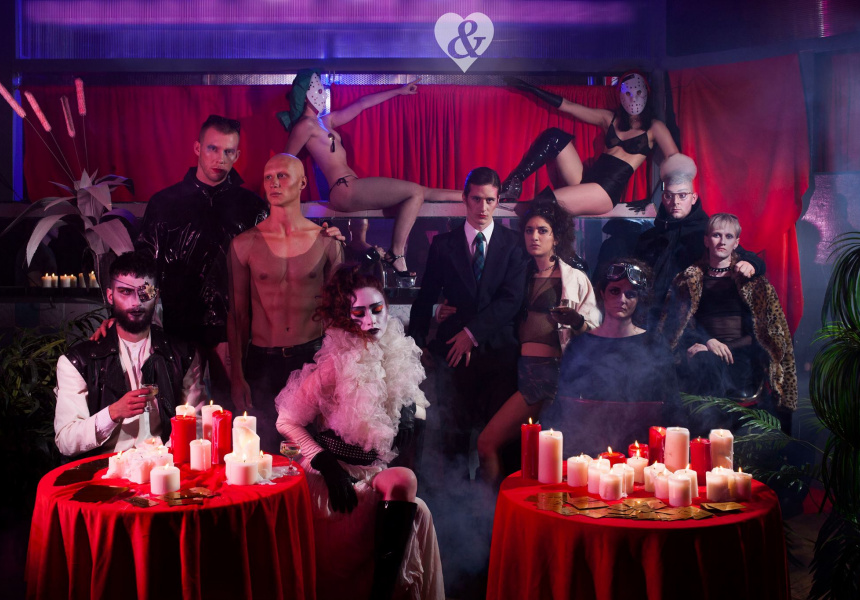 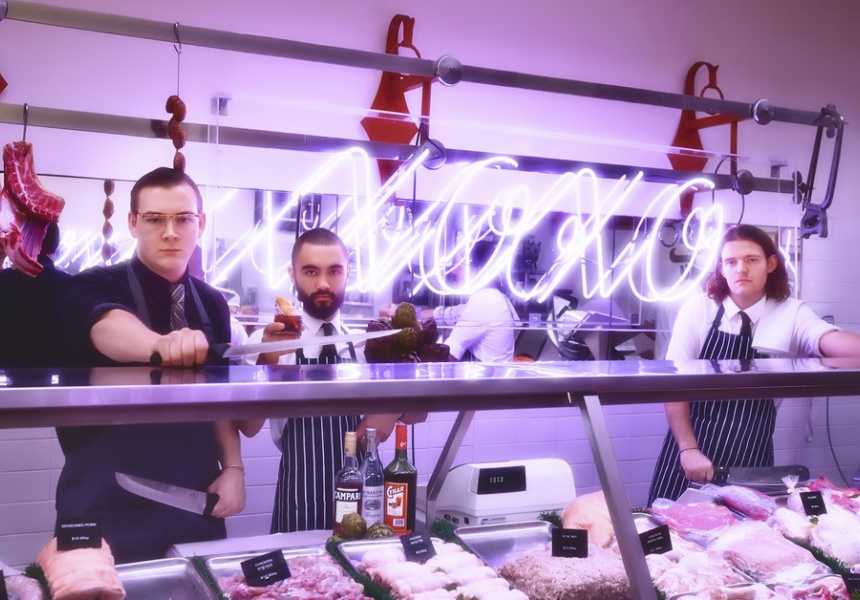 After eight years, Hugs & Kisses closed at 10am on Saturday morning. It was a sweat-soaked, joyous, 12-hour marathon of dance. With developers closing in on one of the last remaining boltholes in Melbourne's cultural underground, it's hard to see Hugs & Kisses being replicated again easily.

Taking Valentine’s Day iconography from a time when heterosexuality was the only public option, the nightclub subverted Hallmark-card sentimentality by allowing sexuality, gender fluidity and creativity to flourish between bouquets of flowers and perfume-laced air.

“I never really imagined when it would ever end. It’s been hard to come to terms with the impermanence of it,” says club owner Hugo Atkins, who founded Hugs & Kisses in 2010 when he was 21 years old. 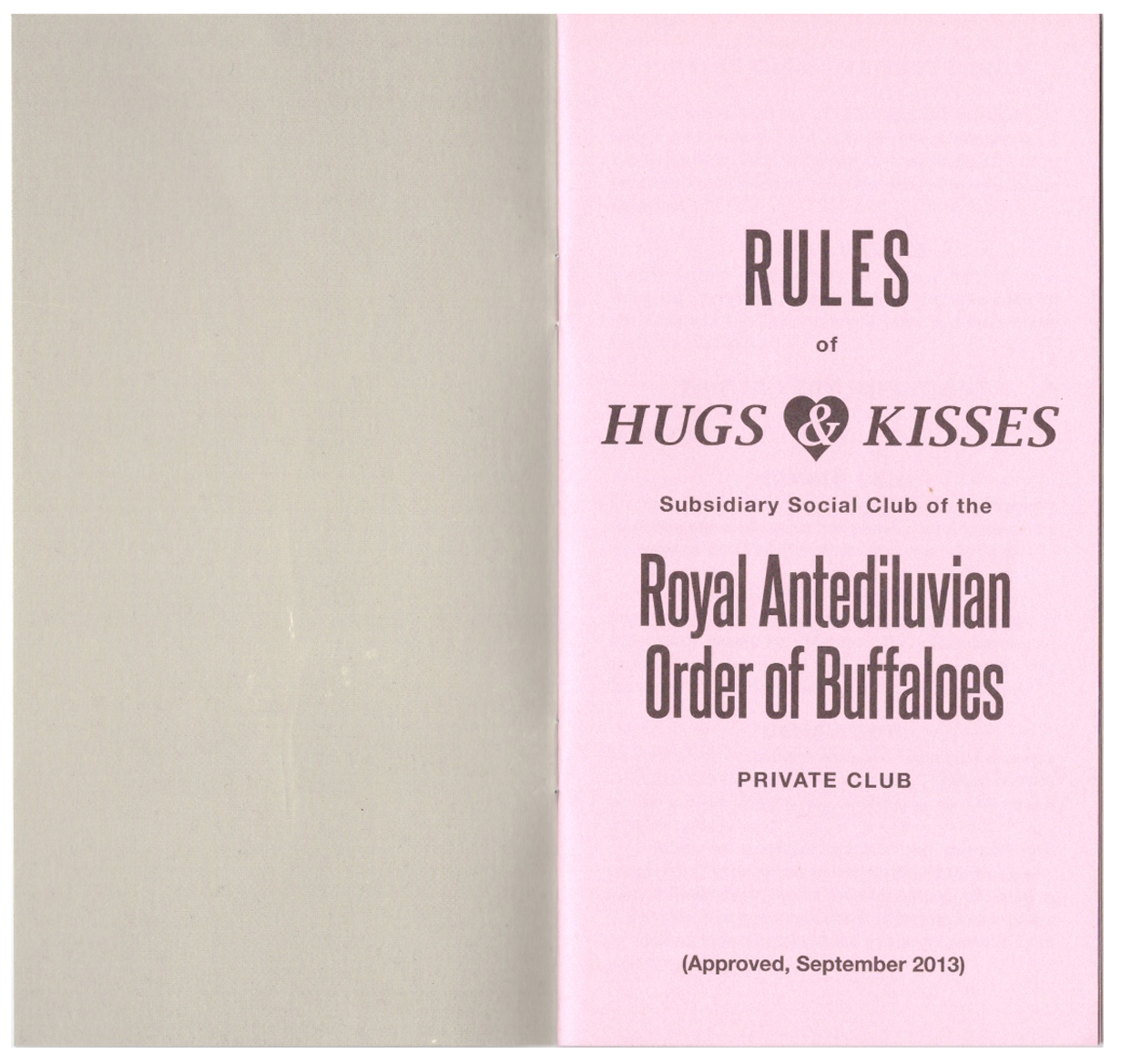 But impermanence has always been part of the Hugs & Kisses story. Until late 2013, when the club closed for a few months, it was named R.A.O.B G.A.B Buffalo Club after the Royal Antediluvian Order of Buffaloes (RAOB) – a fraternal order founded in 1882 that owned the building in Melbourne’s CBD and used it as its headquarters.

On Sutherland Street, in a warren of laneways off Lonsdale Street, Atkins operated Hugs & Kisses – under a tenuous licensing arrangement – as a subsidiary social club of the RAOB. Those going to the nightclub either needed to be a member or sign in at the door as a guest of one. Anyone was free to apply for membership by email. The RAOB’s club license allowed for parties, but Hugs & Kisses pushed those rules to the more extreme end of what was permitted.

“I’ve been operating under the assumption this place is going to close down any second,” says Melbourne DJ Brooke Powers who, after discovering the club, got a job running the door at its signature XOXO parties – nights when smooth house music met tongue-in-cheek romance. “I remember working the door and the cops coming in, the liquor licensing shutting down the club for 20 minutes to make sure everything was up to protocol.” 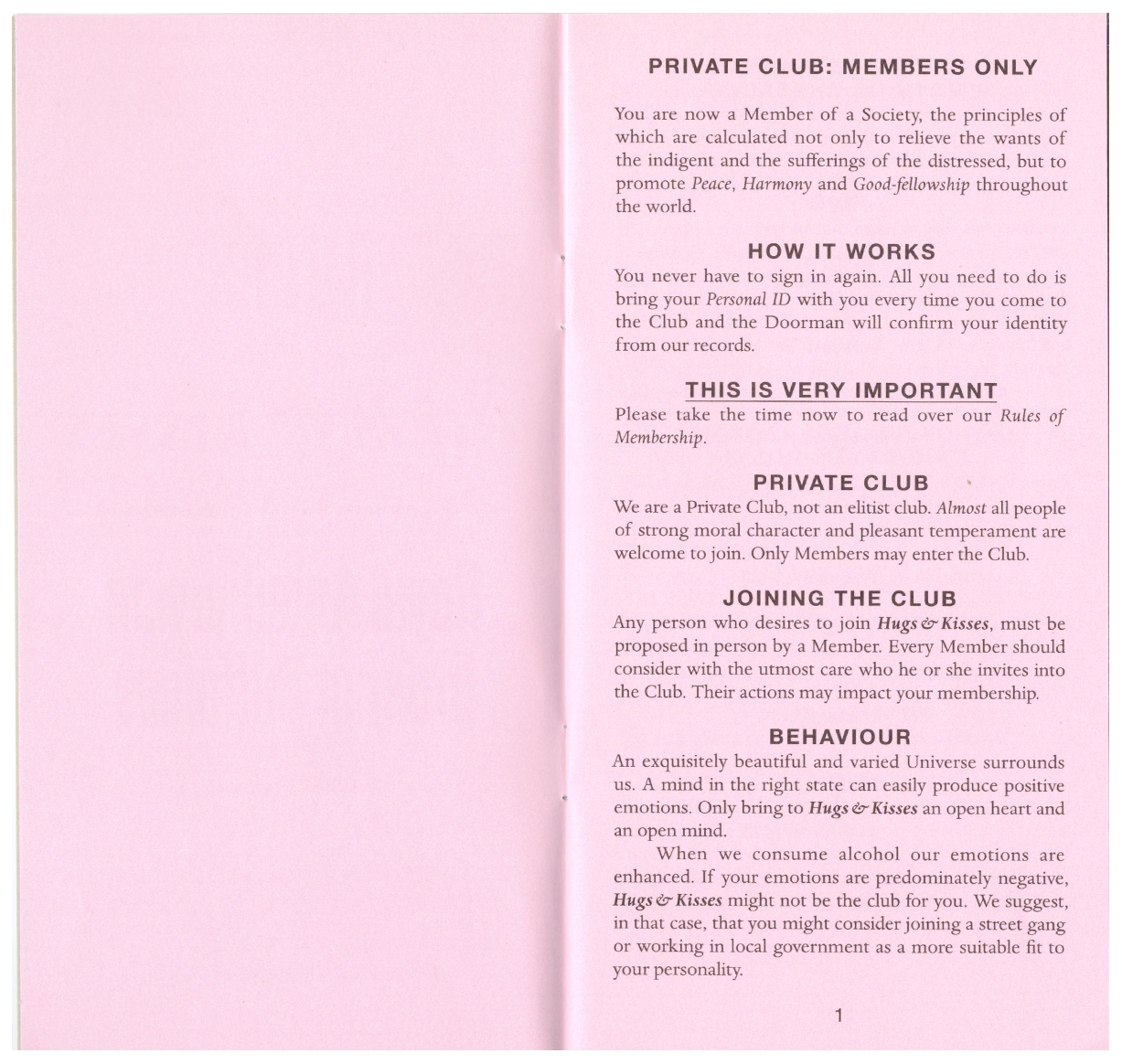 But in spite of – or perhaps because of – the club’s precarious existence, Atkins and a wide network of collaborators used the space to stage elaborate parties (one featured a giant Jar Jar Binks head), including the previously mentioned XOXO.

“We had an ivory-white Cadillac limousine that ended up in a ball of flames at a petrol station. This thing would drive around and we would pick people up from the suburbs in it. I think it was licensed for like 15 people or something insane like that. It had this red velvet roof and dark red leather chairs with mahogany details and crystal glassware. You could talk to the driver on this old wired handheld telephone,” says Atkins.

Upon entering an XOXO party you’d find massive balloons floating from the roof and bunches of roses and carnations spread around the room. In many ways it was like the DIY ’70s New York City nightclub the Loft, where its host David Mancuso would provide his guests with a bountiful table of refreshments, mixing records before disco DJs were even a thing.

“At 3am people would come out with platters of watermelon and sorbet,” says Atkins. “We had these frozen towels that had been soaked in orange blossom water or rose water. We’d give them to people on the dance floor at 5am when it was sticky and hot. You’d wipe yourself with this scented pink towel and then just discard it to the wayside and let it get trampled upon. They were pretty beautiful times.” 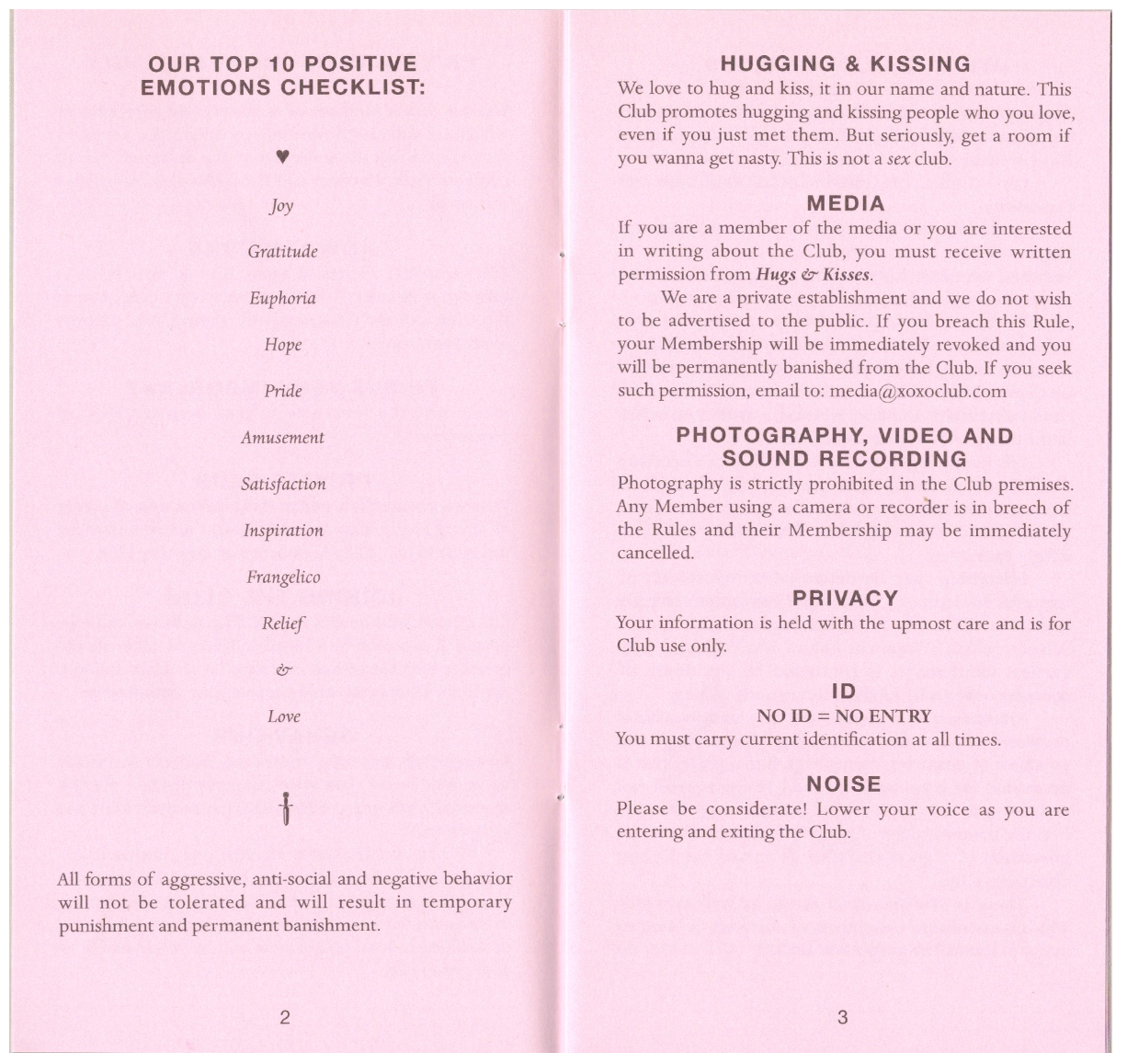 Despite the benevolent mission of the nightclub’s landlords – RAOB members come together for entertainment and to raise money for charity – the diverse community that flocked to the nightclub was a far cry from the homogenous male membership of the old club.

“We would dress up outrageously-in-your-face-queer and just go to this dingy dark club and it really didn’t matter who was running that night,” remembers Powers, herself a trans woman. “We knew it was our space and we could be whoever we wanted to be.”

On a given weekend you might walk into the club to find a night dedicated to Korean pop, dominating techno, ’80s industrial music, raging punks or beloved Melbourne DJ CC:DISCO! working the room over with a set of flawless disco and boogie. Diversity and acceptance reached a zenith at the Le Fag parties, for which Powers was the resident DJ.

“You find yourself there surrounded by a couple of hundred people from all walks of life. Queer people, all different kinds of trans expression. Lots of straight people too, people of colour, different body shapes,” she says of the parties that did away with the heart-shaped-chocolate-box aesthetic.

“There was always a point around four or five in the morning when the consciousness of being in this club surrounded by very hot people starts to ebb, starts to relax, starts to let go and all of these people start to sink into their bodies a bit more,” says Powers. “The room is filled with love and people dedicated to dancing. It’s dirty. Some people are naked, some people are having sex in one of the booths. People are smoking inside, people are graffiti-ing the walls.

“I think the word ‘play’ stands out. We grow up and we forget this quality of play that we have as kids and it’s really important to keep that. It’s what we get to do every time we go there.” 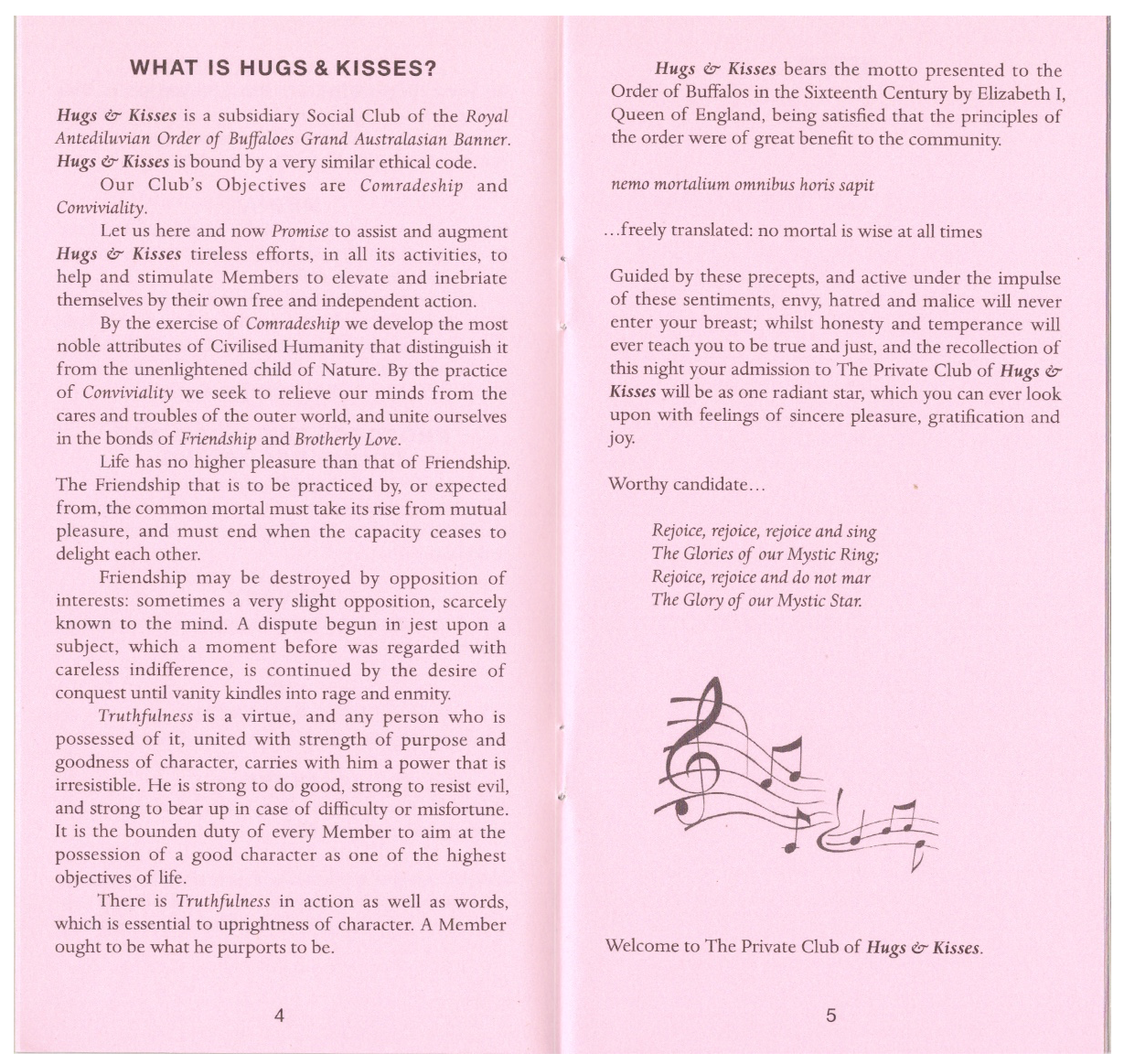 It feels miraculous that all of this was happening in a building that was once home to a literal patriarchy. Somehow, a building in which a 100-plus-year-old club made up of greying men dressed in robes and ornate necklaces was taken over by a bunch of ravers with a punk spirit and penchant for flower arrangement. But now the building has been sold – for a reported $6.25 million – and is likely back in the hands of often faceless developers, many of whom profit on the cultural currency venues such as Hugs bestow on Melbourne.

Another iconic nightclub that has serviced Melbourne’s underground music community for 29 years on Swanston Street, the Lounge, will close in April after it was outbid on its lease renewal by an unnamed Melbourne hospitality group.

“It seems like it’s getting harder and harder for these sorts of things to exist … thinking about what certain scenes and cultures are going to do and not having a place to express themselves is quite sad for a city like Melbourne,” says Atkins.

“I think at the time, when I was setting it up, I had the idea that something really special was happening, so I never really had any fear about it. I never really questioned it, it just felt like the right thing to do. I think that level of blinding confidence just helped it to exist.

“Hugs really stood for me as a place of absolute freedom. It showed that giving people that level of freedom doesn’t always mean there will be negative effects,” says Atkins. “I’m most thankful to the people who’ve come to the venue, the way they’ve treated it, and the kind of effort they’ve put in is what’s made it special.”

Hugo Atkins would like to thank all the artists, dancers, designers, performers and promoters that helped make Hugs & Kisses what it is, and acknowledge the traditional owners of the land, the Wurundjeri people of the Kulin nation, and pay respect to elders past, present and emerging. Sovereignty never ceded.