The Dark Mofo festival in Hobart is like no other. We sent one unreliable narrator to the, “darker, weirder”, winter event to report back on highlights. Instead, he got himself abducted. 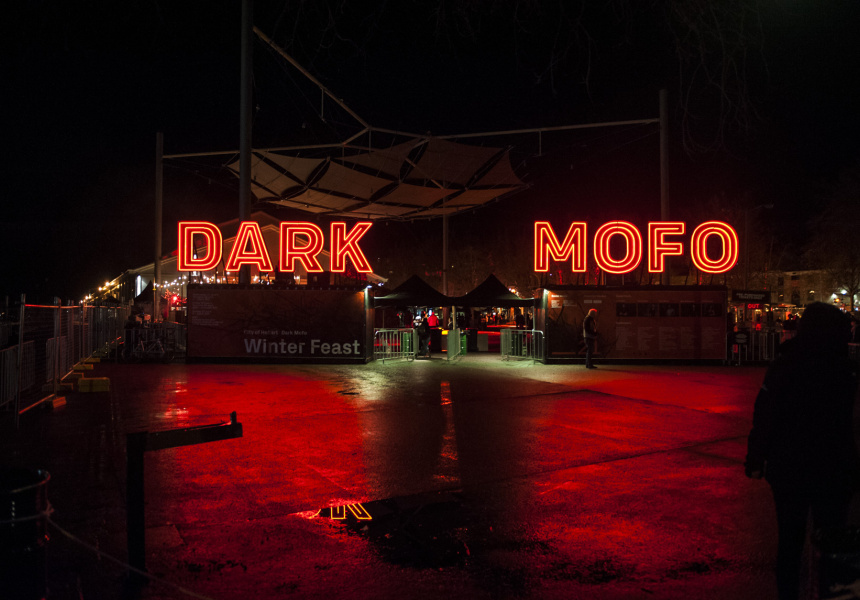 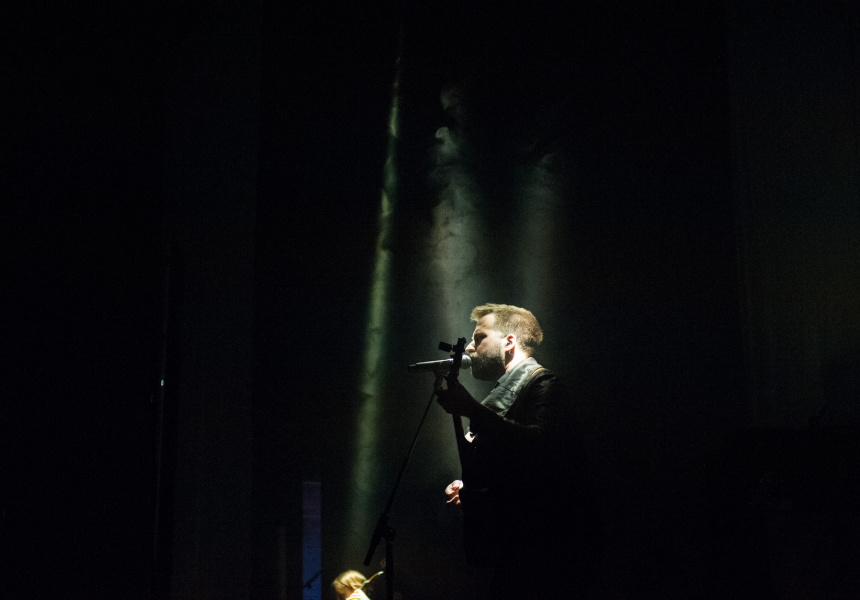 I was mid-conversation on the dancefloor when a strange girl in a white jumpsuit stood in my way. “Are you ready to come with me?” she asked. It was a party at Dark Mofo. I said yes. “Are you claustrophobic?" No. "Are you prepared to do anything I say?” Sure. She led me to the top of the stairs, spun me around, and fastened me in handcuffs and a leather blindfold. Someone pushed me down the steps on to the street, and into a car which drove off at frightening speed. “The safe word,” someone said, “is ‘bananas’”.

You might have heard that Hobart’s winter festival, Dark Mofo, isn’t like other festivals. You don’t get a wristband. You don’t camp. Instead of a headliner, its main attraction might be a frequency, or a single light. Or lack of. What’s more, you won’t know this until the festival has begun. Dark Mofo inspires curiosity in its participants by not giving them what they thought they wanted. Except the food. Oh God, the food.

In its decadent three years, the “darker, weirder”, Hobart winter arts festival has not been without its embarrassment among riches. In 2014, huge crowds for the Winter Feast and semi-regular bacchanalian party, Faux Mo, threatened to stifle its sense of discovery. An experiential arts program flickered in the long shadow of 2013’s iconic debut, which saw Rjoyi Ikeda's towering light-column, Spectra, and Kurt Hentschlager's smoke-filled room, Zee—which put at least seven people in hospital with seizure-related symptoms—instantly become synonymous with the event.

This year organisers addressed those issues with saving grace. The decadent feast, which has quickly become the most unifying aspect of the program, stretched to five nights instead of three. Faux Mo was reborn as the communal, orgiastic Blacklist, and the fabulous Dark Park precinct recast a deflated industrial corner of Hobart waterfront as a funhouse of sonic and visual installations, which also doubled as a tool to thin crowds at the feast. Organisers may never atone for their sins, but they’ve become deft at singulating tones.

Up the Derwent at MONA—festival HQ, spiritual brainbox, and home of founder David Walsh—the newly installed exhibition, Private Archaeology, by New York-based performance artist, Marina Abramovic, brought a serendipitous through-line to Mofo, absent since the excellent Red Queen exhibition in 2013. Although the largely retrospective work percolated neatly throughout the museum, it was interactive piece, Counting The Rice, that provided the perineum between museum and festival.

Guests who entered the exhibit were instructed to leave their belongings in a locker and don a white smock and noise-cancelling earmuffs before moving into a large hall. There, a cult-like scene: dozens of silent participants at a long table, painstakingly separated grains of rice from lentils. Led by an instructor, I accepted the task of counting my pile and recording each grain on a piece of paper with mild humour. Abramovic says that a desirable effect of the piece is to make people forget about their phones for a while. When counting grew tiresome and my hand drifted to my empty pocket, the embarrassment hit as both banal and personal.

Another performer who refuses to be captured by phones is Antony and the Johnsons. I can’t imagine what lummox would consider a phone’s existence during the singer’s set at the glorious Odeon theatre, backed by the Tasmanian Symphony Orchestra. You need no familiarity with Antony Hegarty’s music or tremulous voice to succumb to the performer’s singular universe, which at one point had a hardened orchestra violinist openly weeping on stage. As a performer Antony is elusive, at times looking lost and unsure, then shamanistic, harnessing great waves of emotion that ripple her features. The expansive TSO seemed meek in her presence, and the house lights uncovered a tangle of hands wiping away tears.

While Antony’s show inspired a raw kind of emotional rapture, another phantom spectre at Dark Mofo threatened to break hearts - literally. Bass Bath is the brainchild of Melbourne sonic manipulator Byron Scullin and Faux Mo/Blacklist curators Supple Fox, and it involves signing a waiver confirming you don’t have a pacemaker, unborn child in your belly, or fear of losing your hearing.

But back to being abducted from Blacklist. I felt myself being shuttled around the city. I was led through unseen places. At one point a flash went off, and I seemed to return from where I came. Strapped in again and my sight returned, I saw a long-limbed nymph in head-to-toe black, writhe for me in black tinsel. Her video screen mouth sang a love song. All blacked out again, and I was dumped on the footpath where I began. My restraints were removed, and I was handed a still-developing image that showed me in a whole new light.