Ahead of the duo’s album launches at the Shadow Electric this weekend, Melbourne’s purveyor of “polite” house music talks the art of subtle persuasion, late-night table tennis and being vulnerable. 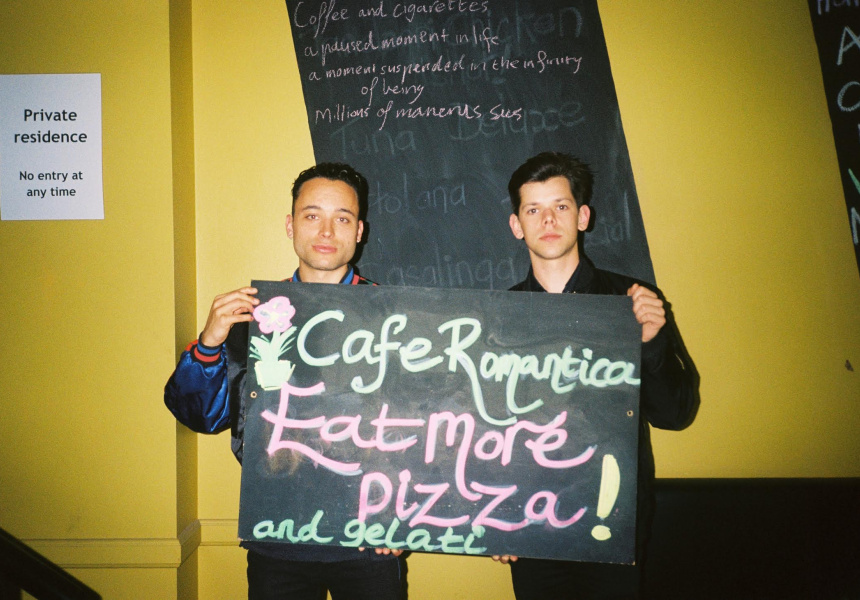 Andras & Oscar sit somewhere toward the lighter side of Melbourne’s dance-music spectrum.

“It’s polite. If it persuades you, it does it gently.”

The duo’s debut full album may bear the name Cafe Romantica – after Lygon Street’s 24/7 Italian venue for late-night tête-à-têtes – but don’t get the wrong idea. This is not the duo throwing you onto a bed and having their way with you; this is them mixing you a Campari and soda and gently grazing your arm as they hand it over with a longing look.

Both individually successful in their own right as Andras Fox and Oscar Key Sung (real name: Oscar Slorach-Thorn), the pair decided it was onto a good thing after the critical success of its 2013 EP Embassy Cafe, released on Dutch label Dopeness Galore. One year on, Cafe Romantica is casual and synth based, with Andras’ pared-back production delicately balancing out Oscar’s pleading vocals. The duo’s sounds are soulful yet nervous, and always oozing leisure.

But if it’s not ripping up dance floors, what do Andras & Oscar envision people doing while listening to their music?

Slorach-Thorn suggests, “Having wines with four friends, making fun of mutual friends and having a little dance while doing it.” Wilson takes a different route, recommending seduction as the ideal activity. Just not for him.

“That would be a funny thing to do – trying to seduce someone by playing your own music. Hopefully we have better moves … actually ‘moves’ implies there’s some sort of trick to it … ”

“I would say I have the moves,” Slorach-Thorn says.

Moves or no moves, the pair set out to make a romantic album. Even admitting this fact sets Andras & Oscar apart from their more club-focused and up-tempo dance music peers. It has helped them to create a niche for themselves in the Australian music scene.

Wilson and Slorach-Thorn discovered their simpatico while living in a West Melbourne warehouse together a few years ago.

“Table tennis was a big part of it,” says Wilson.

“We’d both go out to a party on Saturday night and then at like 12.30am we’d both be back at home … wearing our dressing gowns and making music and playing table tennis instead of partying.”

This scene sounds like the ideal environment for creating Andras & Oscar’s music, most of which is improvised.

“A lot of it happens in call and response, or on the spot,” says Wilson, “That’s when we make the best music.”

Despite claiming he’s never felt quite comfortable within either the dance music or band worlds, it’s clear that both have warmly accepted Wilson’s output through Andras & Oscar, and what better proof than being selected to appear on Cut Copy’s recent compilation Oceans Apart; a comprehensive who’s who of Melbourne’s underground dance music scene.

“I actually used to think that dance music was for dumb people,” says Wilson, “But it’s fun being dumb, I’ve realised.”

“Although I think I have a really skewed perception of what is dance music – the most clubby songs I’ve written always get put on Best-of-Chill-Out-Ibiza-type compilations.”

Andras & Oscar is launching its album, Cafe Romantica, at the Shadow Electric inside the Abbotsford Convent this Saturday and Sunday.