(Wo)man in the Dark

One half of seductive Danish-Canadian duo Rhye talks anonymity, James Turrell and subverting the idol-worship of pop music. 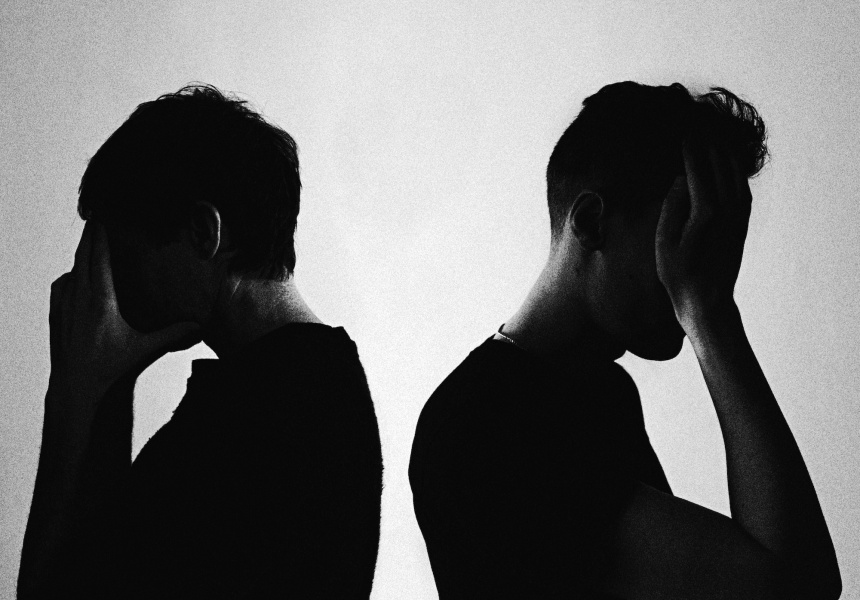 Mike Milosh, one half of Rhye and the voice of its incredible debut album Woman, is not, contrary to popular belief, a woman.

When the Canadian-Danish pop duo released its first album in 2013, it sounded more like it had drifted in from 1984, when Sade’s album Diamond Life was high up the charts. Like that album, Woman is effortlessly laid-back, sultry and smooth. It’s impeccably layered with synth and sax, and it’s sexy. The songs are simple and emotionally open, and Milosh’s vocals are high-pitched, beautiful and honest. Coupled with the cover art – a moody black-and-white photograph of an anonymous woman’s décolletage – critics were initially excited by this new pop songstress.

I’m not the first person to make the Sade comparison. “My whole career I’ve been compared to people like Sade,” Milosh says. “Okay, I get it, I have a gentle tone. But I didn’t think people would actually think I was a woman. I think once one person said it, everyone said it.”

While he insists that adding to the gender ambiguity of the record wasn’t a deliberate move, Milosh quite enjoys that people didn’t look closely enough at the album’s credits to see that the vocalist is called Mike. “That’s kind of neat,” he concedes. It’s a recurring interest of Milosh’s, and it’s become the MO of Rhye: shifting attention away from the personalities behind the instruments and back to the music.

“I wanted people to hear the music and not care who I am or what I look like,” he says. “When I was listening to music when I was younger I didn’t listen based on who it was, just what sounded cool. I like that way of music unfolding.” There will be no photos of Mike Milosh adorning the covers of Rhye records. “But the credits were always there. I wasn’t in the shadows, but I wasn’t at the forefront.”

Yet “in the shadows” is exactly where the band remains when it performs live; often, in fact, in near-darkness. Is that part of the same project of defying pop’s cult of personality? “I was just sick of people disengaging with the live show and just watching their cell phones,” says Milosh. “They’re not in the moment. So I try to gently encourage people by making it dark enough that they can’t film it.”

The other half of Rhye is Danish producer Robin Hannibal, who makes this kind of neo-soul pop with his other project, Quadron. Add to this the romance of Milosh’s electronica-infused solo work, and the bones of Rhye are there. But Woman is more than the sum of those parts. It’s built on the simple foundation of drums, bass and synth, with extra flourish coming from strings and horns.

Milosh was influenced by artist James Turrell, who uses light to force his audience to reconsider space. “Obviously I didn’t have the budget that Turrell has to create those set-ups,” says Milosh. “But what I could afford to do was to make things dark, just using the lighting in the venue.”

It’s music naturally suited to low lighting. And darkness is meditative, he says. “It becomes an exploration into yourself, and you give in to the artwork. I liked the idea that there’s no fixed point to look at.”

Rhye plays at the Foxtel Festival Hub as part of the Melbourne Festival on October 21 and 22. Tickets available here.